Moving into 2005, though lain had inspired me to seek out more anime, I faced a couple roadblocks that prevented me from fully immersing myself right away. First, I lacked time. Though I had loads of free time in high school, I’ve long had a hobby of collecting hobbies, so anime had to compete with comics, video games, literature, guitar, film, and whatever else grabbed my interest.

Second, and more critically, I lacked funds. This was 2004-6, and most anime series came out on multiple discs, each costing at least $20, and I just could not afford spending that much, especially sight unseen. Many would’ve just pirated what they wanted to watch, but I’ve always felt uncomfortable with piracy. Besides, it would’ve been difficult to justify using up that much bandwidth on the family computer.

So, the first place I had to go was the local Blockbuster Video and rent things. Unsurprisingly, the selection sucked, and some of what little they did have I couldn’t rent anyway. I remember looking at Steel Angel Kurumi, knowing there’d be no way to explain 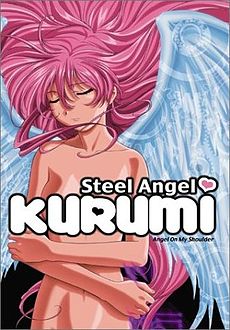 that cover to my parents, but feeling curious nonetheless (not about the plot, I’ll admit). I did get a few things out of the place, though.

For one, they had the Cowboy Bebop: Best Sessions collection, and later on the film as well. Akira was another memorable one, though I didn’t really appreciate it until I saw it again just last year. They also had a variety of Studio Ghibli works, namely Castle in the Sky, Princess Mononoke, The Cat Returns, and Grave of the Fireflies, which I’ll admit is the only film to ever make me cry. Speaking of Ghibli, my local library actually had My Neighbor Totoro, the old Fox dub-only release. Oddly enough, the library also had Martian Successor Nadesico, but only the first volume; I’ve heard that it’s a highly allusive show, so most of the jokes probably went over my head anyway.

I should also mention that Blockbuster had some Neon Genesis Evangelion; they had both films (Death and Rebirth and End of Evangelion), but only the first two volumes of the TV show! So, I got my exposure to Eva early on, the first third or so, anyway, but once again I’d have to wait to see all of it. I didn’t check out the films because I figured I wouldn’t understand the “End” of Eva without having seen the first part; little did I know that years later, I wouldn’t understand End of Eva even after having seen the original TV series.

Anyway, in Spring 2006 I got my first part-time job, and also found an anime rental place nearby. Suddenly, I had a wide range of shows to choose from, but alas, the shop closed up just a few months after I started going there. I did, however, round out my Ghibli viewing with Porco Rosso, Nausicaa, Castle of Cagliostro (which also introduced me to Lupin III), and Pom Poko, which remains to this day the most creative use of balls I’ve ever seen in any medium. I suspect, and hope, that it will retain that title for many years to come.

They also had Haibane Renmei, which cemented my appreciation for ABe. Unfortunately, I only got through the first two volumes before the store’s closing, and it took the better part 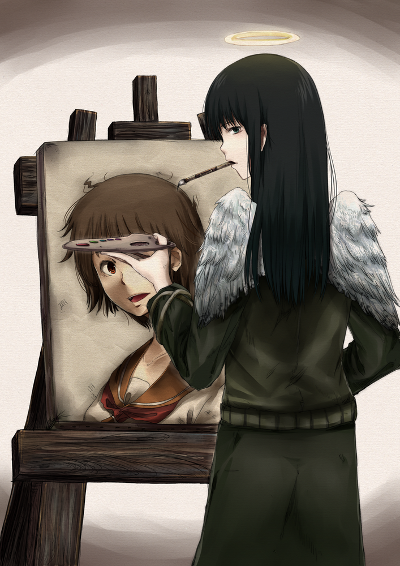 of a year before I could see the rest. If you’ve noticed a pattern of me starting a series and struggling to finish it, you’re right; that was a common theme of my anime-viewing experience for my first few years of fandom. Perhaps I should also add that, at the same AnimeFest I mentioned last week, my sister also got ABe and Ueda’s signatures, in her case on a Haibane lithograph. Ueda, perhaps to be extra nice, drew a sketch of (himself as?) a smoking haibane. I don’t know if smoking is something to share with a thirteen-year-old girl, but my sister and I have both always found Ueda quite cool because of it.

Now, I did manage to buy a few titles, despite my meagre finances. One was Metropolis, which I believe introduced me to Tezuka (insofar as it’s a Tezuka work, anyway) and Rintaro. I liked it quite a lot at the time, but a few years later found to my surprise that the film acutally wasn’t well-received by some fans. I haven’t seen the film in years now, but maybe I was just too undiscerning still? I also got another show with an ABe connection, Niea_7, which was something of a mixed bag, but it had some good moments and I liked the characters enough that it was well worth watching.

I tracked down a copy of Whisper of the Heart after seeing The Cat Returns, which quickly became a favourite for both me and my sister. I also found another of my long-time 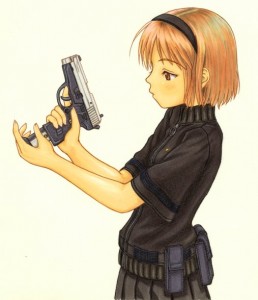 favourites, Gunslinger Girl, though that also took me a little while to get all three volumes… Y’know, typing this up, it occurs to me how nice box sets are. Anyway, a few years later, my sister and I did our only-ever cosplay as Hentrietta and Giuse at… A-Kon 2010, maybe 2009.

Those are the highlights of what I watched, but I should also talk a little about how I watched these shows. At first, I had to watch them in the living room, typically when nobody else was home. Partly because I rarely had control over the TV and nobody else wanted to watch Japanese cartoons, and partly because I didn’t want my parents around if I got hold of something risque. Later, after getting a PlayStation 2, I watched them in my own room, which made things much easier. Also, I watched a lot of these shows with my little sister, and in fact still do. Actually, the best thing anime has done for me is given me something to share with her, and it’s also provided the two of us with a whole host of running, inside jokes.

Now, at this point, though I’d gotten my feet wet, anime was still just one of several interests. However, after graduating high school in 2006, I entered university in the Autumn, which would introduce me to several other fans, new shows, and force me to focus my interests.