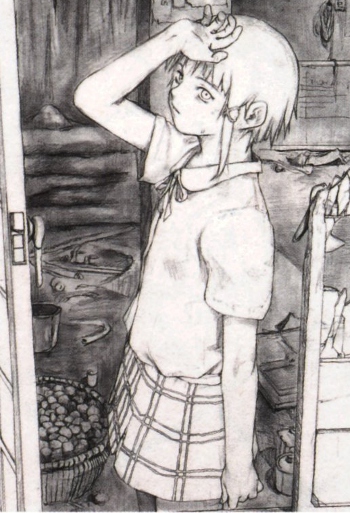 That’s a rather weak god who needs to have worshippers, and Lain (or someone else?) exploits that by destroying Eiri’s believers.

That doesn’t work, but Lain does destroy him with a different approach by pointing out that Eiri’s existence is contingent upon other people and things, and thus undermines his authority; in fact, she asks him outright who gave him the right to proclaim himself a god. Now, I’ll admit that I’ve never fully understood this part of the story; Lain effectively proves that Eiri is merely an imposter, but why does this destroy him?

One hint may be Lain’s assertion that Eiri cannot understand the true god because he no longer has a body. A man is composed of multiple parts, material (i.e., the body) and immaterial (e.g., the intellect and will). If the immaterial mind is destroyed while the body still exists, a man goes mad; if he goes mad after having already lost the body, though, I suppose he would be destroyed completely, as happens to Eiri.

Now, that’s not exactly rigourous, so if anyone has a better explanation I’d be very interested in hearing it.

Another unclear point is what exactly happens to Lain after this. A duplicate Lain claims that she’s a goddess now, which seems plausible enough. She’s effectively omnipotent and, as far as I can tell, omniscient and omnipresent as well. Since she exists without anyone being conscious of her, her existence and power appear not to be contingent on others, in contrast to Eiri. Lain doesn’t seem comfortable with the idea, but she also doesn’t deny that she is a goddess.

So, is Lain a goddess? I would say yes, she is.

Obviously, she is not God in the sense of the “God of the Philosphers,” i.e., the Uncaused Cause, because not everything is contingent upon her, and she has a beginning in time. However, in polytheistic religions, e.g. Greek mythology, several gods have a beginning. Yet, they were still considered gods, being a higher sort of being than man. Something similar to angels, perhaps.

Furthermore, many of these gods became patrons of something. Every mountain, forest, and so on had its patron god or guardian spirit; cities would choose some god as their patron, and even arts would have their patron gods.

How appropriate, then, for the Wired/internet also to have its patron goddess.

One final oddity is that most of the series seems to take a materialist viewpoint. Eiri says explicitly that everything about mankind can be explained in materialistic terms, and while he’s not reliable, other characters also make similar claims. Though some of the stuff about the “collective subconscious” seems mystical, the show relates even things like this to the Schumann Resonance, evolution, and the like. Since there is no fully reliable character in lain, it’s possible that they are mistaken in their materialistic explanations; alternatively, perhaps Lain can be explained materialistically, and she is only a goddess effectively or by analogy. In the former explanation (that the materialistic explanations are incorrect), can the God of the Bible exist in this (lain‘s) world? Certainly not. The gods of Classical mythology? Only if they are “gods” in the same effective or analogical sense as Lain. The God of the Philosophers? Probably.

Interestingly, and lending support to that last idea of the God of the Philosphers existing, or at least being plausible, in lain‘s world, Lain herself seems to refer to the existence of a deity in her final dialogue with Eiri, referring to him as a proxy for someone else. When Eiri asks, “Are you saying there really is a god?” she doesn’t deny it, but simply says that because he does not have a body (and is thus incomplete even as a human?) he cannot understand. The implication seems to be that, contrary to Eiri’s claims, God does exist, at least in some fashion.

One mark of a great show is that it can stand up to heavy analysis, and lain is the only anime I can think of off the top of my head that could justify a post on theology. The show also touches on many other topics I’d like to write about, like the importance of the body and of communication with others. For now, though, I think we can place a bookmark in this topic.