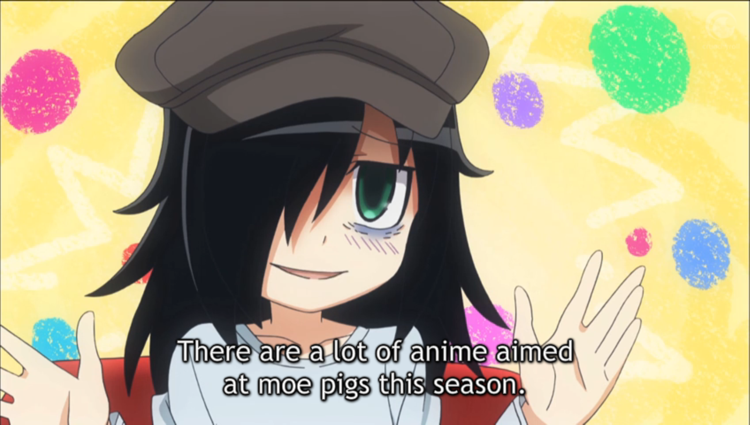 I’ve been following Tanigawa Nico’s comedic manga Watamote (short for the succinct Japanese title, translated: No Matter How I Look at it It’s You Guys’ Fault I’m not Popular!) for about a year, and like it enough that I’ve imported the first three Japanese volumes and am reading them at that slow, agonising pace that characterises my attempt at that language. When the anime adaptation was announced, I had mixed feelings. On one hand, Watamote is often almost painful for me to read because of my low tolerance for second-hand embarrassment, which is a constant in this series, and animation would likely only make that worse. On the other, some things do benefit from the switch to animation, especially if the writers try to expand on the story a bit.

So, our protagonist is Kuroki Tomoko, just beginning her first year of high school and optimistic about her prospects for enjoying her school years. Unfortunately, she also has to deal with more than her fair share of social anxiety. For example, she struggles in things as simple as returning a “good-bye” to a teacher, and congratulates herself for navigating an interaction with a convenience store clerk when buying snacks. So, at first glance, she seems like a rather sympathetic character, especially for those of us who were rather shy and introverted in high school, ourselves, and she’s not totally friendless; she does occasionally meet with a middle school friend, Yuu, who went to a different high school. Watamote‘s catch, though, is that many of Tomoko’s problems are her own fault, and though I wouldn’t call her a bad person, the show is frank about her other problems – she’s judgmental, a bit lazy, jealous of others’ success, and occasionally dishonest.

For example, in one episode a cousin of hers, Chii, spends a weekend at her house. Chii is a few years younger, obviously looks up to Tomoko, and seems like a genuinely kind person. Tomoko doesn’t need to do anything to deserve Chii’s love, yet she feels the need to impress her by, among other things, lying about having a boyfriend. Of course, the lies blow up in humiliating fashion.

Though the basic structure for most episodes involves Tomoko coming up with a scheme to improve herself and get popular only to have the plan backfire, there are a few nice moments. Tomoko getting a small wish granted while watching a meteor shower, for example, or spending an afternoon during her school’s cultural festival with Yuu and realising, with some surprise, that she’s having fun, with a friend, and at school of all places, are a pleasant break from the bleak tone of most of the series, and quite enjoyable to watch. These scenes are probably made more pleasant by their juxtaposition to the rest of the show, and keep the show from feeling too relentless. 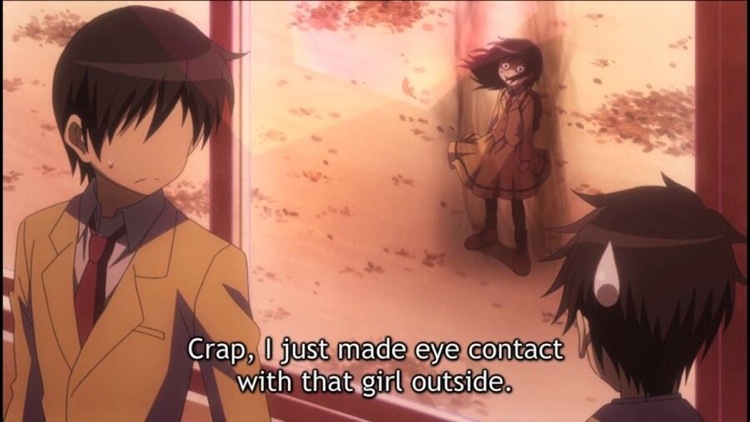 The festival would’ve been a perfect place to end the series on a positive note, but there’s one more episode after that where the writers get one more parting shot at our poor heroine. It does pull its punches somewhat, though, so the show doesn’t end on a total downer.

The series is very episodic, and Tomoko doesn’t really progress in any way that I can tell; she’s in basically the same situation at the end of the show as she was at the beginning, with only the faintest trace of optimism for the audience to grasp onto. That doesn’t bother me much, and the comic hasn’t really gone anywhere, either, but I would have appreciated giving the audience some sense of satisfaction at the end.

Several people have praised Kitta Izumi’s performance as Tomoko, and rightly so; I rarely pay much attention to voice actors, but she’s tough not to notice in this case. She also did a fine job on the ending credits song, sung in Tomoko’s voice, which I imagine was fairly difficult.

The animation is pretty good; I like how they handled lighting (see, e.g., the polygonal-shaped light from the windows below), which is a style I don’t recall seeing before. 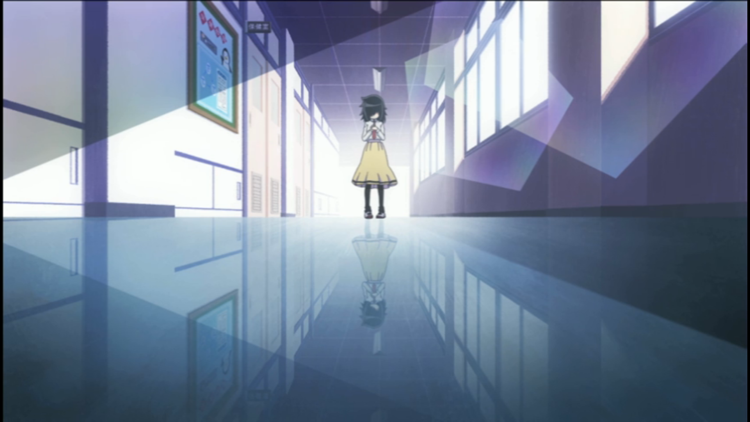 So, is Watamote worth watching? If you’re a fan of the comic, yes. There aren’t any major changes, but details here and there to expand on and tie different events together make this adaptation slightly better than the source material.

If you haven’t read the comic, go ahead and give it a shot if you’re interested; you’ll know after just one episode if you’ll like it or not. You probably won’t like it if you can’t identify with Tomoko (or, I suppose, if you identify with her a little too much), but if you can relate with her a bit, then you’ll probably enjoy the show.

Oh, and on a final note, am I the only fan who thinks “It’s Y’all’s Fault I Ain’t Popular” sounds more natural than “It’s You Guys’ Fault I’m Not Popular?” Maybe it’s for the best that I’ve never been hired to do localisation work.