Got back from a week-long trip to London a few days ago, and I celebrated my return with a whole bunch of new comics.

I started off with volume two of A Certain Scientific Railgun, which has one of the most convoluted origins I’ve ever encountered. Railgun is illustrated by Fuyukawa Motoi, and is a spin-off of a light novel series, A Certain Magical Index, written by Kamachi Kazuma (Index also has its own, separate comic adaptation). Seven Seas publishes Railgun in North America, but not Index (comic or novel version). I’ve heard they released the spin-off first because they expected Funimation to have released the anime adaptation, but in typical Funi style they have the license but now, months later, still no actual release, but Seven Seas decided to just go ahead with their own Railgun release schedule anyway.

Fortunately, none of that seems to matter much to enjoying the graphic novel. I haven’t watched or read anything of Index/Railgun besides Seven Seas’ release, but I never feel lost reading it without any prior knowledge. Most of the basics of Academy City, psychics, and other stuff important to the plot are explained well enough through dialogue or brief infodumps between chapters. This may be a spin-off, but I never feel like I’m missing out on anything important.

As for the comic itself, it’s very well constructed. The art is detailed without feeling cluttered, panel layout flows smoothly, and the characters are all appealing and memorable. The story has more action than I expected, especially the second volume.

Railgun does come up weak on its humour, though. It relies too much on fan service, like girls grabbing each others’ boobs in the shower or a character doffing her pants in public after spilling coffee on them. I don’t mind fiction stretching what’s plausible for the sake of humour, but really, who does these things? Besides, this sort of fanservicey humour is so overused it’s just not funny anymore.

That said, I do like the series enough to pick this up while in London: 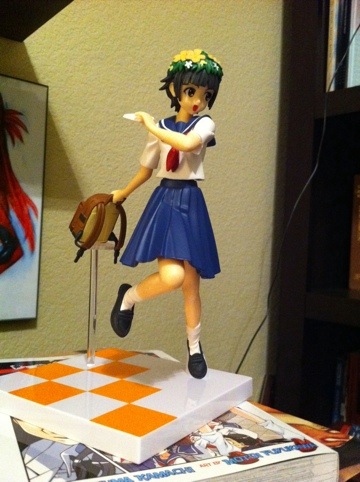 Yep, it’s Uiharu. Because animu exactly why I went to Glorious Britannia.