Now, at this point I’d seen enough that fewer and fewer shows offered really new experiences for me. Most of the shows I saw in 2010-11 stood out because they excelled at something that I’d already seen elsewhere. I also find it difficult to say much about some of these shows because they’re so recent that I can’t quite contextualise them yet. After reflecting on how to go about sharing my experience from these years, it occurred to me that the most significant event is probably a shift in how I watched anime. So here we go – how I watch anime in a modern fashion. 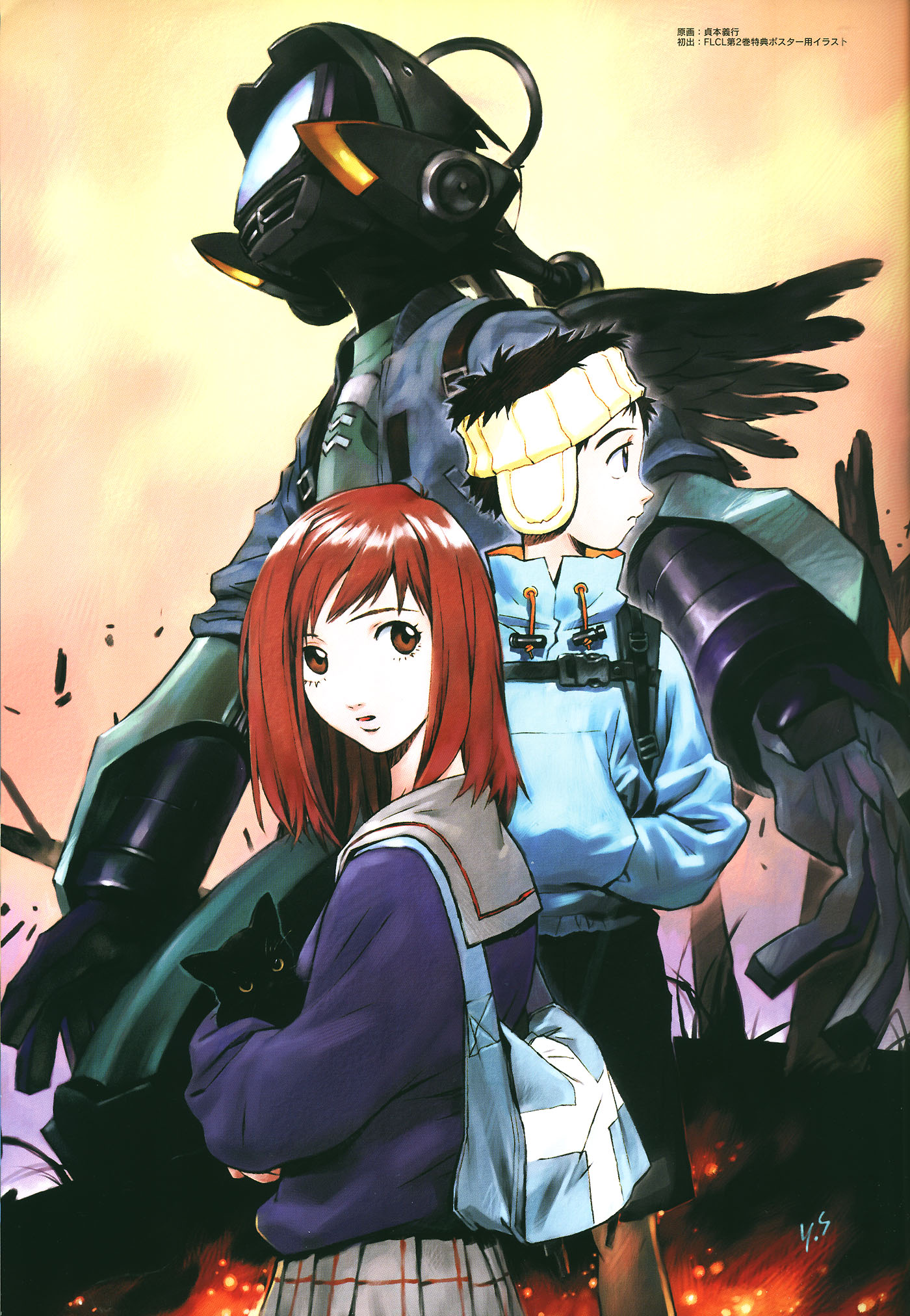 First, I started watching them in Japanese. Though I’d been watching almost all anime subtitled since serial experiments lain, the first show I watched raw was FLCL, which is one of the few shows I could watch raw. Not that I really understood it, two years of college Japanese doesn’t get you that far, but the show’s so visually distinct that it’s entertaining in any language. Gainax really pulled out every trick they had for this one, and based on the director’s commentary, their most common reason for using this or that style often boils down to “We thought it would look cool.” To give an idea of the strength of this show’s visual appeal, my little sister, who knows no Japanese besides a few words, was also able to watch most of the show with me and still be entertained (granted, she had seen it once before subtitled). I know of no other show that can do that.

FLCL, by the way, is also neck-and-neck with lain for the show I’ve seen most often, and is definitely the one I’ve seen in the most formats. I discovered it on Youtube in early 2010, then I got a bootleg DVD, then the legit (out of print) DVDs, then on glorious blu-ray.

Second, to expand the selection of DVDs available to me, I signed up to receive shows via post through Netflix. This was summertime 2010, so I was late to the party, but having access to legitimate copies of so many shows and films without having to buy them greatly increased how much I could watch. The first show I received was End of Evangelion, at a friend’s urging that I had to see that film to be able to really judge Eva. He’s right, though on first viewing I had no idea what to make of it. Same with the second viewing, actually, when I bought the DVD a while later. Sites like the EvaGeeks wiki help make sense out of the plot, but the animation and music are really the main attraction for me. Too bad the out-of-print Manga Video release sucks, man. Anamorphic widescreen with fuzzy video on a disc that looks two-sided but isn’t. It begs for a remastered release, but I’m unaware of any sign that this is coming.

Speaking of which, I also made the switch in 2010 to glorious blu-ray. Though I’ve only double-dipped for Gunslinger Girl and FLCL, both were well worth the upgrade. I also took an opportunity to re-watch Akira after several years late in 2011, and the improved video and audio, and perhaps a few extra years worth of other films to compare it with, turned it into a favourite of mine. Blu-ray has turned me into a bit of a video snob, though. I held off on buying Spice & Wolf until Funimation released it on blu-ray, and whenever a new film comes out, whether Summer Wars, Redline, or anything else, I will always go for the blu-ray, and never buy a show on DVD if it is, or might become, available on blu-ray.

I’ve also developed a writing impediment where I struggle mightily to write “blu-ray” without the word “glorious” in front of it.

In January 2011, I also had an opportunity to see some anime the old-fashioned way, in movie theatres. Besides the occasional Studio Ghibli film, not many anime get a theatrical release, so my sister and I made an hour-long drive to the only theatre in the area showing Evangelion 1.0 and 2.0. I’ve written about this before, so here I’ll just say that these two greatly benefit from the theatrical presentation, and this experience mostly erased the love/hate relationship I’ve always had with the franchise, and turned me into an Eva fan. The plot so far seems improved, for one thing, but the biggest difference has to be the spectacle of these films. 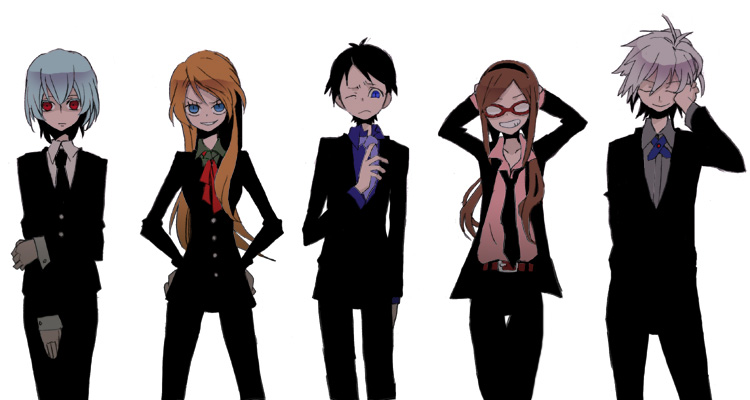 Around this same time, I also started watching anime the new-fashioned way, via online streaming. I started with Nico Nico’s English site, and the first show they had available was Uta no Prince-Sama. I mainly wanted to see what Nico’s site would be like, but only watched the first episode because much of the show’s appeal depends on the viewer wanting to watch a bunch of good-looking guys doing things and looking fabulous. It was okay, but the first show I watched fully streamed was The Mystic Archives of Dantalian. I talked about it here, but for both of these shows Nico’s peanut gallery made them more enjoyable.

Around the same time, I also started going to Crunchyroll, and subscribed in May 2011 so I could follow discussions with people who were watching the episodes as they came out. Crunchyroll also reinforced the lesson that Sturgeon’s Law applies to anime, as I’ve had mixed success finding new shows that I like enough to keep up with each season. However, they did bring me Chihayafuru, which by itself is enough to justify having it. Also being able to go back and watch Code Geass and Fist of the North Star are icing on the cake.

Finally, stepping back a bit, in late 2010 I decided I wanted to watch anime as it came out, which meant downloading fansubs regularly. The top pick for this happened to be Puella Magi Madoka Magica. Being able to interact with other fans and discuss this week-to-week was a novel and very rewarding experience, enough so to justify the forays into streaming mentioned above. I also loved the show enough to buy the limited edition sets Aniplex USA is releasing. At $75 each for three volumes, I did hesitate a bit but quickly decided to pre-order them. This was the most expensive show I’d ever bought by far, though it didn’t hold the title long – I ordered the LE for the first season of Fate/Zero for $370 mere weeks later.

Now, I’m still watching anime, and will doubtless continue to evolve as a fan, but with Madoka Magica, I feel like I’ve completed a full circle. I started with serial experiments lain, on a cheap bootleg DVD, several years after its original release, not knowing what to expect, not quite able to discern what I was seeing, but knowing it was something special. With Madoka Magica, I watched it as it came out, spent $225 on a special edition for it, and knowing that this, too, was something special, not out of a vague intuition but a more fully developed knowledge of what makes for good and bad animation.

I’ll go ahead and close this series here, now that we’re almost up to the “present day… present time…” I hope you enjoyed this outline of my experience with anime so far; I certainly enjoyed writing it, and look forward to many new experiences in the future.

1 thought on “Anime Autobiography – In the Modern Fashion”