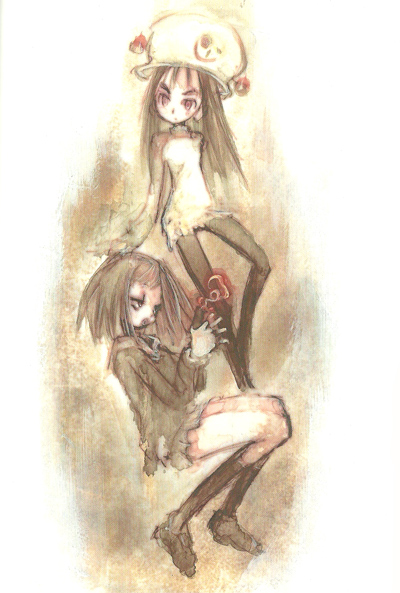 The most noticeable thing about Ueda’s adaptation is the art, which doesn’t quite resemble any other comic I own. Most of it seems to have been done with a pen in sharp, straight strokes. So, character outlines are unusually dark and, except for the faces, angular. Backgrounds don’t have much detail, which forces the reader’s focus exclusively onto the characters. Between that and the small panel sizes, the comic nearly induces feelings of claustrophobia, which isn’t necessarily a fault on the author’s part since some of the characters feel trapped in a town “where nothing interesting ever happens.” It doesn’t make for pleasant reading, though.

Besides being small, the panels have thick borders, occasionally drawn in the same jagged lines as the character outlines, so they really call attention to themselves. Ueda uses enough variety in panel layout, especially in the second half or so, to avoid visual monotony, and the small panels do maximise the impact of the full and two-page spreads. Though I generally prefer a more traditional layout of using the entire page in a composition, I can’t say that Ueda’s choice here doesn’t fit the story.

The FLCL anime has a reputation of being difficult to follow. Though I’ll admit the narrative is a bit messy, it’s not too difficult if one focuses on Naota and the coming-of-age aspect of the plot, and doesn’t worry too much about the science fiction aspects. The same holds true for Ueda’s version, but unfortunately that main point falls flat here. In the anime, every episode does contribute to effecting a change, albeit subtle, in Naota. Here, a bunch of stuff happens, but by the end it doesn’t feel like we’ve actually gone anywhere. Perhaps the comic’s simply too short, and there’s not enough time to adequately characterise everyone. Naota’s feelings for Haruko that he expresses at the story’s climax, for example, seems quite plausible in the anime, where we’ve seen the two spend a lot of time together. In the comic it feels abrupt, because they haven’t actually interacted very much, or at least not enough to engender the strong feelings we’re supposed to believe Naota’s developed.

Though the main plot’s a mess, Ueda does include several memorable scenes and individual moments. I especially like the time Naota spends with his friends, which are entertaining and reminiscent of how boys behave in the real world. His teacher’s pretty funny, and as in the anime Ninamori may be the most sympathetic character.

As for the volume itself, Dark Horse did a fine job, with about as nice paper and print quality as one can expect from a paperback. They revised, and generally improved, Tokyopop’s translation, and also included nine full-colour illustrations by Ueda that weren’t included in the old edition. They look great, except that three of them are printed on half a page, so they’re very small. There’s a short comic at the end, also by Ueda, called “The Fourth Studio.” The art looks like chalk on a blackboard, so like the rest of the book it’s unique, if nothing else, but I’m honestly not even sure what it’s supposed to be about. It also reads left-to-right, for some reason.

So, again, I found the book worth double-dipping for. It’s certainly not for everyone, but if you’re a fan of the anime or just want to read something unique, give it a shot.