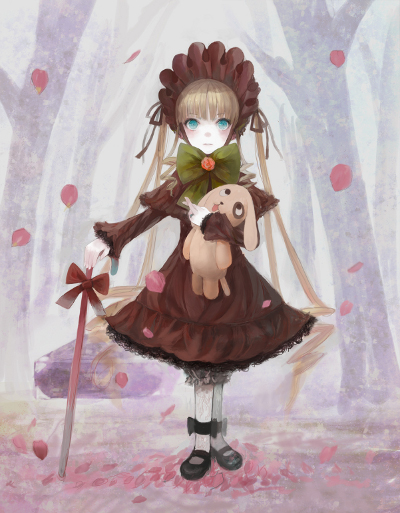 While I was still at university, I bought the second season of Rozen Maiden, based on the comic series by Peach-Pit, called Rozen Maiden Träumend. I liked the comic, and figured I would find the first season at some point. I did find that first season four years later, when Netflix finally got it back in stock, so I recently got to make use of my ancient purchase.

I’ll start with just a few words about the first season, because S1 was a simply mediocre affair. The premise is that a middle-school boy, Jun, who stopped going to school some time previous due to an unspecified traumatic incident, comes across a magic doll, Shinku. She’s one of seven “Rozen Maidens,” destined by their creator to battle each other in something called the “Alice Game” to become Alice. Over the course of the series we meet Shinku’s sisters, though most aren’t actually keen on fighting and are content to more or less goof off at Jun’s house. So, we have two parallel story lines, the Alice Game on one hand, and Jun’s internal conflict on the other. It’s an interesting setup, but unfortunately the first season falls short of the mark.

Part of the problem lies in the technical aspects of the show. The animation is workable, but nothing special; the art serviceable but not detailed or unique; the music fitting but not memorable, and so on. I do like how the writers adapted the story to fit what I sense was intended to last just one twelve-episode season. They made a lot of changes and streamlined the story, focusing on the dolls’ conflict with their youngest sister, Suigintoh, and Jun’s conflict with himself, and giving a fairly satisfying resolution for both at the end. Unfortunately, there’s also a lot of filler material, and the comical, if not slapstick, style of these episodes makes the more dramatic episodes more difficult to take seriously.

So, I began Träumend with modest expectations, but it ultimately surprised me. The art, music, and animation, though still not top-tier, improved noticeably; I’d guess that the second season’s budget was larger than the first’s. Träumend also has a leaner story, with much less filler, and feels like the perfect length at twelve episodes. Jun, now going back to school, is no longer the protagonist and plays a supporting role for Shinku, who spends most of the series trying to end the Alice Game as peacefully as possible. At this point, the plot diverges almost totally from the source material, and even answers a few questions left unresolved there, like the identity of the Demon of Laplace and the origin of the seventh and final Rozen Maiden. In fact, one of the best parts about Träumend is that it does offer a generally satisfying ending, whereas Peach-Pit, after having Jun overcome his own difficulties, ends it abruptly without offering any sort of resolution, or even a climax, for the Alice Game. The plot also offers a little more sophistication than the first season, adding some nuance to Suigintoh as a villain, and emphasising conflicting loyalties for the dolls between their creator and their sisters.

That said, Träumend‘s narrative does have some notable problems. For example, it brings back Suigintoh, because apparently now the real Alice Game has started so everyone needs to be there, which, Jun’s story aside, effectively nullifies the whole point of the first season. To make that a bit extra confusing, one of the dolls, Hina-Ichigo, shuts down a few episodes before the end because she had been defeated in battle in the first season; that makes some sense, but why wouldn’t that also apply to Suigintoh, who was defeated even more decisively?

While I don’t mind some ambiguity, Rozen Maiden has an awful lot of other unanswered questions. For example, we’re told at the end that there’s some other way to become Alice besides the Alice Game, but why did nobody know about this earlier? What is this alternative? What does it mean to “become Alice?” Who exactly is Rosen, and why did he make these dolls?

Despite all that, though, Träumend did save the series from mere mediocrity, and it may be the best expression of the Rozen Maiden concept. If not for the lackluster first season I’d recommend it wholeheartedly; even as it is, though, I’d still say to give it a shot if the concept interests you. If you’ve read the comic, you might be able to skip the first season, though it may be wise to at least read a plot summary first.