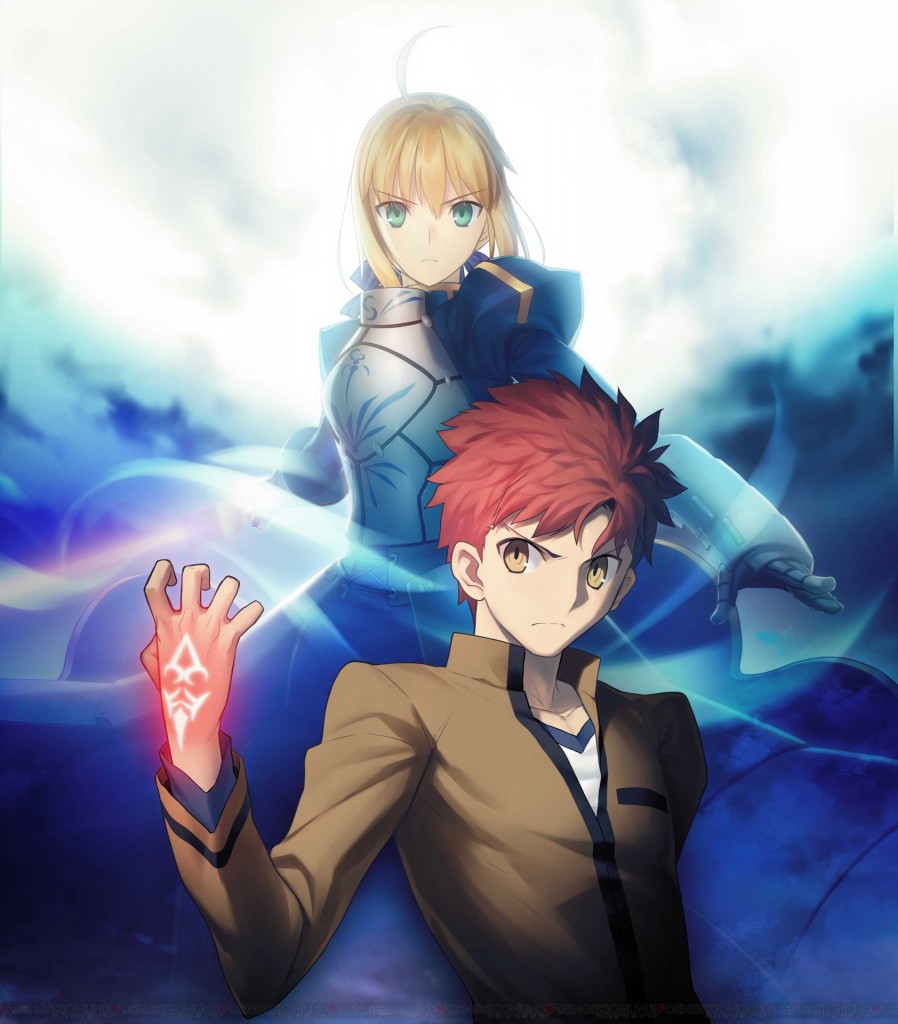 After finishing the excellent Fate/Zero anime adaptation, I decided to revisit Fate/Stay Night, the anime version, which I hadn’t seen in several years (before you visual novel people jump on me, I’m in the process of playing the VN and am a few hours into it). Though the show does have a few defenders, I’ve found that it’s much maligned by fans of the original. Though these critics often overstate their case, the show as a whole is a mediocre execution of a brilliant premise.

Starting on the technical side, the show was produced by the less-than-prestigious Studio Deen, and their work here comes out to merely competent. Most of the animation looks alright; the fights generally look decent, despite some still frames and pan-and-scan, especially in the climax. I have no complaints for the bulk of the show, but occasionally they try something odd. For example, they use split-screens several times, and at a couple points even tilt the frame sideways, as though someone dropped the camera on its side in a live-action film. Neither technique adds anything to the show, they just call attention to themselves and distract from the action.

Overall, though, it’s not too bad, except for one infamous scene about halfway through, when the heroine Saber has almost run out of mana, the magical energy she needs to fight, and needs the protagonist, Shirou, to restore it. Now, I’m not very far in the visual novel, but my understanding is that in the original VN this restoration involved a sex scene. Can’t show that on television, though, so instead Shirou, in a process that doesn’t make much sense and seems to contradict an earlier explanation of how mana can and can’t be restored, ventures into Saber’s subconscious and there encounters a hilariously awkward computer-generated dragon. It looks terrible, out-of-place, and deserves all the ridicule that gets heaped on it. When Saber wakes up, she blushes and looks embarrassed, and I don’t blame her; I’d feel humiliated if somebody saw that thing in my subconscious.

The character design generally looks good, with a few minor exceptions. Lancer’s blue jumpsuit and bad haircut aren’t especially appealing, and I wish Shirou wore something other than that baseball shirt; staying in his school uniform may have been preferable. While I’m nitpicking, does anyone know why a few characters, like Sakura and Kotomine, don’t have pupils, even though most characters do? It’s distracting and, honestly, a bit disturbing to me.

Anyway, the music, too, is merely competent. It does what it needs to do, though I struggle to remember any of it now. I will say that the opening credit sequence for the first half of the show is actually very good, which makes me wonder why they used this unlistenable mess for the second half of the show.

I find the premise of the Fate franchise fascinating. In order to attain the Holy Grail (well, not the Holy Grail, but a Holy Grail), which appears every few decades and can grant any wish, seven mages each summon a legendary hero and battle to determine who is worthy of this relic. The prospect of seeing seven great mages and the spirits of renowned warriors in a battle royale should be a solid foundation for a thrilling series, so long as the characters involved are engaging and credible.

So, who are our combatants in Fate/Stay Night?

Two incompetent teenagers, one barely competent teenager, a child who is competent but also a bit insane, one adult who’s a great martial artist but can’t use magic, one who gets killed before the story even starts, and finally, one competent adult.

Now, having the protagonist, Shirou, as an incompetent teenager isn’t a bad idea. He serves as our innocent abroad, and throwing a novice into the lion’s den can make for a lot of suspense. Having over half the cast so young and almost half barely even competent, though? That severely undermines any sense of gravity, and much of the danger comes not from knowing that there are six other master/servant teams just as skilled as the lead trying to kill him, but from the lead character just not knowing what the hell he’s doing. The danger’s still there, and so is some of the suspense, but watching a group of incompetent boobs bumbling around is more frustrating than thrilling.

So far, though, we still have a decent show. Despite my complaints about the characters’ competence, most of them are at least likable, and Saber is deserves her great popularity. The plot gets by well enough, largely on the strength of its premise, though many VN fans complain about deviations from the source material; I myself can’t say yet whether these deviations are for better or worse. There are some strange moments, like how Caster suddenly gets a couple flashback segments in her story arc that try to make her look sympathetic, even though she’d been portrayed for several episodes as a villain who’s ready and willing to kill an entire city, and had kidnapped and meant to kill one of Shirou’s closest friends, to accomplish her own goals.

However, the show’s greatest weakness is its own protagonist, Shirou. He fits a character archetype I call the “noble retard,” someone always determined to do the right thing, even when doing the right thing in that instance is suicidally stupid in the short-term and counterproductive in the long-term. As a novice mage who didn’t even know the Grail War existed until he got dragged into it, we can expect him to be in constant danger. Unfortunately, the constant danger comes from his insistence that he fight alongside, or even in place of, Saber, and repeatedly milling around town without her even though there are multiple legendarily powerful warriors determined to kill him. So, by my count he (almost) gets killed five times, three of which are his own damn fault.

Why does he do this? Well, because Saber is a woman, and it’s not right for women to fight.

Okay, I’m always one to applaud chivalry, but at some point you have to recognise that an incompetent nitwit has zero chance of surviving a fight with, for example, a mage with immense natural talent working with Hercules. This girl you’re with, though, hey, she’s a legendary heroine, so maybe she does stand a chance?

Besides, some of the servants and masters are also women, so it’d be more sporting to let Saber fight them anyway, if that’s how we’re going to approach this.

He doesn’t learn, either. Though he does call Saber for help in the second (but not first!) fight with Rider, even up to the last story arc Shirou still wanders around alone and gets himself captured.

Oh, and he takes her out for a date. Why not? There’s not any gravitas to this kid anyway, so let’s just keep things trivial.

Now, I should note that when I mentioned on Twitter that I’d be rewatching F/SN, a couple people told me to skip it and just play the visual novel, and I gather that many fans of the franchise would agree. I’m just a few hours into the VN, but already I can see why. With his first-person narration, Shirou is significantly more sympathetic, and comes across as slightly more competent, and one can understand more quickly and easily why he thinks the way he does.

So, ultimately, is the Fate/Stay Night anime worth watching? As I said, it’s not bad, despite some severe flaws, so if you’re interested in the premise or enjoyed Fate/Zero, it’s worth a shot. Just don’t expect a Fate/Zero-quality production.