I’m fairly, but not entirely, sure I saw Fantasia as a child; however, I have almost no recollection of it, so going into this film I had very little idea of what to expect. Having seen it now, it’s easily my favourite Disney film yet, which shouldn’t surprise those who’ve read my thoughts on animation in general because Fantasia is easily Disney’s most experimental work outside of Dumbo‘s pink elephants. Its seven shorts, each introduced by a live-action presenter with the whole film bookended by an orchestra setting up, are set to classical music and each intended to complement that music. They vary wildly in style, from abstract to fairly traditional. They also vary in how much they draw in one’s interest, and the film may have benefited from cutting out one or two.

The first piece, set to J.S. Bach’s famous “Toccata and Fugue in D Minor,” is totally abstract. It begins with a live-action orchestra and segues into various colours and patterns. I’d compare the piece to fireworks, which are pretty to look at, but only really impressive when experienced first-hand. This segment would likely captivate audiences in a theatre setting. At home, the music is more interesting than the film, like the visualisations in Windows media player. 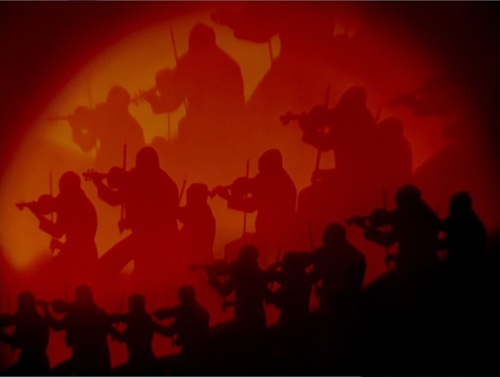 It’s pleasant, but too abstract to really hold one’s interest.

The second segment, set to selections from Tchaikovsky’s Nutcracker suite, interested me far more, with faeries, fish, plants, and Chinese mushrooms moving and dancing about in colours sometimes vibrant and lively, sometimes subdued, as the music required. It’s a pure animator’s showcase, and the care the Disney staff put into choreographing and making use of light and dark and transparency really shines through. Notice the details of the reflection of light off the dew, the textures on the plants and fish. It is, with one exception, my favourite section of the programme. 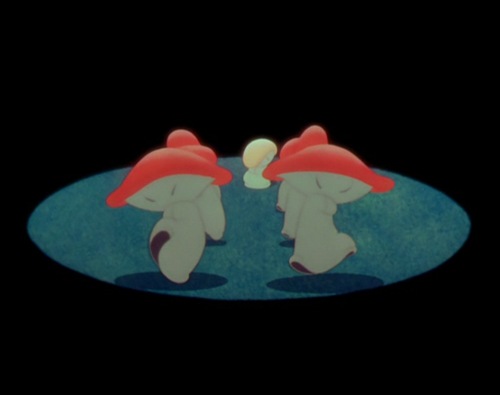 Yeah, Chinese mushrooms, because it’s set to the ‘Chinese Dance’. 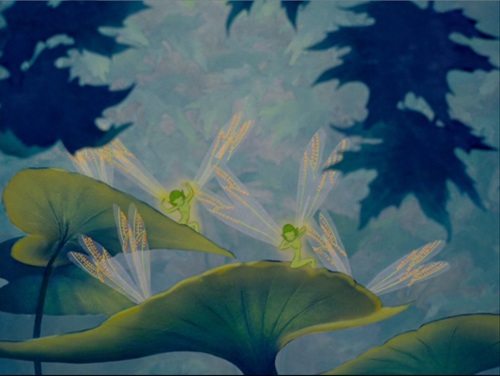 Lovely use of light and texture; also, yes, nudity in a Disney film.

Next is probably the most famous and iconic part of the film, with Mickey Mouse in the story of the sorcerer’s apprentice. I can hardly think of Mickey without thinking of that red cloak and pointed blue magician’s cap. It’s the most traditional segment, with a definite story, but it’s told almost without words, and though not nearly as lavish as some of the other parts of the film, the light humour is enough to keep it enjoyable.

The fourth segment, set to Stravinsky’s “Rite of Spring,” shows the creation and evolution of life from single-celled organisms through the extinction of the dinosaurs. There’s a good variety of setting here, with dramatically exploding volcanoes transitioning to the calmer underwater climate, lush forests, and finally a desert void. The animation is just as technically impressive as the Tchaikovsky segment, though the fight between the Tyrannosaur and Stegosaurus was somewhat awkward, partly because of the conspicuous absence of blood. I know it’s a family film, but there’s already three instances of nudity; a little blood wouldn’t have been out of line. The excellent use of light and texture is still there, though, and the extra drama and spectacle make it a fine companion piece to the Tchaikovsky sequence. 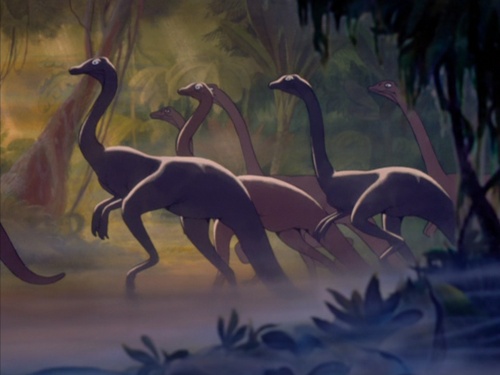 I have some complaints but really, it does have dinosaurs, and that’s all I ask of a film.

Here, the presenter announces a fifteen-minute intermission, and we see the orchestra begin exiting. I find it strange that a film would have an intermission, but honestly that’s not a bad idea for longer films. Luckily, the intermission only lasts a minute on the DVD, and when it comes back the presenter introduces “the soundtrack,” which turns out to be a line on the screen that vibrates and changes into different coloured patterns depending on what instrument plays. This lasts a couple minutes and, frankly, was rather pointless.

The first segment of the second half is set to Beethoven’s “Pastoral” symphony, and takes a mythological setting. We’re in a wood again, with centaurs, centaurettes, Pegasus, Bacchus, Zeus, and a handful of other mythological figures. “Pastoral” is just the word to describe most of it, too; we see winged horses learning to fly, satyrs playing, centaurettes bathing and spending time with the centaurs. Bacchus shows up on a donkey drunk off his ass, but the party’s interrupted by a (somewhat creepy-looking) Zeus tossing thunderbolts at them because… he’s just a jerk, I guess. He really looks like he enjoys ruining everyone else’s day.

This segment is bright and colourful, with a lot of primary colours. There’s less texture and less use of lighting than the Tchaikovsky and Stravinsky segments, though. Even the centaurs are multi-coloured, which looks a little strange, but the whole atmosphere gives the feeling of having a good time, until Zeus comes up and only he and Vulcan, who makes the thunderbolts, are having a good time. 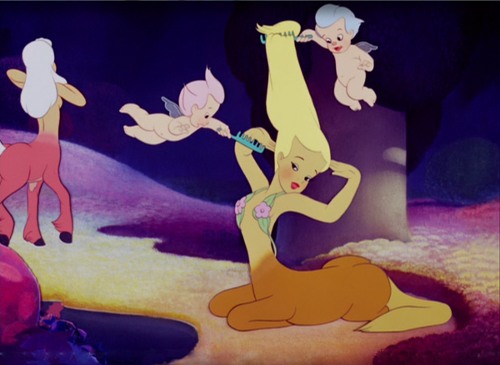 I’ll admit I find the technicolor centaurettes fairly attractive; I’m pretty sure it’s because of the human part. 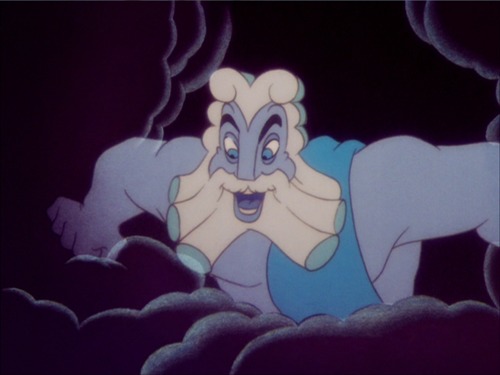 Zeus will gladly make you pay for not inviting him to your party.

Next is Ponchielli’s “Dance of the Hours,” which the presenter tells us is one of the great ballet compositions, so of course it begins with dancing ostriches, followed by hippos, elephants, and alligators – or are they crocodiles? Anyway, it’s the most cartoony segment, obviously geared towards children, but if you find animals dancing awkwardly funny you might enjoy it. Otherwise, this segment could have been cut out with no loss to the film as a whole. I do have to correct my post on Dumbo, though. I said there that there was nothing like the pink elephants anywhere else in Disney, but here we do have dancing elephants, about a year before Dumbo.

The best segment is saved for last. Set first to Mussorgsky’s Night on Bald Mountain, it begins with the devil, looking appropriately sinister, like a gargoyle, summoning a group of demons and ghosts. The demons are grotesque, especially by their strange dancing movements, and reminiscent of medieval and Renaissance art, and the ghosts are similarly terrifying. These ghosts are noticeably static and just float across the screen, but their design mostly makes up for that. 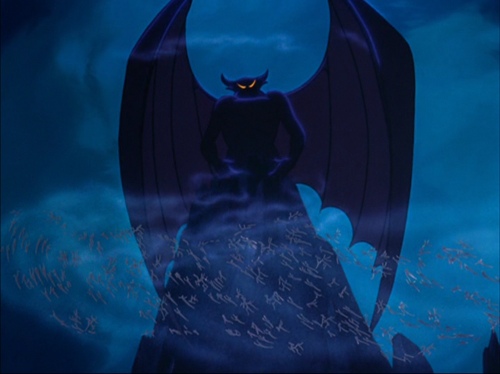 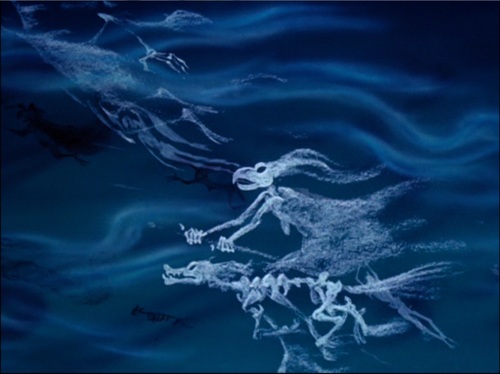 The ghosts also look suitably, well, ghastly, but are more impressive in still frames than in motion.

After a few minutes, we hear a bell, at which sound the devil retreats and the ghosts return to their graves. The second half of this segment is set to Schubert’s Ave Maria, and features a procession of people carrying lanterns off in the distance in a forest, on their way to a chapel. It’s short and simple, but the sedate atmosphere of this segment is especially effective immediately after the Bald Mountain sequence. 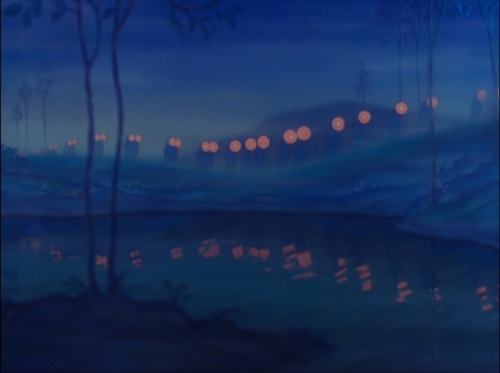 Ending on a peaceful note.

So, overall, Fantasia may be overlong, but overall it’s an excellent set of animation. I believe there were originally plans to make this a series, and I can’t help but feel that these plans falling through was a great loss to American animation.