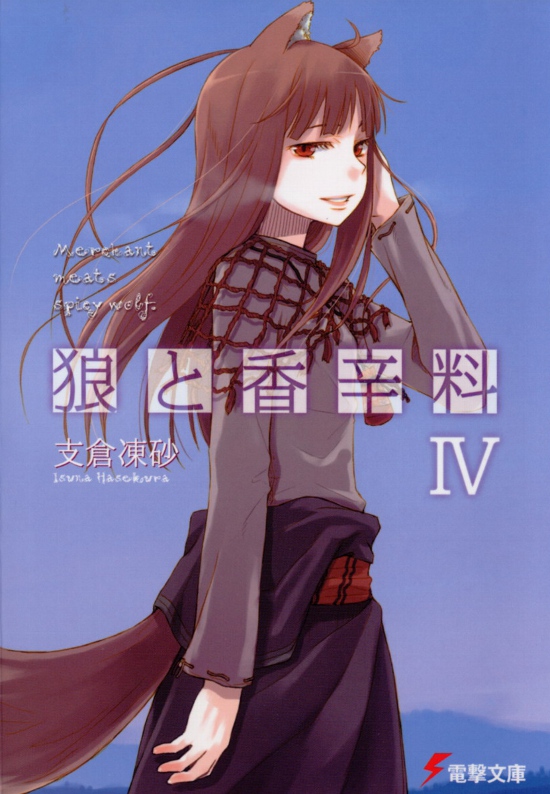 Spice & Wolf is a series that I’ve wanted to write about for a long time, but I’ve struggled with actually putting pen to paper for it. It’s like the Haruhi series in that it’s charming and competently written, but lacks the subtlety and complexity that make for a great, re-readable novel series.

Spice & Wolf’s basic premise is that Lawrence, a traveling merchant in a world loosely based on late Medieval or Renaissance Europe, meets Holo, a wolf-spirit and harvest goddess in a village he does business in, and agrees to help her return to her homeland of Yoitsu, far in the north. The overall plot is a promising one, but author Hasekura Isuna has also set up a potentially major story-writing problem, because one of our protagonists is an almost literal deus ex machina.

Luckily, Hasekura mostly avoids resolving problems with brute force, partly by focusing most story arcs on either Lawrence or side characters. Since Lawrence is a merchant, much of the books revolve around his business dealings, things like currency speculation or commodity bubbles. This setup gives the books some novelty value, and Economics or Business majors should be all over this series. Even if that doesn’t sound so appealing, the overarching conflicts of Lawrence’s relationship with Holo and her desire to return home never fall too far out of focus.

There is enough complexity to each story arc to hold the reader’s interest, but unfortunately there’s a total lack of subtlety. Hasekura seems to feel it necessary to explain everything, not just the economic concepts that may need it, like currency devaluation or buying on credit, but also plot points, character relationships, and implications that an intelligent reader could figure out on his own. As a small example, in the fourth book a character says of a tavern that “I doubt you’ll find its equal even in Endima.”

Now, it’s not too hard to figure out from the context what he means, but Hasekura notes that Endima is the capital city of the kingdom of Ploania, and very large. That’s fine, it gives the reader a little context, but he then adds, “Saying something couldn’t be found even in Endima was a common way to extol the virtues of the smaller towns and villages of Ploania.”

Now, I know Spice & Wolf is supposed to be relatively light reading, but spelling out every thing isn’t “light,” it’s insulting the reader’s intelligence.

Whenever people discuss Spice & Wolf, they often point to Holo herself, and especially her dialogues with Lawrence, as the series’ highlight. I agree, and a large part of what keeps me reading is wanting to know what becomes of these two. Though each novel has its own sub-plots, the overarching conflicts that keep the whole thing interesting are Lawrence’s desires to keep on with his business so he can fulfill his dream of opening his own shop, against wanting to help Holo find Yoitsu, and wanting to keep traveling with Holo. For Holo, she clearly wants to keep traveling with Lawrence, and it’s not clear what she plans to do when she gets to Yoitsu; Hasekura makes this more interesting by introducing the possibility that Yoitsu may not even exist anymore, as stories exist that it, and many other towns, were destroyed by something called the “moon-hunting bear.” All this makes for an interesting dynamic, albeit one that’s often just below the surface (or would be just below the surface if, again, Hasekura didn’t constantly explain everything).

Hasekura also does a moderate amount of world-building. I can’t tell for certain how thoroughly he’s mapped out the geography and history of the world of Spice & Wolf, but he gives the reader just enough information to make it feel like a real place. My guess, though, is that there’s not much more in the way of history or language than what Hasekura reveals in the novel itself, so anyone looking for a fully-developed world along the lines of, say, Tolkien’s Middle-Earth will be disappointed.

One aspect of the setting I find especially interesting is the tension between the Church, based on the Catholic Church, and the remnants of paganism. I find this fascinating in itself, though Hasekura doesn’t tell us much more about it than is needed for the plot, but it also adds an occasional element of suspense, since Lawrence is traveling with someone who just happens to be a pagan goddess (essentially, at least, though Holo dislikes anyone referring to her as such), and her discovery would be disastrous for him.

Overall, I’d give the series (as of the fourth volume) a weak recommendation. If the premise piques your interest, or if you already like the anime or comic adaptations, it’s worth picking up, but certainly isn’t a must-read.