A little more difficult are those disappointing series that start off strong. Very soon after I first started following anime and comics, I came across recommendations for KareKano. Most of the enthusiasm was for the anime adaptation, but a couple years ago roughly I came across the first volume of Tsuda Masami’s original comic and decided to check it out. I didn’t care much for the art, but the characters and humour drew me in and gave me high hopes for the rest of the series. As it happened, a local Half Price Books had a bunch of volumes available, so I bought a bunch of them – up through the ninth.

That turned out to be a big mistake, because within a couple more volumes I’d completely lost interest. What makes KareKano unusual and potentially interesting is that where in most romances or romantic comedies the two main characters don’t start going out until the end, here the main couple gets together at the end of the first volume. Unfortunately, after that Tsuda didn’t really have anywhere to go; if I recall correctly, she’d originally intended the series to consist of short stories lasting a few chapters each, but the first arc was far more popular than the second, so she changed course and went back to the first set of characters, so my guess (it’s been a while, and I don’t quite recall what exactly bothered me about these volumes) is that there wasn’t much of a plan for what to do with these characters. It also doesn’t help that the comic relief also disappeared (there were still jokes, but they weren’t funny). I tried, and made it through volume seven hoping that it would improve, but ultimately couldn’t bring myself to finish even all the volumes that I’d bought – especially after learning that it lasts for twenty-one volumes total. 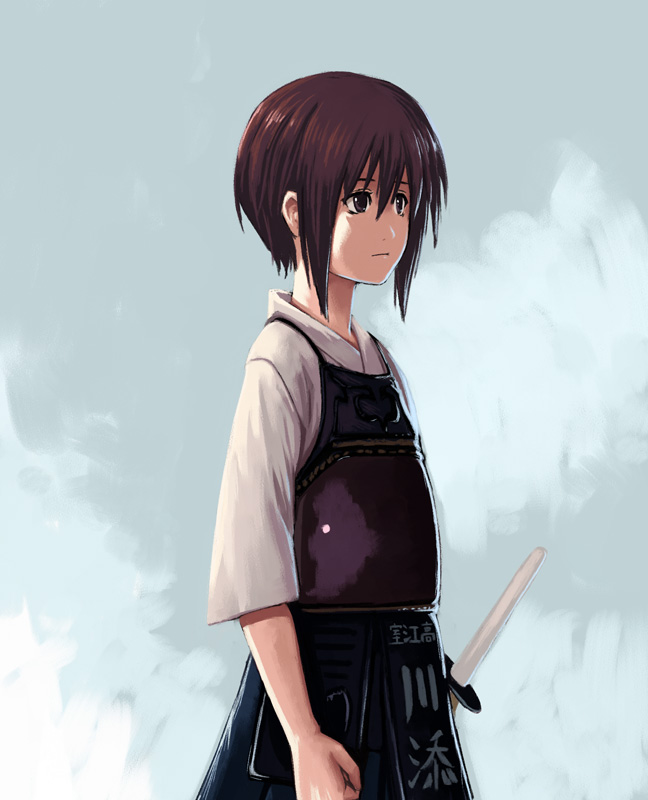 At least in that case I saw the quality drop early on and could cut my losses. With Bamboo Blade, however, it was more gradual. The first few volumes were fairly good; then, the writer, Totsuka Masahiro, started going off on tangents. Theoretically, the series is about a high school kendo team, with a focus on the girls’ team and their coach. Totsuka, however, started devoting chapters to another school’s team, and then another set of characters, and so on – everyone and everything except the characters introduced at the beginning! All these side stories should have been their own series; the reader of this series has no reason to care about them. The quality never totally plummets, though, and Igurashi Aguri’s art is fine throughout, so I stuck with it for twelve volumes. Then, when I sat down to read the thirteenth, I just could not bring myself to do it. At this point, there’s only one more volume in the series; I should just finish it, but at this point I just can’t take it anymore.

Sometimes, I like a series but ultimately drop it not because of a drop in quality, but because of extraneous factors. Most often, this happens when a series has gone out of print, especially if it’s a long one, and the remaining volumes are difficult to find or simply cost more than I’m willing to spend. For me, Welcome to the NHK, Ranma 1/2, and Battle Angel Alita: Last Order are examples of this. Most of the remaining volumes can still be found, but I’m not paying $20 or more for single volumes of, say, Ranma 1/2, especially when I still have at least a dozen volumes to go.

The worst cases, though, are when I don’t drop a series, but its publisher does. My example for this was going to be School Rumble, which Del Rey seems to have given up on as of volume sixteen, but I recently heard that JManga will pick it up. Not that JManga does me much good, since I don’t have an account with them, but maybe this will change that. I have given up, though, on Moyashimon. Del Rey published the first two volumes, but it’s been over two years now since the second volume came out. Now, I fear that Sayonara, Zetsubou-Sensei has been similarly dropped as of volume fourteen. In that case, perhaps I should count my blessings that any of it was brought out here in North America; the anime sure hasn’t, and I don’t hope for it.