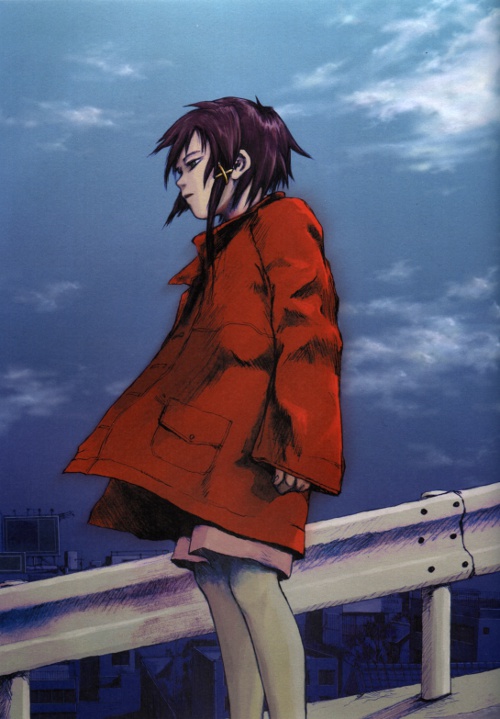 As I mentioned in the second Anime Autobiography post, serial experiments lain is, by far, my favourite anime, and the show that really made me into an anime fan. So, when Funimation finally, two years after licensing it, released it on glorious blu-ray I felt obligated to pre-order it.

Now, I’ll focus on this specific release rather than the series itself for this post, but I will say that what I love about lain is the show’s ambition. Writer Konaka Chiaki and his co-creators really packed a lot of ideas into this show, and the result is a series dense with information. There’s a good deal of exposition and a few infodumps, and though the generally slow pacing keeps this from getting totally out of hand, it is fair to use one of the episode titles, “infornography,” to describe this show’s approach to storytelling. If you want to know a little more about the show itself, I’d recommend reading Lawrence Eng’s short review (his site, “thought experiments lain,” is also a great resource for information on the show’s many allusions and plot points).

Unfortunately, lain had more ideas than budget. Though the aesthetic of the show is great, and still frames are often very attractive, much of the animation isn’t very animated. Even a few of the more static shots lack detail, so the end result varies wildly from unique, even fascinating, imagery, to shots that simply look awkward.

So, there’s only so much those restoring the film for the blu-ray could do to sharpen it up for high definition. The audio and video are better than the old Pioneer DVDs, enough so that I would say that this is the version of the show to own, but some of the film was apparently poorly preserved and thus a bit fuzzy-looking here, and even the well-preserved scenes had an upper limit for how much they could improve.

As far as I can tell, the translation is the same as the old edition; they even continue to refer to Alice as “Arisu” in the subtitles. There is one audio error in the fourth episode, when a little girl catches a boy in (what she thinks is) a game of tag and says “gotcha,” in plain English, and in a totally different voice than how she sounds later. Apparently, Funimation mixed up the English and Japanese audio tracks. This only happens this one brief moment, but I’m surprised to see it happen at all.

Funimation did try to make this new set more appealing by including some bonus items. The set does include the show on both DVD and blu-ray. The only extras on the discs, though, are clean versions of the opening and closing animations, and the original and US trailers for the show.

Also included is a booklet including some art by ABe Yoshitoshi, character designer and co-creator of the show, which most lain fans will probably have already seen and can find better versions of in the art book An Omnipresence in the Wired (released in the US as lain illustrations), but I suppose it’s nice to include them here. Also, there’s some commentary by Ueda and Saito, about a page per episode, about the restoration process. Much of it is fairly technical, but Ueda’s joking around keeps it from getting too dry.

By the way, if you’re wondering who Ueda and Saito are, the booklet doesn’t say. Ueda would be producer Ueda Yasuyuki; I don’t know but gather that Saito headed the restoration project and, based on the credits in ANN’s encyclopedia, was an editing assistant for the original show.

There’s also a fairly long art book which is not what I’d normally call an “art book” (like Omnipresence), but which contains production materials like character sketches, height comparisons, and room layouts. I’m not sure how much this would interest people who aren’t fans (as opposed to more casual viewers) of the show.

Oh, and they included a sticker, which I guess some people might find cool?

As a final verdict, I’d say this set is worth getting if you either don’t already own the Pioneer DVD’s or are a fan of the series and want to have the best version possible. If you’re only a casual fan, though, and already have the old version, it’s really a coin toss on whether this set is worth the upgrade or not. It is, again, the best version of the show out there and thus gets my recommendation.