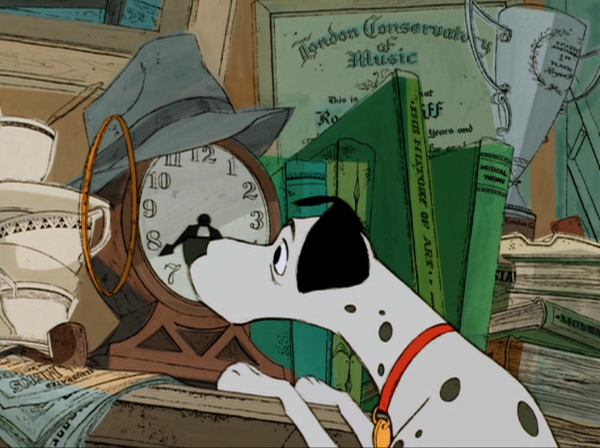 The colours in the background objects stray outside the lines, like a child’s watercolours. Also, though this is easier to notice in motion than still images, the character outlines are often scratchy-looking, rather than solid, and sometimes look like draft lines fading in and out. It’s a less polished aesthetic, and makes the film as a whole more visually interesting than most previous works.

I appreciate that the soundtrack incorporates some jazz music.

I don’t really care about any of the protagonists much, though the Colonel and cat (Sergeant, I think) are fairly entertaining. We do get a decent set of villains. Horace and Jasper are largely comic relief, but aren’t totally incompetent and are mean enough to be threatening. Cruella de Vil is another piece of Disney environmentalism, continues the tradition of obvious villain names, and seems to be one of the studio’s more famous antagonists. She is a better villain than most, alternately manic and scheming, and always a perfect snob.

This is another film where it’s best not to think too deeply about the plot. Does so little happen in London that a dognapping is front-page news? Why did Cruella need these particular puppies so badly? She’d already bought eighty-four others from pet shops. Were Roger and Anita really planning on keeping seventeen dogs in their little house? At the end they plan on moving to the country, but even then, keeping 101 dogs seems like a bit much.

All that said, it’s mid-pack among my ranking of Disney films.

Uncle Walt-a-thon: Sword in the Stone –>