I’ve written before about my attempts, some more successful than others, at reading Japanese comics in the original Japanese. Since this strategy has worked fairly well at learning that language, last month I decided to order some comics in French. Since I don’t know many French comic artists, I figured I’d import the first four volumes of Pika Edition’s printing of Suetsugu Yuki’s Chihayafuru, which doesn’t look like it’ll receive an English-language release anytime soon. 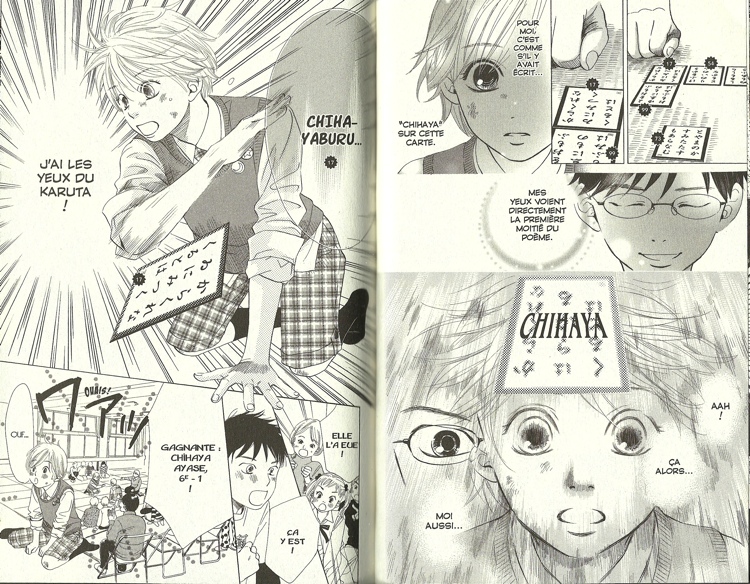 Chihayafuru‘s main strength lies in its characters, who have great chemistry and complement each other very well. Chihaya is the main character, and the story’s focal point is her love of the card game karuta, which she gains after befriending Arata, a classmate who’d recently transferred into her school. I like them both, but of the main characters the third, Taichi, is who I find most interesting. He’s intelligent, good-looking, and talented at almost everything he tries, which of course makes him very popular and a great contrast to the nerdier, outcast Arata. Arata, though, is better than Taichi at  one thing – karuta, and that one thing happens to become the passion of Chihaya, the one girl who doesn’t seem to admire Taichi. The characters are just twelve at this point in the story (there’s a time skip to high school a little later), but this bit of jealousy forms the basis of a good old-fashioned love triangle later on.

The art often has a charm to it in lighter moments, but Suetsugu also successfully conveys the intensity of the actual karuta matches. Every page feels very busy; panels often overlap, have slanted edges, artwork will exit panel borders, and rarely use a basic layout.

Now, when I got these volumes, the first thing I noticed was that Pika Edition’s release is more elaborate than what I’m used to from American publishers. The paper and print quality was nice, and they included a dust jacket like Japanese publishers do, which I appreciate, but they also included a couple of extras. First, a booklet of the Hyakunin Isshu, the poetry collection that karuta uses, in transliteration to Roman characters and in French translation. I’d have preferred them in Japanese characters with translation, but I certainly can’t blame them for transliterating instead.

Second, they included some punch-out karuta cards in the back, eight in each volume, with the text in both Japanese characters (hiragana) and Roman. I have a feeling it’ll be tough rounding up any friends to play with, but at least I have the option. These extras do make me wonder how elaborate the original Japanese release was; did Pika decide to do all this on their own, or were they duplicating the original edition?

How to deal with the poetry used in the game presents something of a problem for any localisation, and there’s not really a good solution. As noted in the book’s introduction, the game is based on the sound of the words, not the sense; so, the poems are left untranslated. However, each time a poem is read, that speech bubble has a star with a number that’s keyed to the booklet that came with the comic, so the reader can look up the poem if he wants. Unfortunately, these keys are a little distracting.

Chihayafuru somehow feels right in French, though I can’t quite place why that would be. Maybe it’s just a subconscious association on my part, equating both the language and the poetry-based karuta to refinement. On a personal note, I was also pleasantly surprised at how quickly I was able to read through the first volume, compared to my experiences with Japanese. Obviously French is supposed to be easier for a native English-speaker to learn, but I’ve been spending more time studying Japanese. Also, a couple of weeks ago I took a shot at reading Madame Bovary, and that was a… humbling experience.

In any case, I’m thrilled to own Chihayafuru. I love the characters and the story because of the anime, and can’t wait to see where the story goes form where the adaptation left off, but a large part of the comic’s appeal is that it warms my heart to know that there exists a game centred around memorising poetry like this. When Chihaya begins trying to memorise the hundred poems, her coach, Doctor Harada (er, Docteur Harada), tells her to think of it as meeting a hundred new friends. My experience reflects that analogy; the difference between how well one knows a poem one has memorised compared to a poem one has merely read once or twice is like the difference between a friend and a simple acquaintance in familiarity and fondness.

So, if you can get your hands on the comic in a language you can read, please do, and while you’re at it, try making some new friends of your own and memorise a sonnet or two. Trust me, it’ll be worth the effort.