A Decade’s Worth of Serial Experiments 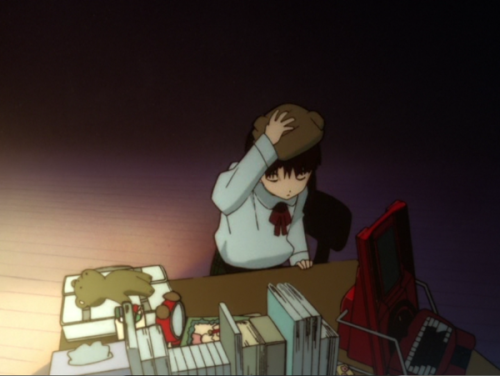 This post was written with my bear cap on.

Similar for Spirited Away, which I saw in theatre. Thanks to the DVD special features I even learned who Miyazaki Hayao is, and though I had a mild interest in seeing more of his work, and perhaps anime in general, I didn’t pursue that until a couple years later, in Spring 2004, when I stumbled into the manga aisle of a bookstore. That interest in Japanese comics prompted a greater interest in its animated cousin. I’m not sure how I first heard about lain specifically; probably through the forums for the webcomic Megatokyo. I didn’t know much about it going in, either, except that it was vaguely cyberpunk-ish, but then as now I don’t require much more than a few interesting screencaps and a strong recommendation to pique my interest. 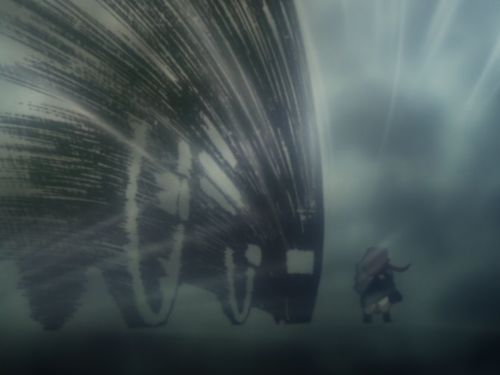 A dream? A hallucination? An intrusion from the Wired?

So, once I had the financial means to purchase a relatively expensive DVD set, I sprung for it. Nobody else in the family was interested, of course, so I was banished from the living room and had to hook up our only DVD player to the television in my parents’ bedroom (my own ancient TV didn’t have the proper connections). My little sister did begin watching it with me, but she was very young and the suicide in the first scene scared her off, which is just as well because that allowed me to watch it subtitled, like a civilised cartoon fan (and to this day, I’ve never heard the show’s English dub).

Though I plowed through all thirteen episodes in just two sittings and enjoyed it a good deal, I wouldn’t say I was especially excited about it at first. Instead, the series grew on me more gradually. For most of my life, I’ve had a long queue of things to watch or read (or play, back in high school), and yet, despite all of those other books, games, and DVDs, I found myself constantly returning to lain. I’d spend my limited time online browsing lain fansites, looking for fanart, creator interviews, theories, and the like, which I’ve done for very few things before or since. 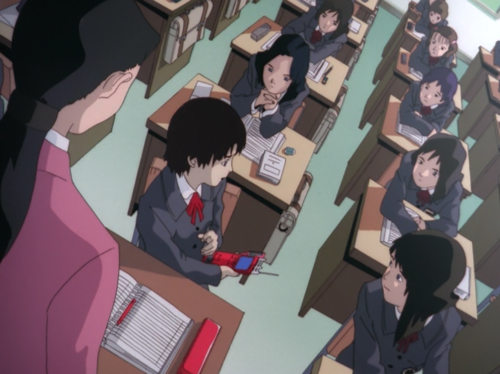 lain reminds you to use your social media responsibly.

That, and I kept rewatching it. I saw it a few times in just the first several months after buying it, and I’ve watched it once almost every year since. I seldom revisit movies or TV shows, but lain offered something new with every viewing. In fact, with the additional years of experiences and time spent thinking about both art in general and anime in particular, I find lain a more rewarding experience now than when it was new. A few works prior to lain had invited me to think deeply about them; for example, at the time I was a fan of Pink Floyd’s The Wall. However, while that album is ambitious and complex for a rock album, that qualifier is an important one. Once I “got” The Wall, I got it, and it’s been years since I’ve noticed anything new about it, whereas I’ve only recently felt like I might understand lain‘s climax and resolution. So, lain was the first to both encourage and withstand sustained attention, and though I wouldn’t claim that lain is on par with these works, the only other things in any medium to hold up to this much analysis from me have been classics like T.S. Eliot’s poetry, which I discovered shortly after lain.

What fascinated me so much about the show? Partly it was the cyberpunk-ish aesthetic mentioned earlier, which was new to me, as well as the theme of man and his relationship to technology, as I had taken an interest in computers and the internet was still just new enough to be exciting. lain anticipated the popularity of smartphones by a few years, and offered an early portrayal of internet culture, the mass of often-unreliable information and rumours, what we’d now call doxing, and so on. The premise of the internet, or “the Wired” in lain‘s terminology, influencing the real world in a physical way, or of someone existing on the Wired without a physical body, may sit firmly in the realm of science fiction, but the omnipresence of the Wired does resemble, in a way, modern persistent connections to social media or augmented reality applications. 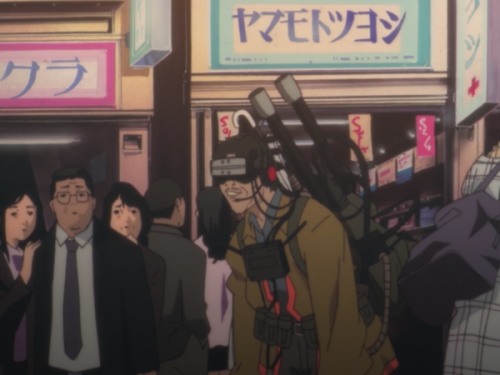 Other characters have more efficient mobile PCs, but I like this guy’s style.

The most lasting appeal, though, is lain‘s style of storytelling, which wasn’t like anything I’d seen before and isn’t like much of anything I’ve seen since. If I may paint with a brush the width of Australia, Japanese storytelling in general tends to be slower-paced and heavier on atmosphere than American fiction, and this generalisation certainly holds true for lain. There are scenes early on, like Lain’s vision of a girl stepping in front of a train or the shadowy figures wandering her school’s hallways, that don’t add anything to the plot but do present a sense of otherworldliness.

“Slow-paced” doesn’t mean that not much happens, though. In fact, I’d describe the show’s overall aesthetic with the eleventh episode’s title, “infornography.” Besides plot events, the audience gets a lot of expository dialogue and infodumps complete with additional text in the background. Unfortunately for the fan theorists, much of this information isn’t reliable – no character knows everything, some are mistaken, some dishonest, and sometimes they do some speculation of their own. Some events seem to be presented from a highly subjective point-of-view, and others may well be red herrings. lain revels in its flood of data, and though deliberate obscurity and obfuscation is often the mark of a writer faking a high level of sophistication, lain practically builds the entire show around this, and does so to great effect. 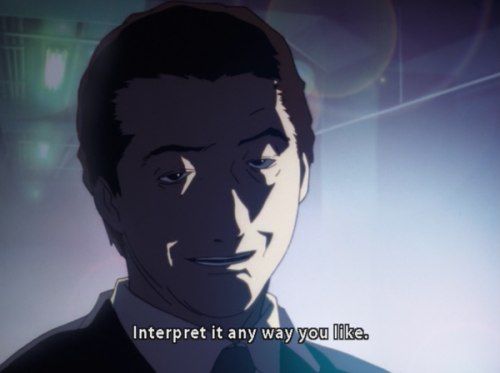 A message, or challenge, to the fan theorists.

Of course, some people do find lain unappealing for these same reasons, and understandably question whether the show actually does have anything to say at all. While I do believe there is a “there” there, I’ll admit it’s not a show for everyone, and even I sometimes think it may have a red herring too many, and it does have some other problems. It was obviously not a high-budget production; the animation isn’t very fluid, and characters sometimes go off-model. It also has a couple silly moments, like the tubes (for coolant?) coming out the side of Lain’s house.

Despite a handful of legitimate criticisms, though, it’s remained my favourite anime and one of my favourite works of fiction overall for a full decade now, and it’s the only work I feel emotionally invested in. When someone criticises any other show, book, or anything else I like, I may defend it, but don’t feel compelled to do so as I do with lain. So, after a full decade of serial experiments in the arts, I love lain as much as I ever have. If you haven’t seen it yet, give it a shot. It’s easy to find, either on DVD or Funimation’s blu-ray release (which I’ve reviewed previously), and I can almost guarantee that you’ve never seen anything quite like it. 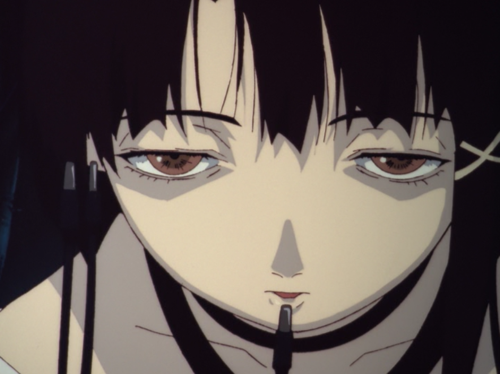 The burden of the Wired.