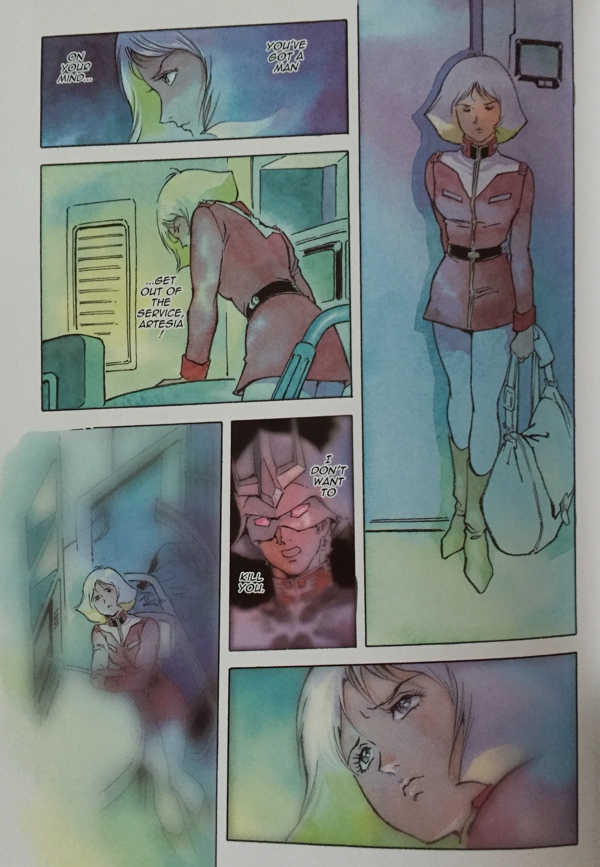 I never thought I’d come up with a title more unwieldy than Rex Quondum Rexque Futurus: Kingship in Fate/Zero, but thanks to Yasuhiko Yoshikazu, I’ve outright crushed the previous record-holder. I’ve also changed the naming scheme of this series to make it less monotonous-looking, since this is obviously going to take up the vast majority of posts I write this year.

Anyway, my only previous experience with the Gundam franchise is the movie trilogy version of the original series and Char’s Counterattack. I watched those in particular because Daryl Surat, co-host of the Anime World Order podcast, recommended those four films as the quickest introduction to the franchise. I’m not a huge fan, but I liked them a fair bit; I’m also aware of Yasuhiko’s reputation and I’m a sucker for nice physical editions of books, and Vertical’s edition is gorgeous, so I went ahead and jumped for his Mobile Suit Gundam: The Origin, which adapts the original TV series.

Of the films, I found the first to be the most engrossing. The story begins with an attack on a mostly civilian space colony, with many of the refugees being essentially forced into military service to man the vessel carrying them to safety. This desperate situation, along with the inevitable conflicts between the professional soldiers and the mostly young civilians forced by circumstance to fight with them, meant that the plot’s most intense moments came early on.

Going through the fourth volume, Yasuhiko’s version began suffering the same problem, and I’ll be interested to see how the story develops going forward. The fifth volume, though, covers the backstory of two of the main characters, Char and Sayla, which I don’t remember from the films, and it’s probably the most engrossing volume yet. We get to see a great deal that the rest of the series only hinted at, along with some political intrigue leading up to the war covered by the main plotline.

Yasuhiko’s artwork is excellent, and I especially appreciate his use of colour to really bring out the most dramatic moments of each chapter (most of the books are black-and-white). These pages have a very soft feel to them, and he typically has a very dominant colour on each. There are also a few pages that are more subjective in point-of-view than I’ve seen previously in Gundam, which is interesting (normally, I’d say tongue-in-cheek that “they’re having an Evangelion moment,” but I don’t want to hack off the Gundam people).

Next up is How to Read a Book, because that seems like a good thing to know.