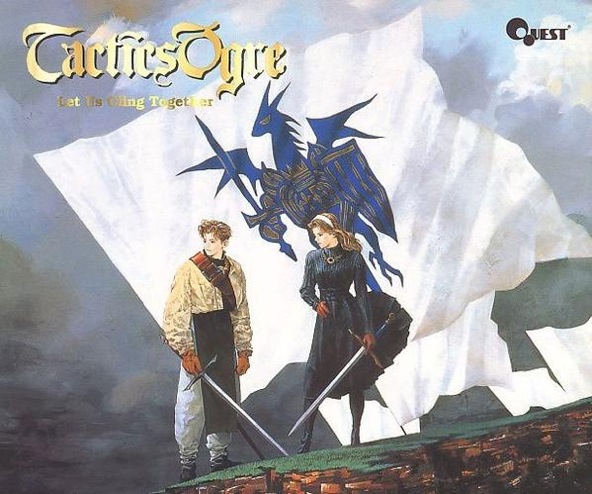 Nonetheless, once the game got going and I could start customising my army, the game did start to feel more fun. The basic gameplay itself is relatively simple and easy to get into, but has enough depth to it to stay interesting. Similarly, there are a lot of different classes and types of equipment and such one can assign to the characters, enough to make a lot of different strategies possible without having so many options that it gets overwhelming. Some classes are better than others, but overall it’s fairly balanced and it’s rewarding to experiment with different classes and strategies.

One thing I loved about the original Ogre Battle is the aesthetic; that carries over only somewhat to Tactics Ogre. While the box art (especially in the Japanese version above), character portraits, and a few other things use a similar style, the characters as they actually appear on the maps are small and a little cartoony-looking. Admittedly, this is largely because the gameplay makes larger character sprites like in Ogre Battle impractical, and this game’s style was fairly common on the Super NES, but it’s still a less visually appealing game than its predecessor.

Tactics Ogre also borrows, but greatly simplifies, Ogre Battle‘s character alignment system. This used a lawful/chaotic axis similar to Dungeons and Dragons, and in the original would change based on a character’s actions. This determined the course of the story, which special characters the player could recruit, and which classes a character could become. TO is similar, but a character’s alignment is static throughout the game, and the player character’s alignment is determined entirely by decisions made at a few junction points in the story. It also gets rid of OB‘s reputation meter entirely. I have mixed feelings about the simplifications; alignment and reputation could be annoying, but they did give the player more options in customising his army and changing the course of the story. I don’t really miss the reputation meter, perhaps because Ogre Battle 64‘s hidden meter royally screwed me over a couple times, but some allowance for changing alignment for regular characters would’ve been nice.

Both Ogre Battle games had a few side quests the player could go on, and this one does, too, but unfortunately they’re almost all available only in the last quarter of the game. The largest by far is the Hell Gate stage, essentially a hundred-battle marathon, though mercifully one is allowed to save during battles (though I hear that this was not the case on the original Super Famicom version!). I got thirty-six battles in before giving up due to diminishing returns and general boredom, because about three-quarters of the maps use the same layout, which is just a flat, square room with a slightly raised platform in the middle. While this allowed me to progress easily and relatively quickly, I was still looking at hours and hours of tedium.

Finally, there is a PSP remake of this game; I actually bought a copy of the special edition on eBay, which included a deck of the tarot cards used in that game (though not in this original version) as well as in Ogre Battle, which is a cool bonus item because the cards look great. So cool, in fact, that I bought this even though I don’t own a PSP… Anyway, I’ll get one and play it sometime soon. First, though, I’ll probably go through a few other games. Probably try to get not-hilariously-bad at Touhou, then maybe the Game Boy Advance Tactics Ogre: The Knight of Lodis, another game I’ve owned for years without playing more than a couple hours.