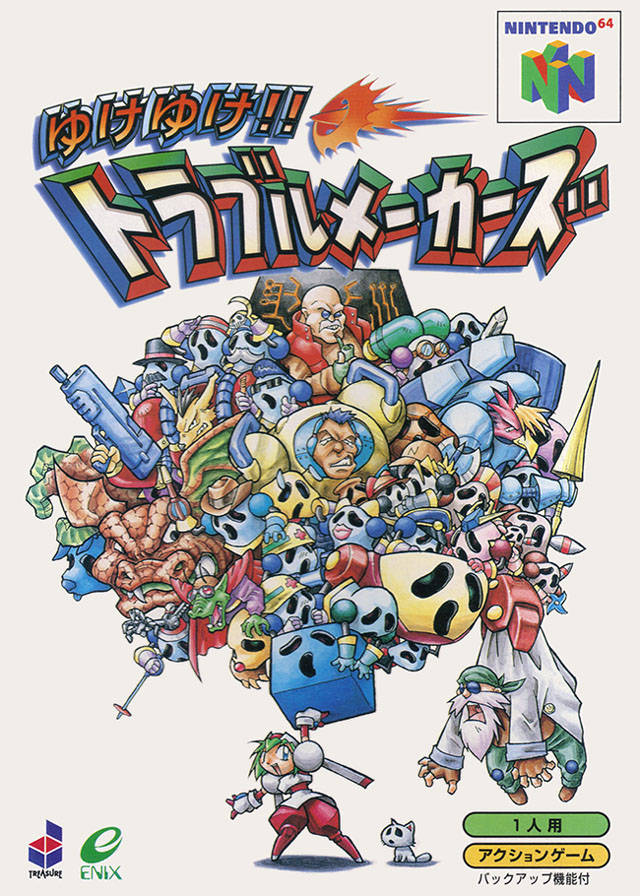 So, this past week I got a request to review a video game. It’s a bit outside the “bibliophile’s journal” theme I’ve been doing, but since I have posted about a few games before I thought it would be a nice change of pace. Also, this guy suggested that I’d look like some kind of nerd if I only write about books all the time, and I certainly wouldn’t want that. Anyone interested solely in Serious Business can come back next week, when I’ll have a post on Klemens von Metternich, followed by more from William Shakespeare.

Before we get to the main subject, though, let’s go back to the mid-90’s. The PlayStation and Nintendo 64 were the coolest things around, because now, for the first time on home consoles, games were in three dee! The days of side-scrolling in a mere two dimensions were gone, and now we could walk around awkwardly in three dimensions. Let me say, I was in elementary school at the time and was the first kid in my class to get an N64, and my social standing among my peers has never been higher, before or since.

Looking back, those early 3D games have, for the most part, aged pretty badly. Even in cases where the designers got the controls right, which certainly could not be taken for granted, the graphics were hideous. Very blocky with few textures was the house style for those early N64 games. Frankly, Super NES games were far more aesthetically appealing.

This 3D cartoony style works somewhat in games like Super Mario 64, since Mario inhabits a fairly cartoony universe anyway and strict realism would be a detriment, but some of these are visually the 3D equivalent of Atari 2600 games. It didn’t matter, though. By the time the novelty wore off game designers had figured out how set up controls for these games, even on the N64’s funky three-handled controller, and even how to make them look halfway appealing visually.

Now, in the midst of this, back in 1997 Treasure released one of the N64’s best but underrated games, Mischief Makers. This one didn’t get much hype at the time, and isn’t well-known even now. I mean, Nintendo Power gave it a few pages of coverage, but in the review gave it a 6.9/10. So much for gaming magazines just hyping up everything! The N64 wasn’t even getting all that many games, so it’s not like it was just overshadowed by anything else; this same issue also gave a 6.9 to the completely forgotten Aerofighters Assault and an 8.1 to Extreme-G, which I vaguely remember playing and enjoying, but give me a break. The brief reviewer comments included Henry’s “Young themes but tough play control” (the play control is fine, and I’m not even sure what “young themes” are but I guess they’re a good thing?); Erich’s “The music made me want to pull my hair out, but the variety kept me interested” (the music’s fine ya jerk); and Leslie’s “Anime fans will love it, but the play control can be frustrating.” Maybe the play control problem isn’t with the game but with your weird frickin’ controller. Also, it’s called “Japanimation.”

Or at least it was last time I checked.

Anyway, a few issues later they even got a complaint in the letters to the editor section from a Jeremy Randazzo, who pretty much nailed the problem: “I can tell you why most people don’t like Mischief Makers: 2-D game play.”

That’s right, Mischief Makers was a side scroller! How dare Treasure waste that glorious 64-bit processing power on a measly two dimensions!

Here’s the thing, though: Mischief Makers is one of the best games that came out for the Nintendo 64. It’s very fun to play, it’s visually appealing, and it has unique gameplay. It just wasn’t in a popular style at the time. Retro and retro-style games like side-scrollers have a following now, partly because of nostalgia and partly because of an appreciation of simpler (in a technical sense) gameplay. In 1997, though, we were just getting away from that; 3D was the future, 2D was the tired and still-recent past, and that was that.

As for the game itself, it has a fairly simple premise. You play as robot maid Marina Liteyears, out to rescue her inventer Professor Theo, who gets kidnapped as much in one game as Princess Toadstool did in ten years, and save Planet Clancer from the big bad Emperor. It’s a platformer, so obviously there’s a lot of running and jumping around, but what sets the game apart is the basic mechanic of grabbing objects and enemies, and shaking, throwing, or jumping off of them.

It’s occasionally a little awkward to control, though Nintendo Power‘s reviewers exaggerate how much of a problem that is; I suspect they just sucked at it. However, grabbing enemies and throwing them around or into each other is very satisfying. It’s hard to explain, but it’s one of those games that’s fun just to run around fighting people in. Heck, it’s fun to bully the good guys even by shaking or throwing them around, too.

The music is fine, often bright and cheery, though not especially memorable, and the graphics technically are rendered in 3D, though the gameplay is entirely two-dimensional. It has a unique, colourful look to it. Being serious for a moment, I know what Leslie was talking about when she mentioned anime fans liking it, because it does have that character design aesthetic, especially in the 2D cutscenes. It even has a little voice acting, and the actors sound like English anime voice actors, for better or worse… okay, mostly worse, but voice acting still wasn’t common at the time, so I’ll give it a pass.

Most of the game is a bit easy. The levels are short, and even the ones that are challenging generally rely on some trick or gimmick. It was really only in the last 1/5 or so of the game that I really began to struggle. Coincidentally, since this game asks the player’s age when creating a save file, I know that I first played this exactly ten years ago, and actually gave up on a boss fight that I almost gave up on this time. The game’s fairly short if you just play straight through, and there isn’t much replay value, but anyone wanting to get more out of the game can do that in two ways. First, each stage has a gold gem and for each one the player finds, he gets to see a little more of the ending, and the only way to see the full ending is, of course, to find all of them. Also, the game keeps track of how long it takes to finish each level and assigns a letter grade to how well the player does, so it can be fun to try for all A- or S-levels.

Is it worth mentioning the story? It’s alright; the characters are all likable enough, and there are a couple plot twists, one of which is a common trope but the other actually isn’t bad. If you’re playing side-scrollers or, heck, even video games generally, for the story, though, I don’t know what to say to you. It’s certainly nice to have, but go read a book ya nerd.

So if you’re into old video games at all, I’d highly recommend this one. Admitedly, I play very few video games these days; last year I only played the two Tactics Ogre games I wrote about (Let Us Cling Together and The Knight of Lodis), Yoshi’s Island, and The Illusion of Gaia, which I didn’t finish. If it’s enough to hold even my interest, though, there’s probably something to it.