Memoirs of a Service Afloat During the War Between the States

Last year, I asked my twitter followers for good books on the War Between the States, and I was promptly informed that I would (not just “might”) enjoy Memoirs of a Service Afloat During the War Between the States, written by Raphael Semmes, captain of the CSS Sumter and, later, the Alabama. Once I got my hands on a copy, I could tell right away it would be a good one because opposite the title page the publisher, Alacrity Press, had a note saying, “This book is a product of its time. Some of the terms and views expressed by the author may reflect common values and usage of his day that are contrary to modern values. They should be viewed in that context.” A trigger warning like that is something I take as a strong endorsement.

Another good sign came in the preface. Semmes explains that, though there’s a common view that historians should be as dispassionate as possible, this approach would only give “a dead history, in other words, a history devoid of the true spirit of history.” He adds, “Such a terrible war as that through which we have passed could not be comprehended by a stolid, phlegmatic writer, whose pulse did not beat quicker while he wrote.” I appreciate this attitude, partly because it makes for more interesting reading when an author is passionate, and also because I’m suspicious of historians who try too hard to be unbiased and removed from the subject. I want to know an author’s own opinions, partly because they’re valuable, since he’s presumably an expert on the topic, and because it’s extremely difficult, if not impossible, to be truly unbiased, so it’s best simply to be honest with one’s own thoughts so that a reader needn’t be so on-guard against subconscious slant. 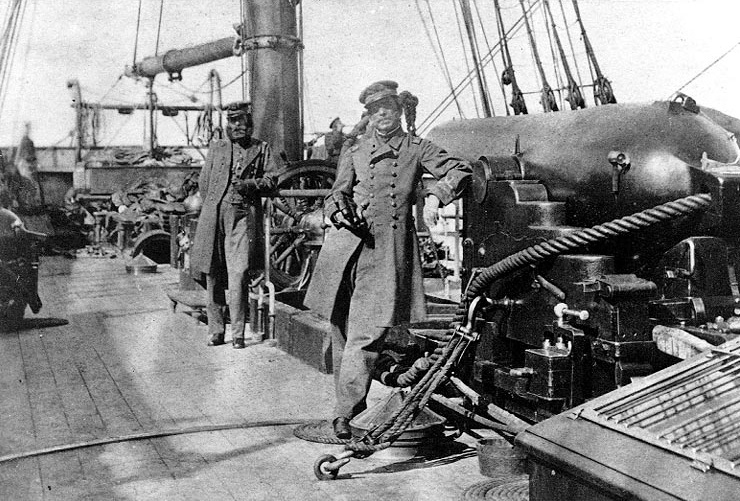 Semmes spends the first few chapters outlining the causes of the war and the case for secession. He argues partly on the basis of Constitutional law and State sovereignty, but the primary cause for the war comes from cultural differences between the North and South. Patrick Henry, he points out, warned against ratifying the Constitution for this reason:

Henry did not object so much to the nature of the partnership, into which his state was about to enter, as to the nature of the partners with whom she was about to contract. He saw that the two sections were dissimilar, and that they had different and antagonistic interests, and he was unwilling to trust to the bona fides of the other contracting party. “I am sure,” said he, “that the dangers of this system are real, when those who have no similar interests with the people of this country are to legislate for us – when our dearest interests are to be left in the hands of those whose advantage it will be to infringe them.”

Later on, he admits that disparate nations can indeed be ruled together, but only in an authoritarian state like Austria or Russia. I would say that republics are essentially a perpetual low-level civil war, even in a mostly homogenous nation, but as Semmes writes, they are especially unmanageable when they attempt to unite radically different people. As it was, though, conflict between the North and South was inevitable, and a recurrence of a common theme in history. Semmes portrays it as essentially a rebuttal of American exceptionalism:

The war of the American sections was but the prototype of many other wars, which had occurred among the human race. It had its origin in the unregenerated nature of man, who is only an intellectual wild beast, whose rapacity has never yet been restrained, by a sense of justice. The American people thought, when they framed the Constitution, that they were to be an exception to mankind, in general. History had instructed them that all other peoples, who had gone before them, had torn up paper governments, when paper was the only bulwark that protected such governments, but then they were the American people, and no such fate could await them. The events which I have recorded, and am about to record, have taught them, that they are no better – and perhaps they are no worse – than other people.

On a side note, I noticed that Semmes, like Robert Lewis Dabney, consistently and casually refers to Yankees as “Puritans,” and occasionally to Southerners as “Cavaliers.” One sees this terminology used today here-and-there, as in the book Albion’s Seed or Mencius Moldbug’s “hyper-Calvinist” theory of the origin of Progressivism, but it’s typically presented as an almost esoteric sort of knowledge. Semmes and Dabney, though, treat this as common knowledge, as if they’d say to us, “Yes, of course Yankees and Southerners derive their differences from these older English divisions.” Dabney even uses the now antiquated eponym “Brother Jonathon” to refer to Yankees. I’ll let those more familiar with American intellectual history determine the full significance of this, but if nothing else it demonstrates that at least a few prominent Confederates saw themselves as part of a conflict that had roots deeper than contemporary debates over things like tariffs, Abolitionism, and States’ rights.

In any case, the bulk of the book is a detailed chronicle of Semmes’s time as captain of the Sumter and then the Alabama, disrupting American trade by capturing and typically burning their merchant vessels. I do mean “detailed,” too – Alacrity Press’s edition is 466 pages of small print. Fortunately, Semmes is an engaging writer, and frequently breaks up the narrative in several ways. Besides relating his engagements with the various ships he encounters, he’ll also offer background information and his own opinions on the places he goes, the people who live there, the individuals he meets, observations about a sailor’s life, explanations of the technical points of navigation and the like, and so on. He reminds me somewhat of Herodotus, who also liked to interrupt the main narrative of The Histories to give his audience background information of the people and places described, as well as discuss things that he simply found interesting, even if they were only tangentially related to the primary topic.

For example, when the Sumter, which relied primarily on steam power, first uses her sails, Semmes explains the romance of old-fashioned seamanship:

This was the first time that we were to make use of our sails, unaided by steam, and the old sailors of the ship, who had not bestridden a yard for some months, leaped aloft, with a will, to obey the welcome order. The race of sailors has not yet entirely died out, though the steamship is fast making sad havoc with it. There is the same difference between the old-time sailor, who has been bred in the sailing-ship, and the modern sailor of the steamship, that there is between the well-trained fox-hound, who chases Reynard all day, and the cur that dodges a rabbit about, for half an hour or so. The sailing-ship has a romance, and a poetry about her, which is thoroughly killed by steam. The sailor of the former loves, for its own sake, the howling of the gale, and there is no music so sweet to his ear, as the shouting of orders through the trumpet of the officer of the deck, when he is poised upon the topsail-yard, of the rolling and tumbling ship, hauling out the “weather ear-ring.” It is the ranz de vache, which recalls the memory of his boyhood, and youth, when under the tutelage of some foster-father of an old salt, he was taking his first lessons in seamanship.

As one more example, while in Singapore he offers some observations on the Chinese and “nation[s] of shop-keepers:”

The most notable feature about Singapore is its Chinese population. I consider these people, in many respects, the most wonderful people of the earth. They are essentially a people of the arts, and of trade, and in the changing aspect of the world must become much more important than they have hitherto been. It is little more than half a century since Napoleon twitted the English people with being a nation of “shop-keepers.” So rapid have been the changes since, that other nations besides Great Britain are beginning to cover the designation as one of honor. Even military France, the very country which bestowed the epithet in scorn, is herself becoming a nation of mechanics and shop-keepers. Industrial Congresses, and Palaces of Industry attract more attention, in that once martial country, than military reviews, and the marching and countermarching of troops on the Campus Martius. An Emperor of France has bestowed the cordon of the Legion of Honor on a Yankee piano-maker! These are some of the signs of the times in which we live. And they are signs which the wise statesman will not ignore. A nation chooses wisely and well, which prefers the pursuits of peace to those of war; and that nation is to be envied, which is better constituted by the nature of its people for peaceful, than for warlike pursuits. This is eminently the case with the Chinese. Nature has kindly cast them in a mould, gentle and pacific. They are human and have, therefore, had their wars, but compared with the western nations, their wars have been few. The Taeping rebellion of our day, which has lasted so long, had its origin in the brigandage of an idle and leprous soldiery, who sought to live at ease, at the expense of the honest producer.

Now, that last passage talking about Singapore brings up one of my favourite aspects of the book. Usually, one thinks of the War Between the States as an almost entirely local conflict, but Semmes and his men visit five continents, sailing around the Caribbean, to Brazil, Spain, South Africa, Malaysia, and all the way to Singapore. Though the war was ultimately won or lost on land, the small Confederate Navy did noticeably harm Yankee commerce, and thus made a notable contribution to the war effort, and there’s just something neat about knowing there was some Confederate presence in all these different places.

Finally, one of the most notable parts of Semmes’s character is his sense of honour and respect for the law; he frequently emphasises how he kept strictly to the laws of nations, often in contrast to his Yankee opponents. When I decided to start deepening my knowledge of the war, my primary interest was in the character of the men involved, and this concern with honour seems, so far, to be a common trait among the Confederates, and a contrast with their Northern opponents. This book was recommended to me partly because of Semmes’s concern with just this aspect of the conflict, and I’d highly recommend it to anyone else for the same reason, in addition to Semmes’s covering of a relatively little-known, but often fascinating, part of the war.