So, it seems that Gardner overstates the case – but I do think he’s partly right. The second issue raised in the above quotation is: Are the Alice novels really books for adults? Why would an adult read these novels?

There are a few possible answers. One is nostalgia; the Alice novels, even if less accessible to children than they used to be, are still very much associated with childhood and remind adult readers of their own youth. A more cynical answer is that it’s a symptom of extended adolescence, much like adult colouring books or the obsession over Harry Potter or Star Wars. There probably is a grain of truth to this, as well, though an interest in (not, of course, an obsession over) Carroll’s work is more justifiable than Rowling’s. For one, Alice has embedded itself not only into popular culture, but is so often referenced in other works that it’s become one of the extremely few children’s books that could be considered part of the literary canon.

You see, the key to grasping all of Carroll’s work, not just the Alice novels, is to understand that “nonsense” does not simply mean “random.” Consider, for example, this famous exchange between Alice and the Cheshire Cat:

`Cheshire Puss,’ she began, rather timidly, as she did not at all know whether it would like the name: however, it only grinned a little wider. `Come, it’s pleased so far,’ thought Alice, and she went on. `Would you tell me, please, which way I ought to go from here?’

`That depends a good deal on where you want to get to,’ said the Cat.

`I don’t much care where–‘ said Alice.

`Then it doesn’t matter which way you go,’ said the Cat.

`–so long as I get SOMEWHERE,’ Alice added as an explanation.

Alice felt that this could not be denied, so she tried another question.

The Cheshire Cat is, as Alice notices, completely correct on all points.

This is why I recommend that adults read an annotated edition of the novels, like Gardner’s. Though they’re entertaining even on a surface level, there’s more going on than is immediately obvious. This first applies, of course, to the referential humour that can be hard to catch for modern audiences, as well as inside jokes intended for Carroll’s initial audience, the daughters of his friend Henry Liddell. During the caucus race chapter, for example, each of the various animals present represents someone they knew. For instance, Gardner explains, “The Lory, an Australian parrot, is Lorina, who was the eldest of the [Liddell] sisters (this explains why […] she says to Alice, ‘I’m older than you, and must know better’).”

This sensible nonsense is to be expected, really, since Carroll’s day job was a mathematician. What happens when a mathematician writes a children’s book? Well, when Alice gets to the bottom of the rabbit hole and tries to think back on her lessons, she says to herself, “I’ll try if I know all the things I used to know. Let me see: four times five is twelve, and four times six is thirteen, and four times seven is–oh dear! I shall never get to twenty at that rate!”

Why won’t she get to twenty? Gardner explains:

He then gives a recommendation for further reading. That’s an extreme example, but far from an isolated one.

Now, this sort of thing has encouraged a great deal of over-analysis of the novels, which is why I highly recommend Gardner’s edition of them. Though some of his notes are a bit of a stretch, he stresses in the introduction that he tries to avoid both pedantry and overemphasising symbolic interpretation of the works. One example he points out for why symbolism shouldn’t be overstated is Tweedledee and Tweedledum’s famous poem, “The Walrus and the Carpenter,” from Through the Looking-Glass:

As a check against the tendency to find too much intended symbolism in the Alice books it is well to remember that, when Carroll gave the manuscript of this poem to [John] Tenniel for illustrating, he offered the artist a choice of drawing a carpenter, butterfly, or baronet. Each word fitted the rhyme scheme, and Carroll had no preference so far as the nonsense was concerned. Tenniel chose the carpenter.

Speaking of Tenniel, the above is why it’s also best to pick an edition with his original illustrations. Though many artists have illustrated these novels, Tenniel’s work will always be preeminent because he worked directly with Carroll, so his will be closest to what Carroll intended for his work – not that he didn’t take some liberties. Carroll specified that the White Knight in the Looking-Glass world mustn’t have whiskers or look old, and, well: 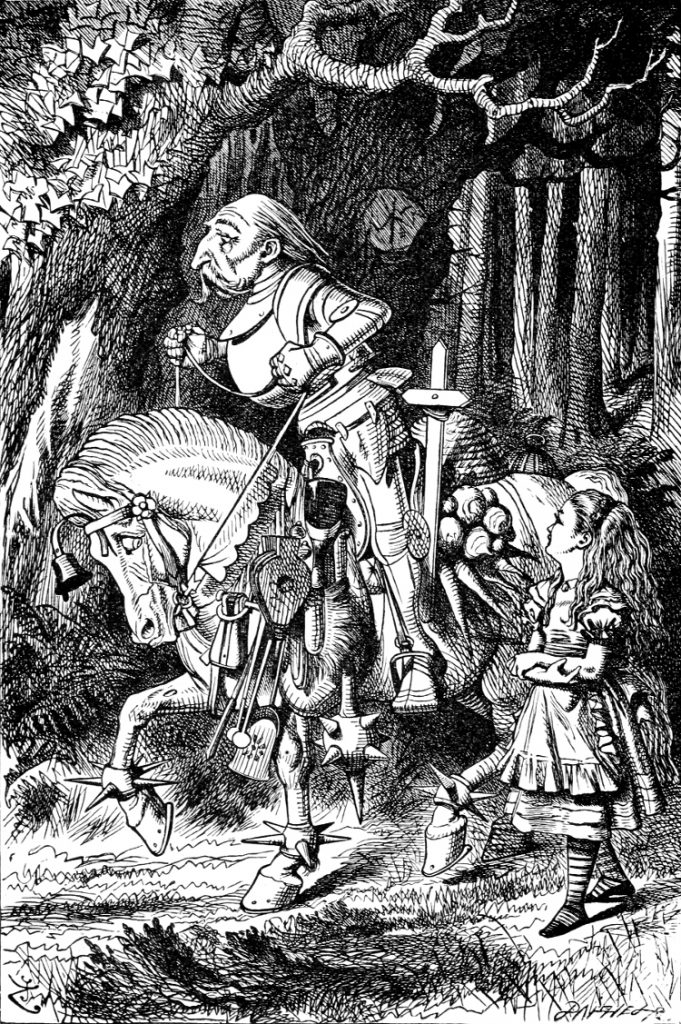 In any case, I’ll add one more note on choosing which version of the books to get. Often, when looking for annotated editions of classic literature, one looks to Norton Critical Editions, and there is one available for these, edited by Donald J. Gray. It does have two advantages over Gardner’s version. First, it includes Carroll’s epic poem The Hunting of the Snark, and second, it includes a section at the back of background material, including excerpts from biographies of Carroll, his letters, and diaries. Having Snark is convenient and though the biographical details aren’t necessary to understanding the works, they are interesting for those who like to know a bit about the authors of what they read.

However, those are Norton’s only advantages. The book, though good quality for a paperback, is nowhere near as handsome a volume as Gardner’s edition. The notes, though useful, are much shorter than Gardner’s and sometimes just paraphrases of him. Some readers may prefer the more minimalistic notes, but Gardner is so obviously enthusiastic about his subject that he’s always interesting, even when going off on a tangent. Then there’s the Criticism section, which, well…

See, there are a few essays that are alright. Most, though, are just academic blathering. Not harmful necessarily, except insofar as wasted time is harmful. Then you get essays like Gilles Deleuze’s:

In any case, if you’re looking for some light reading or perhaps a gift for your favourite Carrollian, get a copy of The Annotated Alice. To adapt an observation of the White Knight, everyone who reads it enjoys it, or else – or else they don’t, you know.