The Hunting of the Snark

Now, everyone knows about Carroll’s Alice novels, which I wrote about last week, but Snark, though not obscure, and certainly more widely read than, say, Sylvie & Bruno, is generally only popular among Carrollians, and that’s too bad. In short, it’s exactly what one would expect an epic poem by Carroll to look like; imagine “Jabberwocky” extended to the length of a short book (about thirty-five pages in one edition I own), and you’ll be close to the mark. In style, it’s more-or-less a condensed, poetic Alice, and if that sounds appealing to you, you’ll almost certainly enjoy it. 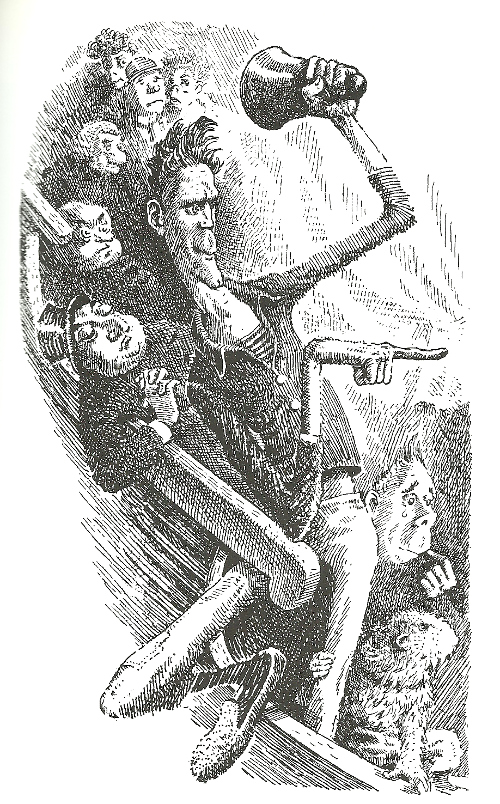 Mervyn Peake’s illustration of the Bellman leading his crew

At heart, Snark is an adventure story, about a hunting party setting off on a voyage to find the strange and mysterious Snark creature, lead by a Bellman, and consisting of a Boots, a maker of Bonnets and Hoods, a Barrister, a Broker, a Billiard-maker, a Banker, a Beaver, a Baker, and a Butcher. So what, exactly, is a Snark? The Bellman explains its five distinguishing characteristics:

“Let us take them in order. The first is the taste,
Which is meagre and hollow, but crisp:
Like a coat that is rather too tight in the waist,
With a flavour of Will-o’-the-wisp.

“Its habit of getting up late you’ll agree
That it carries too far, when I say
That it frequently breakfasts at five-o’clock tea,
And dines on the following day.

“The third is its slowness in taking a jest.
Should you happen to venture on one,
It will sigh like a thing that is deeply distressed:
And it always looks grave at a pun.

“The fourth is its fondness for bathing-machines,
Which it constantly carries about,
And believes that they add to the beauty of scenes—
A sentiment open to doubt.

“The fifth is ambition. It next will be right
To describe each particular batch:
Distinguishing those that have feathers, and bite,
From those that have whiskers, and scratch.”

Now, as with the Alice novels, the humour lies in the nonsense but, also like Alice, there is a method here. Consider, for example, how one goes about hunting a Snark:

Martin Gardner, whose The Annotated Alice is so invaluable, also edited an annotated edition of The Hunting of the Snark. This can’t be proved one way or another, but Gardner suggests that the method of hunting Snarks is related to their five characteristics given by the Bellman.

The forks are for eating crisp Snark meat. The railway share appeals to the Snark’s ambition to become wealthy and so can be used for baiting a death trap. Smiles are to let the Snark know when a pun has been perpetrated. The soap is of course for the bathing-machines that the Snark carries about, and the thimble is used for thumping the side of the creature’s head to wake him up in time for five-o’clock tea.

As another example, there is the Rule of Three established in the first two stanzas – anything stated three times is true. This rule is reiterated a few times throughout the story, and allows for another math joke when the Butcher declares, while out with the Beaver, that a sound they’d heard is the “voice of the Jubjub,” a particularly dangerous species of bird. He repeats the statement twice, but then decides to make sure that he has, in fact, said it thrice mathematically:

“Taking Three as the subject to reason about—
A convenient number to state—
We add Seven, and Ten, and then multiply out
By One Thousand diminished by Eight.

“The result we proceed to divide, as you see,
By Nine Hundred and Ninety and Two:
Then subtract Seventeen, and the answer must be
Exactly and perfectly true.

Gardner points out that the procedure can be written out algebraically, like so:

So, of course the Butcher came up with the number he was solving for – this equation always simplifies to x. 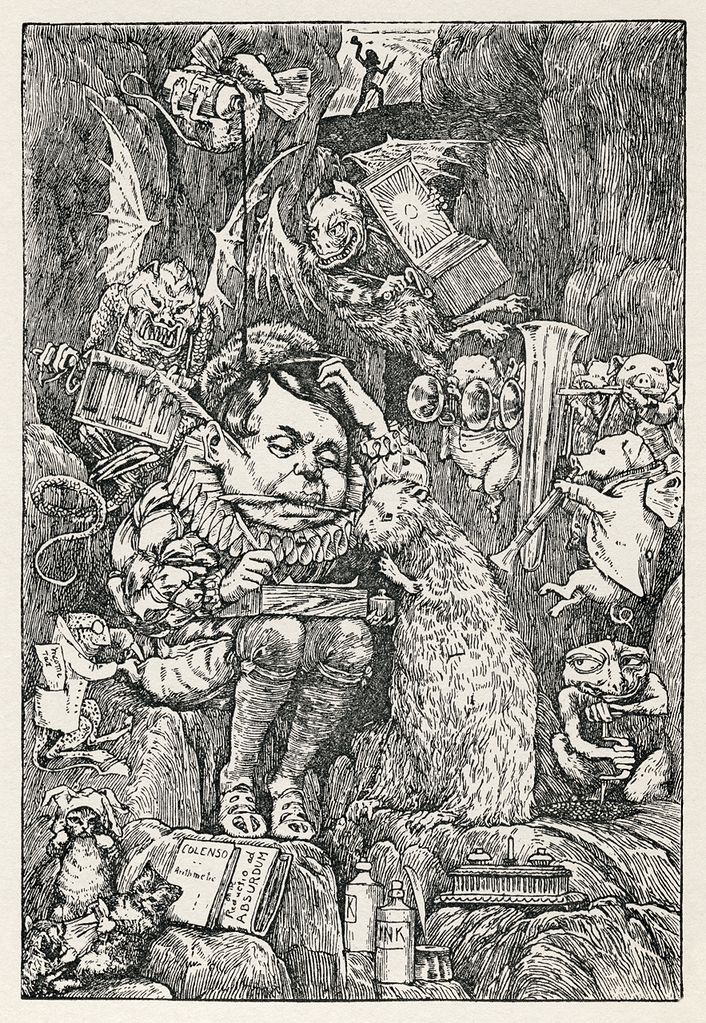 Now, though Snark isn’t particularly well-known, there are a few editions to choose from if you’re looking for a copy. One option is the Norton Critical Edition of Alice in Wonderland. As I discussed last week, this is a good quality paperback and conveniently does have Snark and the two Alice novels. However, the annotations and background materials aren’t particularly helpful, it isn’t illustrated, and the critical essays provide, with a few exceptions, negative value.

There’s a hardcover edition published by Methuen, with illustrations by Mervyn Peake. The paper quality is good, and Peake’s illustrations are perfect. Besides being a novelist in his own right best known for his Gormenghast series, he’d also illustrated Alice. His style matches Carroll’s very well, and his work is arguably as good as those done by Henry Holiday, the original illustrator, whose style is more realistic aside from oversized heads and, of course, the subject matter of the work. Now, Methuen’s edition doesn’t include annotations or any extra material aside from concept art by Peake. That’s certainly worth having, and notes and explanatory essays aren’t necessary for understanding the poem, but they’re still helpful. Nonetheless, this one’s a solid choice if you just want a nice edition of the poem itself

Finally, there’s The Annotated Hunting of the Snark: The Definitive Edition, edited by Martin Gardner. As with The Annotated Alice, it’s a handsome volume in itself, and Gardner’s notes are often helpful and interesting. However, they aren’t as helpful and interesting as those for Alice; Gardner goes off on more tangents and the material is more speculative here. Really, there’s just less to work with overall compared to Alice.

On the positive side, though, that leaves room for much more supplementary material. Besides Gardner’s preface, there’s a moderately interesting introduction by Adam Gopnik, a few supplemental illustrations by Peter Newell, a short unofficial “sequel” called “The Clue,” by J. A. Lindon, and a short article by Henry Holiday. It also includes a Hegelian commentary on the poem by “Snarkopohilus Snobbs,” a pen name of philosopher F. C. S. Schiller, which does a fine job parodying the type of pseudo-academic blather that Norton’s editor takes seriously. It ends with an extremely thorough bibliography of various editions and translations of the poem, as well as additional resources. One final point is that this has Holiday’s original illustrations, though as mentioned above, whether you prefer his, Peake’s, or perhaps someone else’s comes down largely to personal preference.