Now, part of any adaptation’s success is knowing what parts of the source material to keep and what to exclude. Bakshi’s Lord of the Rings failed in part because it tried to stuff two books into a two hour movie, whereas Peter Jackson’s version mostly succeeded because each of the three books had its own film. However, Jackson’s adaptation of The Hobbit has often been criticised, justly, for bloating one fairly straightforward novel into a massively overdone trilogy of movies. Rankin/Bass couldn’t fit everything into ninety minutes, but as Dr. Charlton wrote in his review, they do hit the most important points and allow each scene to develop fully. 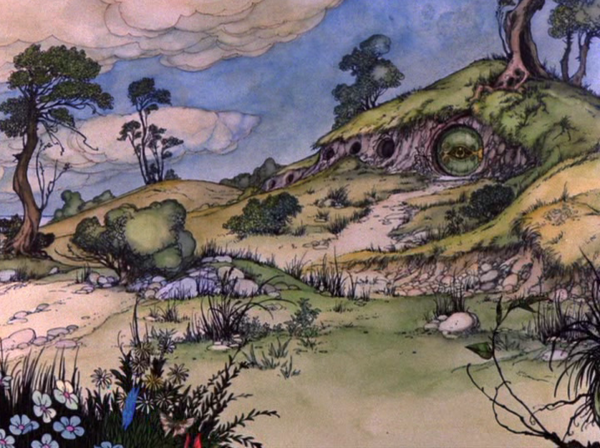 The animation is decent, though one needs to keep in mind that this is a 1977 made for TV movie. The backgrounds have a pleasant, watercolour look, though they aren’t as nice as Bakshi’s; of course, Rankin/Bass’s movie doesn’t have hideous rotoscoped characters, so chalk this category up as a win for R/B. The animation isn’t quite smooth, but not so rough as to be distracting. The action scenes are a bit weak, though they aren’t helped by the movie’s insistence on showing little to no actual violence. That’s a big problem for the Battle of the Five Armies, much of which is shown from a bird’s-eye-view, where everyone looks like a dot moving around. As a bit of trivia that I was tipped-off to via Twitter, much of the animation work was done by Topcraft, a Japanese studio that would go on to work on Nausicaä of the Valley of the Wind, before being essentially dissolved and reformed in 1985 as Studio Ghibli. That said, I don’t think I’d have guessed that this connection exists, though Dr. Charlton does mention the backgrounds being “rather beautiful in a Japanese precursor-to-Ghilbli kind of way.”

Moving on, though, the voice acting is good, except for the king of the Wood-elves’ distracting accent (is it supposed to sound Russian? German? who knows?). 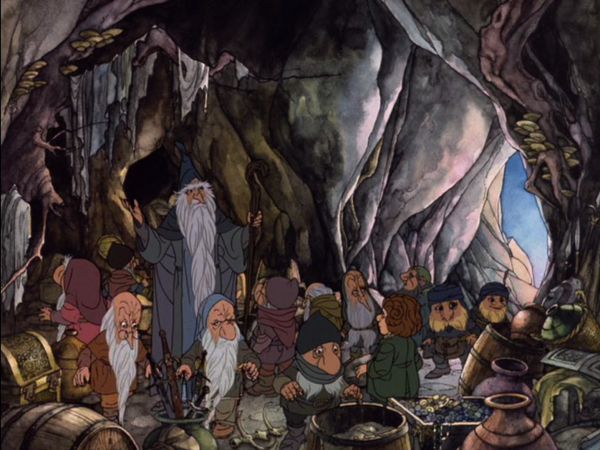 The company sorts through some trolls’ stolen treasure

Quality of character designs varies. Gandalf and Thorin look good, Bilbo’s a bit goofy but not bad, the dwarves look passable. Among the supporting cast, the trolls and goblins look suitably grotesque for a children’s film, the men of Laketown look like men from any other cartoon from roughly this era, the wood elves are a little silly.

Tolkien’s The Hobbit has two scenes that everyone seems to love, so it’s critical to get them right. The first is “Riddles in the Dark,” and Rankin/Bass pulls it off about perfectly. Bakshi and Jackson both use the same basic design for Gollum, which I honestly don’t care for. I do like this movie’s design better, at least taken on its own, but when taken in the larger context of the Tolkien’s universe there’s one major problem. Gollum is supposed to belong to a race either of or related to hobbits, but here, even accounting for the physical changes from living in a cave for so long, he looks nothing like that. A more hobbit-like design would’ve suggested this link to the larger story. 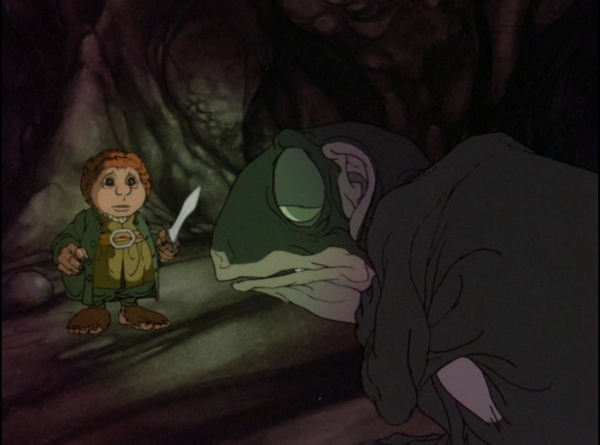 Both are better at riddles than I am, honestly

That leaves Smaug, whose voice and mannerisms remind me of Shere Khan. He has the same cool confidence that can easily turn into ferocity as Disney’s best villain. His body looks like most any other dragon from a classic fantasy story, but his head has a more feline look. This looks good in close up, but seems mismatched with his reptilian body. 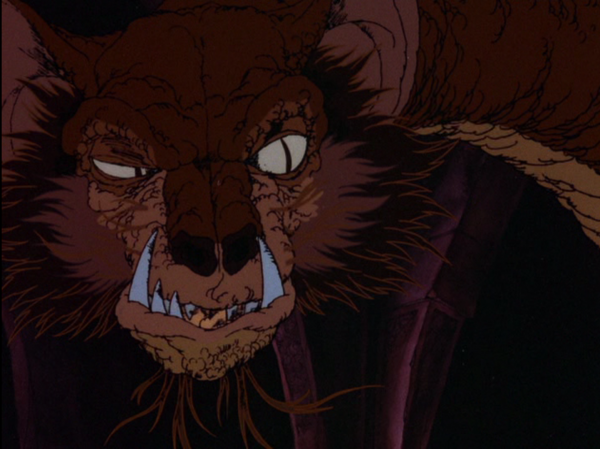 One striking thing about Tolkien’s novels is how many songs and poems they have, so it’s appropriate that the soundtrack is one of the film version’s highlights. Dr. Charlton mentioned the song “Gandalf’s Reflection,” but the whole soundtrack is excellent.

One theme common to both of Tolkien’s major novels is the conflicting desire to live a comfortable, hobbit-like life with the desire for glory and adventure, here expressed by the dwarves. This contrast has always interested me because I, and I suspect many people, have wanted both at different times. Most of the time, I do prefer the hobbit life of a comfortable house, good food, a book and a pipe. However, if a company of dwarves showed up at my door inviting me to help them kill a dragon and reclaim their kingdom, I don’t think I’d refuse. This movie doesn’t really go into that much, aside from generic calls to adventure one expects in this sort of story.

Ultimately, the film’s only shortcomings come from its format. The original novel is noticeably aimed at a younger audience than The Lord of the Rings, and the movie is aimed at a younger audience than that. Also consider that this was made for television, and the result is that an already relatively straightforward adventure novel is stripped down even more, and with a few awkward scene transitions clearly intended for a commercial break. That said, that still leaves a very fun adventure movie, which is certainly worth something, even if it’s not a must-watch film. If you’re a fan of The Hobbit, animation, or just want a good movie to watch with a child, definitely check this out. 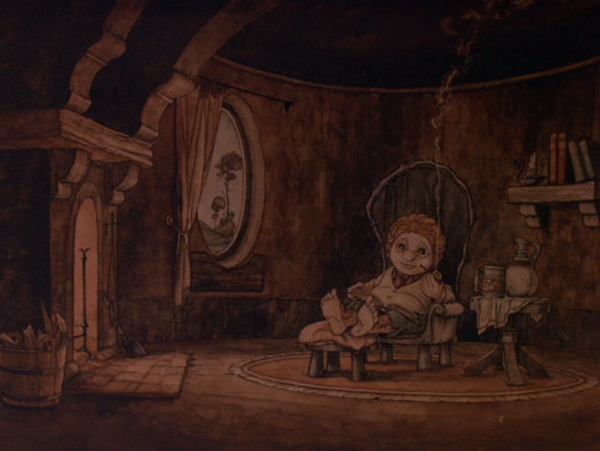 I’ll probably never live as comfortably as this hobbit