After watching The Hobbit, I thought it would be worth watching some more of Rankin/Bass’s films, and initially planned on moving on to The Return of the King next (on my own schedule, which some would call extremely slow but which I prefer to think of as simply a stately pace). At a friend’s insistence, though, I skipped ahead a bit and watched The Last Unicorn, their adaptation of Peter Beagle’s novel of the same title from 1982. Since a couple of people have expressed interest in hearing about it, I figured I’d go ahead and share a few brief thoughts on the movie here.

First, the film has a mythic feeling to it, which I appreciate. The movie opens with moving the camera through a dense forest, and the opening credits are done in a style that mimics illuminated manuscripts, in a manner that reminds me of some of Disney’s “storybook openings,” like Sleeping Beauty or Sword in the Stone, or a less elaborate version of the opening myth section of Watership Down. You can take a look for yourself on YouTube. Two hunters complain of not finding any game, and the older of the two surmises that it must be because of a unicorn’s presence, which would also explain why it’s always springtime there. The younger is incredulous, but the old man is, of course, correct, and they leave the forest as he shouts good wishes to the unicorn, as she is the last of her kind. Our equine protagonist hears this and is troubled by the possibility, and sets out to find out if this is true, and to learn what became of the others. 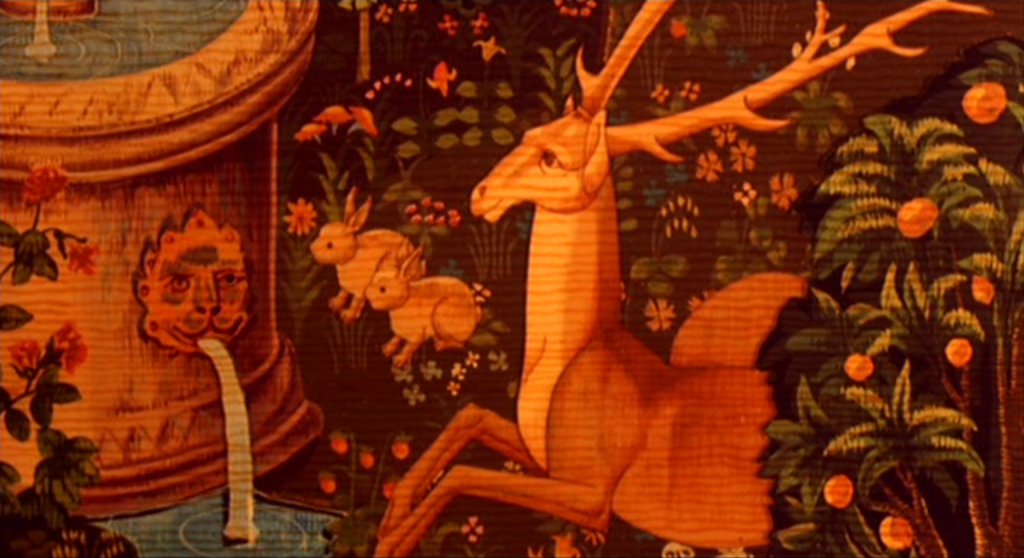 From here, one could easily imagine a fairly standard fantasy adventure story, along the lines of Rankin/Bass’s version of The Hobbit. One of my few criticisms of that film was that there wasn’t a lot going on besides the adventure, but Unicorn, though still a children’s film, does offer the audience more to chew on thematically. To give one example, one of the most interesting characters is the antagonist, King Haggard, who used a monster, the Red Bull, to drive all the unicorns into the sea outside his castle where they’d all be his. In line with fantasy tropes one would expect him to be doing this for some sort of power, but no – he’s looking for happiness. He says that he keeps nothing around that doesn’t make him happy, and his castle is surprisingly bare. The only people even there are his son, Prince Lir, and a hired wizard. I almost feel bad for him, and for a children’s fantasy film this is good stuff. 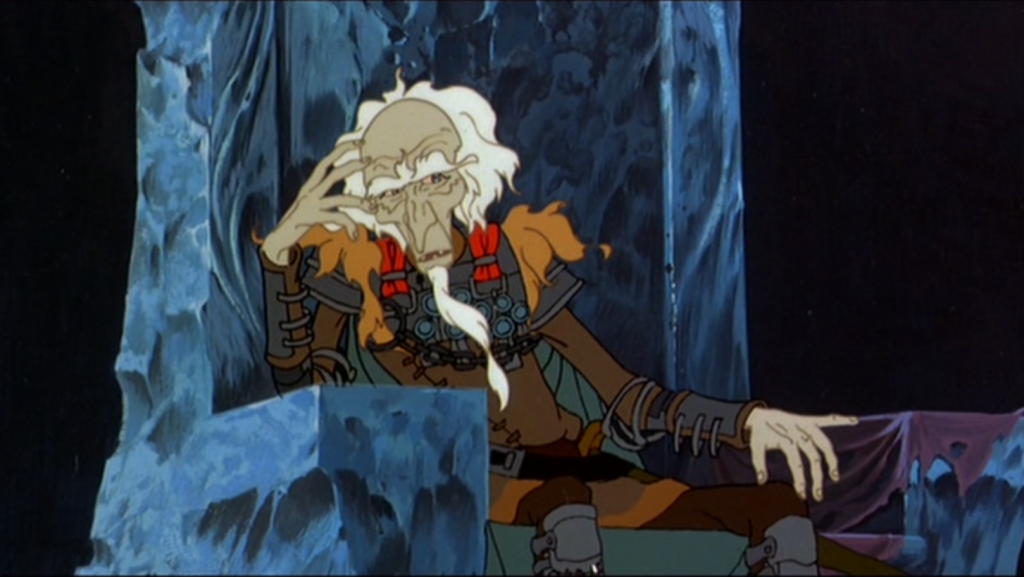 The voice acting is as good as one would expect from a cast that includes actors famous enough for even me to recognise them. My favourites are the magnificent Christopher Lee, who voices Haggard, and Angela Lansbury, who I know mostly because of her role as Mrs. Lovett in Sweeney Todd, who plays Mommy Fortuna. It also stars Mia Farrow as the unicorn, Alan Arkin as Schmendrick the magician, and Jeff Bridges as Prince Lir. German-speakers may be interested to know that Lee also voiced Haggard in the German dub. The screenplay was written by Peter Beagle himself, and is generally good, though the script feels a little awkward in places.

The animation and character design is very similar to The Hobbit, which is natural since both were produced by Rankin/Bass and animated by Topcraft in Japan. Since this is a feature film and not made for TV as The Hobbit was, though, it’s a noticeable step up in quality, though whether one cares for this style of character design is, I think, a matter of personal preference. I keep going back-and-forth on it, myself. One quirk I noticed is that though movement is fluid, characters tend to be absolutely still until they do start to move. This isn’t a major problem and is true to some extent for pretty much all animation, since it takes some work to include the subtle movements of real people (e.g., shifting one’s weight, or tilting one’s head slightly), but it’s more noticeable here and makes some of the movement feel unnatural. 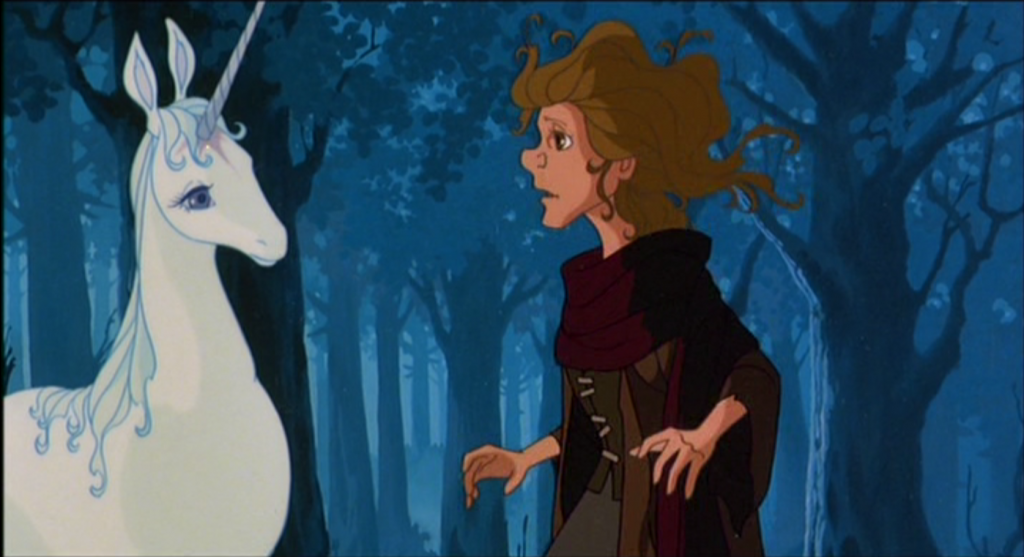 The music was written by Jimmy Webb and performed by America and the London Symphony Orchestra, and is another highlight. You can hear the main theme in the video above, at about the 2:20 mark. This seems to be a strength for this studio, since The Hobbit also benefited from an excellent soundtrack.

Since this is a G-rated children’s film, perhaps I should mention that besides standard fantasy violence there is a scene with nudity, albeit covered up like a children’s book version of Adam and Eve, and full frontal harpy boobs (which harpies apparently have three of), which is actually a little gross. I wouldn’t consider this a problem, but some parents may want to be aware of it.

So, overall, I’d give The Last Unicorn much the same recommendation as The Hobbit. I haven’t read Beagle’s novel, but since he did write the screenplay fans of the original will likely be interested, as will anyone who enjoys animation or is looking for a movie to share with their child. 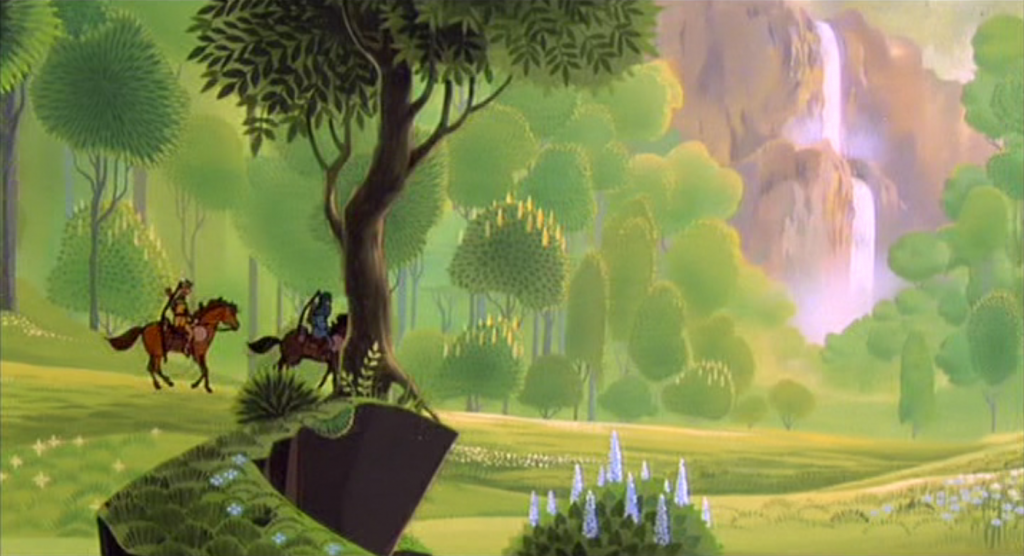