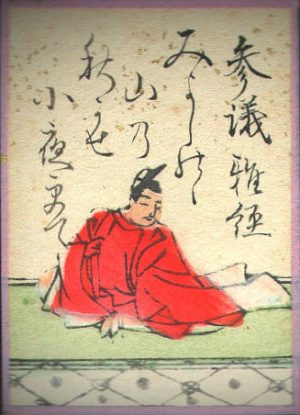 The first friend we’re making in the Hundred Friends project is Fujiwara no Masatsune, a Japanese poet and editor who lived 1170-1221. His picture and this poem is on the card to the right, and you can read a little more about both over here, if you like.

As I mentioned in the introductory post, this will mostly be an English project, but since the idea came from the Japanese anthology Hyakunin Isshu, I thought it would be appropriate to begin with a poem from that collection. This is the ninety-fourth poem in that book, and in Mostow’s translation goes like this:

Fair Yoshino,
the autumn wind in its mountains
deepens the night and
in the former capitol, cold
I hear the fulling of cloth

Since I know a little Japanese, though, I used the original:

How do you read that?

One thing I noticed while memorising this was how sparse it is. Rather than providing any sort of narrative or even describing a scene, it’s more like a series of images. It reminds me a lot of what Ezra Pound called “imagist” poetry, which relies on just this type of technique. The most famous example is his own extremely short “In a Station of the Metro,”

The apparition of these faces in the crowd:
Petals on a wet, black bough.

As I’ve written about before, this isn’t even a complete sentence. It’s simple, and it takes some getting used to, but I’ve grown to love this sort of poetry. It’s like the literary equivalent of a landscape painting, or instrumental music. It won’t teach you the meaning of life or whatever, but it’s just pleasant to be with. To repeat my own earlier advice, this is the type of poem you should repeat to yourself a few times and savour, like a fine meal.