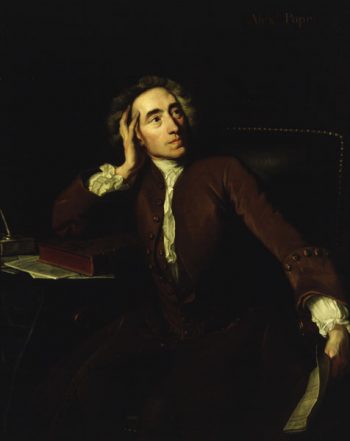 After our brief visit in Japan, we come home to the English-speaking world to see one of our most famous poets, Mr. Alexander Pope. Though he did achieve financial stability and a good reputation during his lifetime as a respected poet and accomplished translator, his early life was difficult due to health problems (specifically, turberculosis of the spine, as well as being trampled by a cow as a child). Also, he was born in 1688, the same year as the “Glorious” Revolution, so he and his family were subject to the anti-Catholic legislation passed shortly afterward. For example, he was barred from attending university and so had to make due as an autodidact. This doesn’t seem to have held him back too much intellectually, though, and so he should serve as an inspiration for autodidacts everywhere.

The poem I’ve memorised is actually a selection from a longer work, An Essay on Criticism, but it’s probably the most famous part of that essay:

A little learning is a dang’rous thing;
Drink deep, or taste not the Pierian spring:
There shallow draughts intoxicate the brain,
And drinking largely sobers us again.
Fir’d at first sight with what the Muse imparts,
In fearless youth we tempt the heights of arts,
While from the bounded level of our mind,
Short views we take, nor see the lengths behind,
But more advanc’d, behold with strange surprise
New, distant scenes of endless science rise!
So pleas’d at first, the tow’ring Alps we try,
Mount o’er the vales, and seem to tread the sky;
Th’ eternal snows appear already past,
And the first clouds and mountains seem the last;
But those attain’d, we tremble to survey
The growing labours of the lengthen’d way,
Th’ increasing prospect tires our wand’ring eyes,
Hills peep o’er hills, and Alps on Alps arise!

Well, we have the rhymed couplets that Mr. Pope is known for. This form was very common at the time but has long since fallen out of fashion, which honestly is fine with me since they’re a little boring. Also, they made this selection oddly more difficult than I expected – rhymes make memorisation easier in general, and memorising the couplets was simple enough, but each stands almost on its own, so the hard part was tying them all together in one unit and in the right order. In other words, rhymes help one to form sets of lines into “chunks,” so for example a rhyme scheme of abba gives you a four-line chunk. Unfortunately, couplets give a set of a mere two lines.

In any case, the poem itself is relevant to all autodidacts like Mr. Pope. When we study anything of substance, it’s easy and tempting to settle for a merely surface-level understanding of the subject. However, this is a dangerous attitude to take. We come away with a few facts, but no real understanding, and what facts we have are easily confused or forgotten. To quote another author, Bl. John Henry Newman, “Confused, inaccurate knowledge is no knowledge. It is the very fault we find with youths under education that they use words without meaning, that they are wanting in precision and distinctness, that they are ignorant of what they know and what they do not know.” I’ve covered some similar thoughts from Cardinal Newman previously.

I thought this would be an appropriate poem to cover early on because, as discussed in the introductory post, the best way to “drink largely” when attempting to understand a poem is to commit it to memory. So, whether you’re joining me in the study of poetry or if you’ve taken on another subject, remember to “Drink deep, or taste not the Pierian spring!”