After covering Sappho a couple weeks ago, I figured I’d move on to another of Greece’s most famous poets, Pindar. Fortunately, his work is much better preserved than the poetess of Lesbos, as we have several dozen of his poems. He made his name writing odes for the victors of the four Panhellenic games, the Olympian being the most famous of these, but also including the Isthmian, Nemean, and Pythian. To be specific, these odes were choral lyrics, which means that they were sung with musical accompaniment. Unfortunately, as far as I’m aware, we have little idea of what this music would’ve sounded like, so the words must stand on their own.

Even without the tune, though, my understanding is that the original Greek is still impressive. Pindar was widely respected in his own time, enough so that the victors of the games were willing to pay him for his work (including, as a side note, our old friend Hiero), and many poets since have admired him and even borrowed his style. Horace is the most famous example, but in English we also have Ben Jonson and Thomas Gray, among others. Edith Hamilton, in her book The Greek Way, also praises his odes highly, but notes that they’re extremely difficult to translate. Poet Abraham Cowley, another author of “Pindarics” in English, similarly noted that “If a man should undertake to translate Pindar word for word, it would be thought that one Mad man had translated another.” We’ll return to the issue of translation shortly. 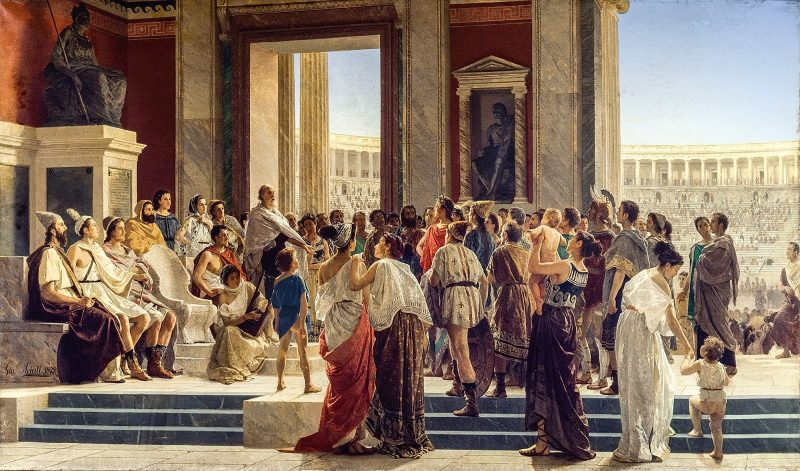 Now, almost all of the odes are very similar in terms of structure, style, and themes, so taking a look at a couple of them gives a good idea of the entire body of work. To start, let’s walk through the first half “Nemean 6” (no, they don’t have more interesting titles, just a number and the event they were composed for).

There is one race of men, and one of gods,
though from one mother we both draw our breath.
A division of power keeps us entirely separate:
the one is nothing, the other has an eternal home in the secure brazen heaven.
Even so, we resemble the immortals in some respects,
in greatness of mind or of stature,
though we do not know by day or night
what finishing line destiny has marked out for us to run towards.

So, we have a mythical touch right at the start, and though he’s getting ready to praise someone by comparison to the gods, note that he also makes clear that the victor, Alcimidas of Aegina, winner in the boys’ wrestling event, is by no means equal to the gods, nor is any other man (or boy, in this case). Though the odes were, of course, written primarily as praise, the Greeks cared a great deal about hubris, so Pindar also takes the opportunity to urge some degree of humility. He then introduces the champion:

And now Alcimidas gives us the proof to see
how inborn talents resemble crop-yielding fields,
which by turns yield men an abundant livelihood from the ground
and then again lie fallow and so gain strength.

Note here, by the way, that Pindar specifies that his talents are “inborn.” Hamilton points out in The Greek Way that Pindar was very much a supporter of aristocracy, in an age when democratic governments were becoming more common. Hamilton doesn’t approve of the attitude, but does grant that there’s some romance to supporting a lost cause which has provided Pindar a good deal of sympathy from later generations. To continue:

Indeed, there has come from the lovely games at Nemea
a competitor who has followed this destiny fixed by Zeus
and now shows himself to be no portionless hunter at wrestling,
but setting his feet in the kindred tracks of his grandfather Praxidamas;
for he was a victor at Olympia, the first to bring garlands back
from the Alpheus to the clan of Aeacus; five times crowned at the Isthmus
and three times at Nemea, he rescued Socleides from obscurity,
so that he became the greatest of the sons of Hagesimachus—
for he had three prize-winning sons,
who tasted hardship and reached the peak of excellence.
Helped by the gods, their boxer’s craft has shown us that no other house
is holder of more crowns, won at the very centre of Hellas.

What does an athlete need for success? The right blood, and the help of the gods. Note again the emphasis on family; Alcimidas is the subject of the ode, but Pindar praises his father and grandfather for their achievements, as well, including the honour of raising sons who also competed and won in the games. Their home towns also receive some of the honours.

I hope in this bold boast to hit the mark full on,
shooting like an archer from my bow.
Come, Muse, guide a glorious wind of poetry onto this house,
for when men die it is songs and stories that recall their fine deeds;
in these the Bassidae, a family famed of old, are not deficient
for their ships carry a cargo of their own praise,
and by virtue of their noble achievements
they can give the Pierians’ ploughmen much matter for hymns.

I like the line “for when men die it is songs and stories that recall their fine deeds.” Pindar may have been giving himself and fellow poets a pat on the back, but he’s right. We know many of these victors precisely because of Pindar’s odes, which provided his patrons with an excellent return on their investment, however much they paid him. There are similar examples, as well. In Dante Alighieri’s Divine Comedy, many figures are far more famous for their appearance in Dante’s epic than for their own achievements, which no doubt would’ve been quite shocking to them and their contemporaries.

The rest of “Nemean 6” continues in similar manner. As another example, let’s also spend a few minutes looking at “Olympian 2,” written for Theron of Acragas, winner of the chariot race. It begins:

My hymns, commanders of the lyre,
which god, which hero—which man shall we celebrate?
Zeus is indeed lord of Pisa, and Heracles
founded the Olympic games as the first-fruits of war;
but the man we must proclaim is Theron,
for his victory with the four-horsed chariot.
He is just in his regard for strangers,
a strong tower of defence for Acragas,
the crowning glory of a famous family line,
a man who guides his city on a straight path.
His forebears laboured hard in their hearts
and so won a holy habitation beside the river.
They were the envy of Sicily,
and as time sped them on its destined road
it added wealth and popular favour to crown their inborn talents.

Again, talking about how great the victor and his family are. Note that Theron himself wouldn’t have driven the chariots; rather, my understanding is that his role would’ve been more like that of an owner or trainer of a modern thoroughbred horse, who then hires a jockey to do the actual riding. We also have another mention of “inborn talents,” and references to the gods throughout.

Son of Cronus and Rhea,
you who rule over your home on Olympus,
and over this greatest of games and Alpheus’ stream;
be warmed by my songs and in your kindness
preserve their native land for generations to come.

Praying for his continued good fortune.

But when some deed has been done, right or wrong,
not even Time the father of all things can undo its outcome;
yet with the help of good fortune men may forget it.
Grief dies when confronted by noble joys,
and its enduring bitterness is beaten down
when fortune sent from a god
lifts a man to prosperity’s heights.

The second part of this stanza sounds about like what one would expect from a victory ode, but those first two lines are a bit ominous. They set up what comes next:

This saying fits the royal-throned daughters of Cadmus,
whose sufferings were great;
yet even so, heavy sorrow sinks back
in the face of mightier blessings.
Long-haired Semele died amid the roar of thunder, but she lives on among the Olympian gods,
loved for all time by Pallas and Father Zeus,
and especially loved by her ivy-wearing son.
Ino, too, men say, was granted an immortal’s life
for all time in the depths, along with Nereus’ sea-nymph daughters.

Those familiar with Greek mythology may already see the relevance of Semele and Ino, but Stephen Instone, editor of the Oxford University Press edition, explains, “Cadmus: Semele, mother of Dionysus, who died when Zeus came to her as a flash of lightning, and Ino, who jumped into the sea to escape her mad husband and became a Nereid. The fate of Ino foreshadows the reflections on the afterlife that follow. Their father, Cadmus, was king of Thebes.”

But for mortals death’s final point has not been fixed,
nor even when we shall peacefully conclude our day,
child of the sun, in lasting good fortune.
Streams of pleasure and pain flood over men at different times;
and so it is that Fate, which controls the benevolent destiny
that this family has enjoyed, can bring some suffering
even into their heaven-sent prosperity,
which in time to come may be reversed—
from the time when Laius’ son met his father
and, as had been foretold, killed him,
so fulfilling the oracle delivered long before at Pytho.

“Laius’ son” is Oedipus. This all seems like a downer for a victory ode, but Pindar was fond of these references to myth to emphasise the mortality of the victor and, again, caution against hubris. Skipping ahead to the final stanza, Pindar ties all of these themes together:

Come, my heart, aim your bow at the mark!
Who are we now to strike, as we shoot fame’s arrows
with gentle intent? I bend my bow at Acragas,
proclaiming on oath and with true understanding
that no city in a hundred years has given birth to a man
more generous in spirit to his friends
or more open-handed than Theron.
But praise can soon turn out to be excessive if it is not attended by impartiality,
but comes from the mouths of the disaffected,
who seek with idle chatter to obscure good men’s noble deeds.
As surely as grains of sand are beyond counting,
who could say how many acts of kindness
this man has performed for other men?

That’s all pretty cool, but honestly, each ode is similar enough that by the time I was halfway through them they began feeling a little tedious. Worsening matters, I’m sure, is the issue of translation. I read Oxford University Press’s edition, translated by Anthony Verity. Per OUP policy he says that he stuck close to the original text. That’s good for academic study, but tends to produce dry poetry that does not actually give a reader an idea of what the original is like. That said, it’s not bad, and given that Pindar is notoriously difficult to translate I won’t blame Verity for the dry result.

As fine a job as Verity may have done, though, the fact remains that, as excellent as his work may be in Greek, in English Pindar is a bit of a chore to read. Should you, then, skip Pindar’s odes? As is often the case, it depends on what you want to get from him. If you’re doing an in-depth study of the Classics, then you must read a poet of his stature, though if you’re taking this especially seriously you’ll probably be doing so in Greek. For a more casual reader, though, reading a handful of his poems will probably do. There are anthologies of Greek poetry which include a selection of his work, and that may be your best bet.