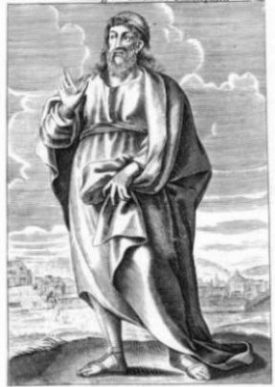 Recall that Socrates will later be charged with corrupting the youth, and encouraging impiety. Yet, apparently there were “men of science,” which I take to be an ironic phrase roughly equivalent to calling the New Atheist twats “brights” or “fedoras,” who spent a good deal of time in trying to explain myths surrounding the gods rationally. Socrates, though, says that he accepts the common beliefs around these myths. That doesn’t mean he has no doubts, of course, but he focuses on other, more important matters first.

This seems to me the best course, since there’s little to gain in attacking these myths from a rationalistic perspective. Most likely, it would serve only to encourage real impiety. If one did decide to criticise these myths, the way to do it would be to criticise the myths themselves for impiety, for portraying the gods as too human and imperfect.

Finally, it’s also interesting that Socrates describes the sceptics’ position as “in the fashion.” I’m curious as to just how popular this scepticism was, but at the least it was apparently an accepted position among high-status people.

So, after crossing the river they find a place to sit, and Phaedrus reads to Socrates  a short treatise written by one Lysias on the subject of love, which feels like it could’ve been one of the speeches in the Symposium. Socrates, being Socrates, isn’t impressed, and the two begin discussing the matter. Again, I’m not terribly interested in the subject, but my ears perked up when I came to this part, where Socrates discusses the nature of the soul:

And now that we have seen that that which is moved by itself is immortal, we shall feel no scruple in affirming that precisely that is the essence and definition of soul, to wit, self-motion. Any body that has an external source of motion is soulless, but a body deriving its motion from a source within itself is animate or besouled, which implies that the nature of soul is what has been said.

And if this last assertion is correct, name that ‘that which moves itself’ is precisely identifiable with soul, it must follow that soul is not born and does not die.

I take it that by “motion” Socrates means something like change, not just physical movement. I want to say moving from potentiality to actuality, but I’m hesitant to impose Medieval, Scholastic terminology on a much earlier work. Nonetheless – isn’t this a prototype of the argument from motion? I expected something along these lines from Aristotle, but didn’t know whether Plato would cover the same ground or not. I certainly didn’t expect something that, at least to my layman’s eye, looks so close. For reference, here’s St. Thomas Aquinas’s formulation of the argument from motion, from the Summa Theologiae, I. Q2. A3., “Whether God exists.”

It’s certainly not exact, and Socrates is talking about soul rather than God, but the basic argument of moving from the observation of motion to the need of a self-mover is there.I’m still not clear on what Socrates believes soul to be, since he’s not using it in its normal sense (i.e., of individuals’ souls, in the plural). Starting at 249a he also begins talking about reincarnation, but I’m not sure how literally to take this part of the discussion. He says, in part, “For a soul does not return to the place whence she came for ten thousand years, since in no lesser time can she regain her wings,” and “Such a soul, if with three revolutions of a thousand years she has thrice chosen this philosophical life,” which is very specific when taken at face value. I assume that the wings are metaphorical, and would guess that the numbers are, as well, but I’m not completely certain.

In any case, this is a bit above my pay grade, even more so than the rest of the dialogues, but the next point I want to address is more concrete. Near the end of the dialogue, Socrates criticises writing.

Yes, writing. References to Socrates’ opposition to writing are scattered here-and-there across the internet, and if you’ve ever wondered where exactly he talks about it, now you know. He tells a myth about the Egyptian god Theuth visiting an Egyptian king, Thamus, and teaching him a variety of arts. When it came to writing, Theuth said that it would promote memory and wisdom, but Thamus politely declines this knowledge, explaining:

If men learn this, it will implant forgetfulness in their souls; they will cease to exercise memory because they rely on that which is written, calling things to remembrance no longer from within themselves, but by means of external marks. What you have discovered is a recipe not for memory, but for reminder. And it is no true wisdom that you offer your disciples, but only its semblance, for by telling them of many things without teaching them you will make them seem to know much, while for the most part they know nothing, and as men filled, not with wisdom, but with the conceit of wisdom, they will be a burden to their fellows.

Socrates then makes a point about writing in general that previously, in Protagoras and Lesser Hippias, he’s applied only to poetry in particular, saying, “[written words] seem to talk to you as though they were intelligent, but if you ask them anything about what they say, from a desire to be instructed, they go on telling you just the same thing forever.” That is, if you’re reading something and would like the author to clarify a point, or want further information about something, you can’t get it. Books can only serve as an author’s monologue.

Now, that problem is reasonable enough, and I think most people would agree that there’s something to them. There certainly is a distinction between “memory” and a “reminder,” and we should be wary of conflating “reading a lot of books” with real wisdom. Socrates then adds this:

And once a thing is put in writing, the composition, whatever it may be, drifts all over the place, getting into the hands not only of those who understand it, but equally of those who have no business with it; it doesn’t know how to address the right people, and not address the wrong. And when it is ill-treated and unfairly abused it always needs its parent to come to its help, being unable to defend or help itself.

This is a more difficult point. People certainly can get themselves into trouble by reading things they can’t understand, or taking away the wrong ideas. For some things, one can look for a curriculum of some kind, but that’s not practical most of the time. However, I think Socrates slightly misses the mark here. Not that he’s wrong, but the problem we see is not that people are reading books they aren’t disposed to understand, but that most people don’t read at all, and if they do, it’s things like Dan Brown or J. K. Rowling novels. I suppose the former is preferable, since a little learning is a dangerous thing, but I see little that can be done about the latter. I spend a lot of time telling people to read more and better books, but the only ones apt to listen to that advice may be those who need it least. It still doesn’t solve the problem of knowing which books, even assuming they’re good, we’re well disposed to read and understand.

Socrates offers dialectic as a solution. I’ll actually agree that discourse with intelligent, amiable people is a better way to gain wisdom than reading. Good luck finding people who fit the bill on that, though. One’s interlocutors must have some level of wisdom and agreeableness, not to mention a good deal of leisure time. Socrates and Phaedrus have each other. I have, at best, a few people on Twitter and one IRL friend who I’d describe as intelligent and agreeable, but time is hard to fine IRL and social media is a poor setting for this sort of thing. Should I just leave off this project, then? That doesn’t seem right, either. So, for the time being, I’m stuck with my books, whether I’m ready for them or not.