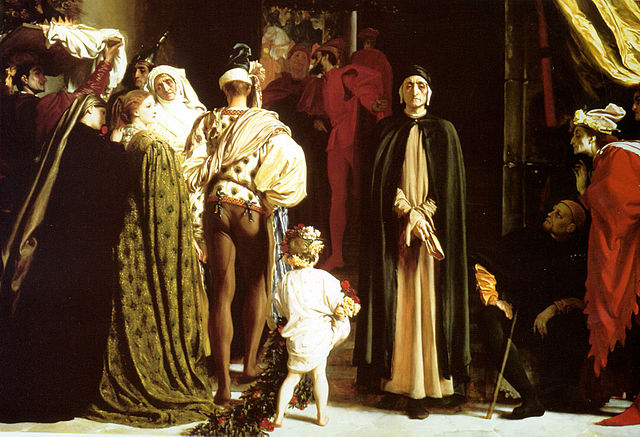 I’ll begin by giving Burnham credit for his main thesis. It’s true that political writing is often indirect, and with a few caveats, that it sometimes will have an “exoteric” and “esoteric” meaning. My objection here is specifically to his use of Monarchia as an example. He begins by summarising each of the three parts that make up the work, then goes through the formal arguments, as follows:

In the first place, we may note that Dante’s ultimate goal (eternal salvation in Heaven) is meaningless since Heaven exists, if at all, outside of space and time, and can therefore have no bearing on political action.

Right away, we hit a major problem. If heaven exists, the implications are enormous. It means that we will be answerable to someone for all of our political actions, that concepts like the Mandate of Heaven or Divine Right of Kings aren’t just propaganda, and so on. I’m sure anyone more creative than James Burnham can think of many other such things.

Burnham stupidly leaves out that the most important consideration for political action is what is the goal. What policies should the state pursue? The answer will vary considerably depending upon the answer. Is it to maximise the personal liberty of the citizens? To expand the economy? To ensure equality in some sense? To guide citizens to the good life? If the sovereign and other political actors are to act according to reason and not merely by divination or at random, they must have a goal in mind. If we are to define a goal for the state, and if we want to be thorough about it, we’re going to need to bring in metaphysics, as Dante does.

I could probably stop there. After all, Burnham already has the most basic point in political science exactly backwards, and the rest of the essay really comes down to whether you consider metaphysics important or not. If so, then Dante’s arguments are worth considering. If not, then they aren’t. Nonetheless, let’s continue.

Second, the lesser goals derived from the ultimate goal – the development of the full potentialities of all men, universal peace, and a single unified world-state – though they are not perhaps inconceivable, are nevertheless altogether utopian and materially impossible.

Again, when considering political actions, we must consider what our goal is. Perfection is impossible in this world, but that does not mean that we cannot pursue the ideal as much as circumstances allow.

I would also point out that Dante probably didn’t expect his vision to ever come to fruition, though he never explicitly says so one way or the other as far as I’m aware. Similarly, he was a Christian and undoubtedly wanted the whole world to be converted, yet he didn’t expect that to come to fruition, either, though he could certainly have put forward arguments for why that would be the best thing for the world.

Third, the many arguments that Dante uses in favor of his position are, from a purely formal point of view, both good and bad, mostly bad; but, from the point of view of actual political conditions in the actual world of space and time and history, they are almost without exception completely irrelevant.

Well, let’s see about that:

They consist of pointless metaphysical and logical distinctions, […]

They are only pointless to the type of person who doesn’t take metaphysics seriously, and who is content with muddled thinking rather than pursuing clarity as much as possible.

I discuss Dante’s various analogies and historical arguments in my commentary; some are valid, others are questionable. It’s not really possible to dismiss or accept all of them off-hand like this.

Which is only invalid if one begins with the assumption that miracles can’t happen.

I don’t know what criteria Dante was supposed to have used to select his authorities, though none stood out to me as merely arbitrary. Like Dante’s other arguments, these should be examined on a case-by-case basis.

In the task of giving us information about how men behave, about the nature and laws of political life, about what steps may be taken in practice to achieve concrete political and social goals, they advance us not a single step.

As is bound to happen if one throws out entire categories of arguments without examination.

Taking the treatise at face value and judging it as a study of politics, it is worthless, totally worthless.

Taking Burnham’s analysis of the treatise at face value and judging it as a study of politics, it is worthless, totally worthless.

Burnham then turns to the historical context of Monarchia. It is important to know some of this background, and both editions of the work that I own cover it in the introduction, though not as uncharitably as Burnham does, fortunately. After describing how Dante came to be part of the Emperor’s party in Italy’s factional strife, he offers an astonishing conclusion: though formally Dante argues in favour of the authority of the Holy Roman Emperor, in reality he’s arguing for the authority of the Holy Roman Emperor!

When I first read through Burnham’s essay, I admit that I braced myself when I saw he was ready to dive into the “real” meaning of the work. I was expecting him to say that Dante didn’t really mean what he’d just spent a whole book arguing for. However, he caught me totally off-guard, as he stood looking like a detective bragging for having cracked a difficult case, after the prime suspect has already confessed. I suspect that anyone likely to have an interest in Monarchia in the first place and who knows something about Dante’s biography (again, as typically covered by the introductions to Dante’s work) will probably assume that Dante’s circumstances contributed to the arguments he chooses to make, and how he presents them.

As another analogy, let’s say we come across a man promoting a particular method for dieting, for which he’s written a book or offers a newletter. He certainly has an ulterior motive for promoting this, because he’ll gain financially if people buy his product. Does this mean that we should approach his arguments with some scepticism? Sure, that would indeed be prudent. Does this mean that we should throw out his arguments in favour of his diet altogether? Of course not. His arguments may be good or bad, but the only way to know for certain is to examine the arguments. It’s not really a matter of exoteric or esoteric readings of his dieting advice. Of course, there’s also the possibility that he developed his method out of a genuine concern for public health (though, upon further reflection, health concerns the telos of diet, and is thus a metaphysical concern; therefore any arguments that approach nutrition from that starting-point should be disregarded, just as political arguments that begin by considering the telos of politics should be disregarded).

Similarly, that Dante stood to benefit alongside the Emperor isn’t a matter of esoteric reading, nor does it mean he didn’t genuinely believe his own arguments. It just means that we should be aware of this background, and remind ourselves not to accept every and any argument we come across, but always to consider each point on its merits.

Finally, one may also wonder what Burnham’s real purpose in writing The Machiavellians was, as some of the commentators at Unqualified Reservations do. I’ll leave that exercise, though, to those more familiar with Burnham’s life and times.

So, though I welcome my anonymous friend’s question, since I’m sure he wasn’t the only one wondering about this, I have to say that I’m glad I left Burnham’s essay entirely out of my commentary. Monarchia remains an interesting work, with its merits and, admittedly, flaws, but still well worthy of consideration. To steal a line from a far better post on Unqualified Reservations, Dante deserves a better class of critics.

3 thoughts on “Against James Burnham’s Interpretation of Dante”