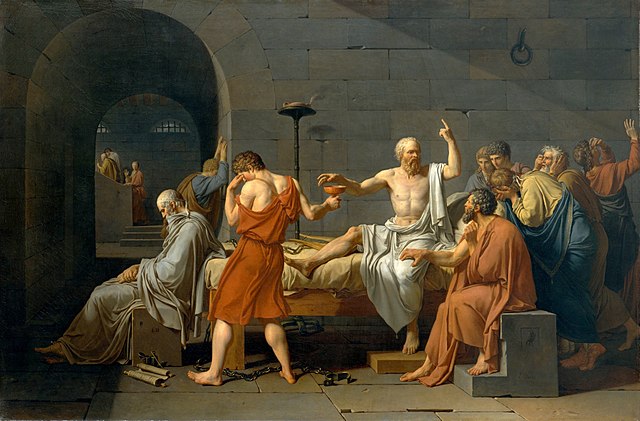 After this, the topic of suicide comes up. Based on a comment in Crito on life not always being worth living, at least physically, I’d assumed that Socrates supported suicide in at least some circumstances. However, here he presents an argument against it. He refers to an analogy told by certain mystics that we are, in a sense, in charge of a guard post which we are not to abandon, then adds:

I believe that this much is true, that the gods are our keepers, and we men are one of their possessions. Don’t you think so?

Then take your own case. If one of your possessions were to destroy itself without intimation from you that you wanted it to die, wouldn’t you be angry with it and punish it, if you had any means of doing so?

So if you look at it in this way I suppose it is not unreasonable to say that we must not put an end to ourselves until God sends some compulsion like the one which we are facing now.

Exactly so. Of course, Socrates himself will die by committing suicide, but only under compulsion from the State. I don’t think this would be permissible under Christian doctrine, but it is clearly a different scenario than, say, a desperate man deciding on his own to jump off a bridge.

Oh, and this will probably be the last time I mention this, but we have here another example of Socrates presenting a positive argument of what he himself believes. From now on, I’ll feel quite confident in telling those who accuse him of only tearing down others’ beliefs to go back and read the dialogues again.

We then move on to the main topic of the dialogue, the nature of the soul. Much of this is dedicated to proving the immortality of the soul, but I don’t believe I can do this discussion justice in a short blog post, so I’ll focus on just one theme, which is the relationship between the soul and body regarding the afterlife. As I understand Socrates here, virtue and wisdom, and then happiness after death, come from what we would call mortification, but essentially in focusing our efforts on immaterial things and avoiding pursuing bodily comforts. Those overly attached to worldly pleasures will not ultimately be able to attain happiness. Socrates says:

Because every pleasure or pain has a sort of rivet with which it fastens the soul to the body and pins it down and makes it corporeal, accepting as true whatever the body certifies. The result of agreeing with the body and finding pleasure in the same things is, I imagine, that it cannot help becoming like it in character and training, so that it can never get entirely away to the unseen world, but is always saturated with the body when it sets out, and so soon falls back again into another body, where it takes root and grows. Consequently it is excluded from all fellowship with the pure and uniform and divine.

What happens when we are not tied to bodily pleasures? Socrates explains a little before that passage:

But the soul, the invisible part [of a person], which goes away to a place that is, like itself, pure, and invisible – the true Hades or unseen world – into the presence of the good and wise God, where, if God so wills, my soul must shortly go – will it, if its very nature is such as I have described, be dispersed and destroyed at the moment of its release from the body, as is the popular view? Far from it, my dear Simmias and Cebes. The truth is more like this. If at its release the soul is pure and carries with it no contamination of the body, because it has never willingly associated with it in life, but has shunned it and kept itself separate as its regular practice – in other words, if it has pursued philosophy in the right way and really practiced how to face death easily – this is what ‘practicing death’ means, isn’t it?

It’s not totally clear to me what Socrates means here by “God,” but I gather that his idea of God is something above the Greek pantheon, has a will, and whose company is the soul’s proper end. He says later that good souls, after death, “live thereafter altogether without bodies, and reach habitations even more beautiful, which it is not easy to portray.” As for the wicked:

I suppose, if at the time of its release the soul is tainted and impure, because it has always associated with the body and cared for it and loved it, and has been so beguiled by the body and its passions and pleasures that nothing seems real to it but those physical things which can be touched and seen and eaten and drunk and used for sexual enjoyment, and if it is accustomed to hate and fear and avoid what is invisible and hidden from our eyes, but intelligible and comprehensible by philosophy – if the soul is in this state, do you think that it will escape independent and uncontaminated?

That would be quite impossible, [Cebes] said.

[…] So the soul which is tainted by its presence is weighed down and dragged back into the visible world, through fear, as they say, of Hades or the invisible[.]

Socrates goes into more detail on these things later, but there is one more thing worth quoting. What of people who are sinful, but repent at some point? After discussing the fate of the wholly good or bad, he says:

Others are judged to have been guilty of sins which, though great, are curable – if, for example, they have offered violence to father or mother in a fit of passion, but spent the rest of their lives in penitence, or if they have committed manslaughter in the same fashion. These too must be cast into Tartarus, but when this has been done and they have remained down there for a year, the surge casts them out – the manslayers down Cocytus and the offenders against their parents down Pyriphlegethon. And when, as they are swept along, they come past the Acherusian Lake, there they cry aloud and call upon those whom they have killed or misused, and calling, beg and entreat for leave to pass from the stream into the lake, and be received by them. If they prevail, they come out and there is an end of their distress, but if not, they are swept away once more into Tartarus and from there back into the rivers, and find no release from their sufferings until they prevail upon those whom they have wronged, for this is the punishment which their judge has appointed for them.

Huh, so if sinners repent they can still gain entrance to happiness through penance and prayer, even after they’ve already died. Sounds like a crude version of something else, but I can’t quite put my finger on it.

Anyway, Socrates then adds that this may not be exactly what happens in the afterlife, but based on their earlier conclusions about the nature of the soul, this or something like it must be true. Regardless, “a man can be free from all anxiety about the fate of his soul – if in life he has abandoned bodily pleasures and adornments, as foreign to his purpose and likely to do more harm than good, and has devoted himself to the pleasures of acquiring knowledge, and so by decking his soul not with a borrowed beauty but with its own – with self-control, and goodness, and courage, and liberality, and truth.”

With this, the discussion ends, and Socrates prepares to drink the hemlock. First, he bathes, he says to save the women the trouble of cleaning his body after death, but it’s hard to avoid seeing a metaphorical as well as literal cleanliness and purity from this action. Then, his thoughts turn to the divine; after he’s given the cup of poison, he asks if it would be acceptable to pour some out as a libation. It’s not, since he was only given a normal dose, so he simply offers a verbal prayer that his passing into the next life be prosperous. As the poison took effect, he spoke his last words to Crito, “we ought to offer a cock to Asclepius. See to it, and don’t forget.” Edith Hamilton and Huntington Cairns, in their introduction to the dialogue, note that it was customary to make an offering to the divine healer after recovering from an illness.

Phaedo concludes, “Such Echecrates, was the end of our comrade, who was, we may fairly say, of all those whom we knew in our time, the bravest and also the wisest and most upright man.” He certainly was an extraordinary man, and fortunately for us, we still have several more dialogues in which to spend more time with him. Next up is Cratylus.