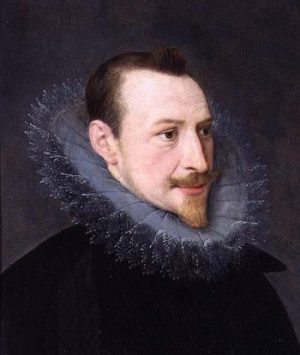 No, I didn’t forget about my goal of making a hundred friends by memorising their poems. I just took a break to reconsider the feasibility of this project, but have decided to go forward.

So, today we meet Edmund Spenser. You know Mr. Spenser, right? He was born in 1552 or 1553, the son of a journeyman clothmaker, went to Pembroke College but required financial assistance to do so (apparently, doing menial work for the college), and as an adult spent much of his career as a government official in Ireland. He became well-known in his own time, though, for his poetry and especially for his epic, The Faerie Queene.

For this post, though, I memorised one of his sonnets from the series Amoretti, which he wrote while wooing his future wife Elizabeth Boyle. This is the seventy-fifth, “One Day I Wrote her Name.”

One day I wrote her name upon the strand,
But came the waves and washed it away:
Again I wrote it with a second hand,
But came the tide, and made my pains his prey.
“Vain man,” said she, “that dost in vain assay,
A mortal thing so to immortalize;
For I myself shall like to this decay,
And eke my name be wiped out likewise.”
“Not so,” (quod I) “let baser things devise
To die in dust, but you shall live by fame:
My verse your vertues rare shall eternize,
And in the heavens write your glorious name:
Where whenas death shall all the world subdue,
Our love shall live, and later life renew.”

What I like about this poem is that it could’ve ended after the second quatrain, possibly with a final couplet on eternal life, similar to John Donne’s “Death, Be Not Proud.” Mr. Spenser does allude to the world to come at the very end, “and later life renew,” but he’s more ambitious than that and promises that their love will last forever with his poetry. That sounds rather proud, but here we are over 400 years later talking about him and Elizabeth, so one can’t say he didn’t fulfil his promise there.

Should I also say something about the form? I haven’t really discussed the technical side of these poems so far because the subject is a bit dry and scares people off, but I suppose I should do so at some point. This is, of course, a sonnet, but specifically a Spenserian sonnet, named after our friend here. The most important point here is the rhyme scheme, and how the structure determines the development of the poem. Notice that the rhymes knit the quatrains together, but the final couplet is set apart – abab bcbc cdcd ee. Each quatrain takes the central idea, develops it, and then uses the couplet as a conclusion. Take a look at Donne’s sonnet, and you’ll see it’s put together similarly; the rhyme scheme in the quatrains is different, but they’re still tied together with the couplet as a final turn or conclusion. Since the most famous sonnets in English, William Shakespeare’s, also use this turn at the end, it’s easy to think of this as the standard, but there are exceptions. The Italian sonnet, which is actually the older form, divides the poem into two sections – the first of eight lines, the second of six. Let’s revisit John Milton’s take on this form from “When I Consider how My Light is Spent.” (I’ve added a line break to make the structure clearer).

When I consider how my light is spent
Ere half my days in this dark world and wide,
And that one talent which is death to hide
Lodg’d with me useless, though my soul more bent
To serve therewith my Maker, and present
My true account, lest he returning chide,
“Doth God exact day-labour, light denied?”
I fondly ask. But Patience, to prevent

That murmur, soon replies: “God doth not need
Either man’s work or his own gifts: who best
Bear his mild yoke, they serve him best. His state
Is kingly; thousands at his bidding speed
And post o’er land and ocean without rest:
They also serve who only stand and wait.”

Here, rather than dragging us along and waiting until the last two lines for the stunning conclusion, Milton spends the first octave introducing and considering the poem’s question, then the sextet to give an answer. It’s not as snappy as “Where whenas death shall all the world subdue, / Our love shall live, and later life renew,” or “One short sleep past, we wake eternally, / And death shall be no more; Death, thou shalt die,” but it allows for a more thorough and, I think, satisfying meditation on the poem’s subject. Milton also turns in the middle of a sentence, which I find a little awkward, but of course he’s the celebrated poet and I’m not.

In any case, this is just a brief, not-overly-technical introduction. For anyone wanting more, don’t worry – we’ll revisit this sometime in the next ninety-one poems.