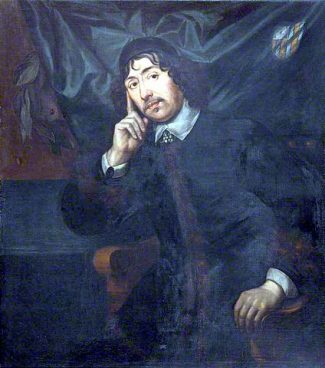 I admit I’m not very familiar with today’s friend, James Shirley, except for the general knowledge that he’s a celebrated playwright, and wrote in the first half of the 17th Century. My only experience with his work are the poems and excerpts from my collection of the Cavalier poets, but his inclusion in that anthology is a good sign that he’s worth getting to know better. He was apparently a Catholic convert, and a supporter of the Royalist side in the English Civil War (though apparently he left the field and went to London when the tide began to turn against the King). Needless to say, his career as a dramatist came to an end under the Commonwealth, and he supported himself by teaching and writing educational work until his death in the Great Fire of London in 1666.

This poem, “The Glories of our Blood and State,” is actually an excerpt from his play The Contention of Ajax and Ulysses. I know I encountered this play in high school, though it may have been just this poem, since it may be his most famous.

The glories of our blood and state
Are shadows, not substantial things;
There is no armour against fate;
Death lays his icy hand on kings.
Sceptre and crown
Must tumble down,
And in the dust be equal made
With the poor crooked scythe and spade.

Some men with swords may reap the field,
And plant fresh laurels where they kill;
But their strong nerves at last must yield,
They tame but one another still.
Early or late,
They stoop to fate,
And must give up their murmuring breath,
When they, pale captives, creep to death.

The garlands wither on your brow,
Then boast no more your mighty deeds;
Upon death’s purple altar now,
See where the victor-victim bleeds.
Your heads must come
To the cold tomb;
Only the actions of the just
Smell sweet and blossom in their dust.

I don’t think this requires a lot of explication, but I seem to be drawn to these poems about impermanence. The theme is much the same as “Kingdomes are but Cares,” though it does have one note of optimism regarding the “actions of the just.” I will say that the couplets in the fifth and sixth lines of each stanza made memorising this a little more difficult, since they’re a sudden change the metre and the abab rhyme scheme set up in the first four lines. I suppose not every poem can be as easy to memorise as a simple sonnet.