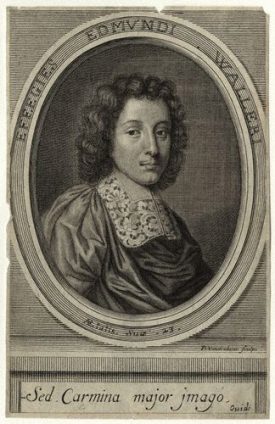 With the Elizabethans, for instance, we had Shakespeare, Spenser, and Marlowe. Among the “Tribe of Ben” and the Cavaliers more broadly we had, of course, Ben Jonson himself, Robert Herrick, Richard Lovelace, and Thomas Carew. More broadly, their contemporaries include such luminaries as John Donne, John Milton, and James Shirley. Not coincidentally, this was also the era that produced the King James Bible, by far the most enduring translation of Scripture, and deservedly so (but don’t tell the Protestants I said that).

In any case, back to Mr. Waller, who lived from 1606-1687. My impression is that he was something of a moderate, as he was a proponent of religious toleration while in Parliament, but ultimately did support the King when the Civil War broke out and he remained in London to argue for his cause. However, he became involved in a conspiracy in 1643 to give the city over to the Royalists. Unfortunatley, the plot was exposed and he was arrested, so he recanted his views and paid bribes to escape execution. After being held in the Tower of London for a year he was fined and exiled for several years. He was able to return to England in 1655, wrote a poem in support of Cromwell, and after the Restoration in 1660 wrote another poem in support of Charles II.

I won’t cast stones, I suppose, since I haven’t walked a mile in his shoes, but I doubt someone like our old friend James Graham would’ve been very impressed.

Fortunately, his poetic output was stronger than his politics, and today’s poem, “Go, Lovely Rose,” is probably his most famous.

Go lovely rose,
Tell her that wastes her time and me,
That now she knows,
When I resemble her to thee,
How sweet and fair she seems to be.

Tell her that’s young,
And shuns to have her graces spied,
That hadst thou sprung
In deserts, where no men abide,
Thou must have uncommended died.

Small is the worth
Of beauty from the light retir’d:
Bid her come forth,
Suffer herself to be desir’d,
And not blush so to be admir’d.

Then die, that she
The common fate of all things rare
May read in thee;
How small a part of time they share
That are so wondrous sweet and fair.

This is classic stuff in both style and subject matter. The metre and rhyme scheme are consistent but not monotonous, which I especially appreciate since I had to memorise it. As I mentioned above, when you think of English poetry it’s exactly this sort of thing that comes to mind first. Comparing a beautiful woman to a rose wasn’t exactly groundbreaking even then, but Mr. Waller nails the execution. I don’t think the poem requires a lot of explication so I’ll leave it here and let the poem suffer itself to be admired.