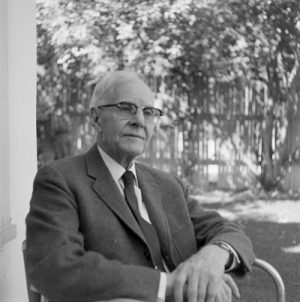 But now go the bells, and we are ready,
In one house we are sternly stopped
To say we are vexed at her brown study,
Lying so primly propped.

One interesting thing about this poem is that, though we can gather that we’re at this girl’s funeral, Mr. Ransom never explicitly says so. In fact, without the surrounding context most of the poem is rather cheery; he starts by telling us about her having “such speed in her little body, / And such lightness in her footfall,” which sounds graceful, despite the ominous past tense. Then, a couple lines to contrast that grace with her “brown study” and the attendees’ reaction.

Then, Mr. Ransom immediately moves on to a charming and somewhat comical description of the girl making war against her shadow and a flock of geese (who probably deserve it, by the way; geese are mean bastards). These three stanzas are all pretty serious-sounding, or would be if it weren’t about a child and geese. “Bruited” is an uncommon and formal word, and “high window” instead of just a “living room window” or something makes it sound like this was happening in someplace like a palace or church; “took arms” is also formal, like Virgil singing of “Arms and a man,” and the geese cry “Alas!” like they’re in an old ballad. I like the colour imagery of “snow on the green grass,” and the pastoral sound of “noon apple-dreams.”

So, those three middle stanzas would be rather pleasant if they stood on their own, but we get that contrast in the fourth stanza with the sound of the bells and her brown study again. Presumably “we are ready” now, yet two lines later we’re “vexed” again. Basically, the funeral attendees start by thinking of the girl as she was when she was alive, but seeing her dead “Astonishes us all.” So, they comfort themselves by thinking back to her childhood adventures, feel ready, but then the sight of this apparently rambunctious girl now lying dead brings them right back to feeling vexed.

Which, I think, is very commonly how people feel when attending a wake or funeral. We first think of how the person was when he was alive, but then feel disturbed by the sight of the body. We may turn away and speak to other attendees, sharing memories of our friend or relative, which raises our spirits somewhat, only to be brought low again by the sight of the departed.

In any case, I actually memorised this poem a few years ago, and it’s one of my favourites. I’ll also mention that one thing I like about Mr. Ransom is that he sounds like a Southerner. The University of Arizona has a recording of him speaking and reciting this and other poems. This is just a personal note, but his manner of speaking reminds me of my grandfather, and in my experience not many people speak this way anymore, certainly not many young people, which is almost a sad an observation as Mr. Ransom’s poem.