I’ve written about today’s friend, Mr. Ezra Pound, a few times before, including addressing his war literature, a very short poem, and a brief reflection on his birthday. In literary terms, he’s a strong contender for the most accomplished friend we’ll meet during this whole series, as he was a great poet, a skilled though idiosyncratic translator, a thoughtful and opinionated critic, and an editor with a knack for finding and fostering talented writers. Because of all that he may be, apart from the Bard himself, the most important poet in English. His reputation suffered because of his support for Benito Mussolini, but I feel confident predicting that in a few centuries Mussolini will be a footnote to the Cantos, much as many great and powerful men are now footnotes to the Divine Comedy. 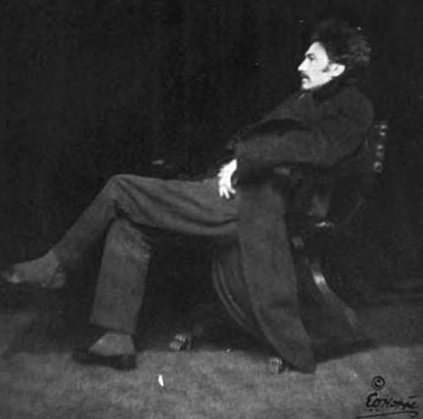 Now, when I said that Mr. Pound was opinionated, that was an understatement. One can’t go a page in his prose, letters, or poetry without him serving up a hot take on one of his fellow poets, past or present, never pulling a punch either in praise or blame. This 1916 poem, “A Pact,” is one that I memorised several years ago, and it’s about that great American Walt Whitman.

I make a pact with you, Walt Whitman—
I have detested you long enough.
I come to you as a grown child
Who has had a pig-headed father;
I am old enough now to make friends.
It was you that broke the new wood,
Now is a time for carving.
We have one sap and one root—
Let there be commerce between us.

So, Mr. Pound didn’t like Whitman’s poetry but, apparently, came around and found a new appreciation for him, right? It’s pretty common, after all, to appreciate an author more after multiple readings, or noticing something new about his work.

Unfortunately, it seems that Mr. Pound’s appreciation here isn’t so much for Whitman’s poetry as for his role in American literature. In 1909, several years before this poem was published, he wrote an article called “What I Feel About Walt Whitman.” He says, in part:

I see him [as] America’s poet. The only Poet before the artists of the Carmen-Hovey period, or better, the only one of the conventionally recognised ‘American Poets’ who is worth reading.

He is America. His crudity is an exceeding great stench, but it is America. He is the hollow place in the rock that echoes with his time. He does ‘chant the crucial stage’ and he is the ‘voice triumphant.’ He is disgusting. He is an exceedingly nauseating pill, but he accomplished his mission.

This is a fine example of a backhanded compliment! He continues:

I honour him for he prophesied me while I can only recognise him as a forebear of whom I ought to be proud.

I am (in common with every educated man) an heir of the ages and I demand my birth-right. Yet if Whitman represented his time in language acceptable to one accustomed to my standard of intellectual-artistic living he would belie his time and nation. And yet I am but one of his “ages and ages’ encrustations” or to be exact an encrustation of the next age. The vital part of my message, taken from the sap and fibre of America, is the same as his.

Mentally I am a Walt Whitman who has learned to wear a collar and a dress shirt (although at times inimical to both). Personally I might be very glad to conceal my relationship to my spiritual father and brag about my more congenial ancestry—Dante, Shakespeare, Theocritus, Villon, but the descent is a bit difficult to establish. And, to be frank, Whitman is to my fatherland (Patriam quam odi et amo for no uncertain reasons) what Dante is to Italy and I at my best can only be a strife for a renaissance in America of all the lost or temporarily mislaid beauty, truth, valour, glory of Greece, Italy, England and all the rest of it.

The article isn’t long so go ahead and read the whole thing, but I think this gets his point across. Mr. Pound isn’t exactly a fan, but he personified American poetry and set the tone of our literature as no one else has, and prickly as he is Mr. Pound does give credit where it’s due.

He returned to this subject years later, in his 1934 book ABC of Reading, and it’s worth sharing his slightly revised thoughts.

From an examination of Walt made twelve years ago the present writer carried away the impression that there are thirty well-written pages of Whitman; he is now unable to find them.

He just couldn’t help himself, could he? Well, he does lighten up a little bit as he continues:

Whitman’s faults are superficial, he does convey an image of his time, he has written histoire morale, as Montaigne wrote the history of his epoch. You can learn more of nineteenth-century America from Whitman than from any of the writers who either refrained from perceiving, or limited their record to what they had been taught to consider suitable literary expression. The only way to enjoy Whitman thoroughly is to concentrate on his fundamental meaning. If you insist, however, on dissecting his language you will probably find that it is wrong NOT because he broke all of what were considered in his day ‘the rules’ but because he is spasmodically conforming to this, that or the other; sporadically dragging in a bit of ‘regular’ metre, using a bit of literary language, and putting his adjectives where, in the spoken tongue, they are not. His real writing occurs when he gets free of all this barbed wire.

Certainly the last author to be tried in a classroom.

I should point out that Mr. Pound prizes observation very highly, so when he talks about how much one can learn from Whitman about his era, that is a genuine compliment even though it’s hard to tell.

As for Whitman himself, we’ll give him a visit and perhaps make a pact of our own with him next time.