“I didn’t die,” she tells them. “I’ve merely abandoned the flesh…. Do you understand? It’s okay if you can’t right now. You will all understand soon. Everyone will. God is here.” 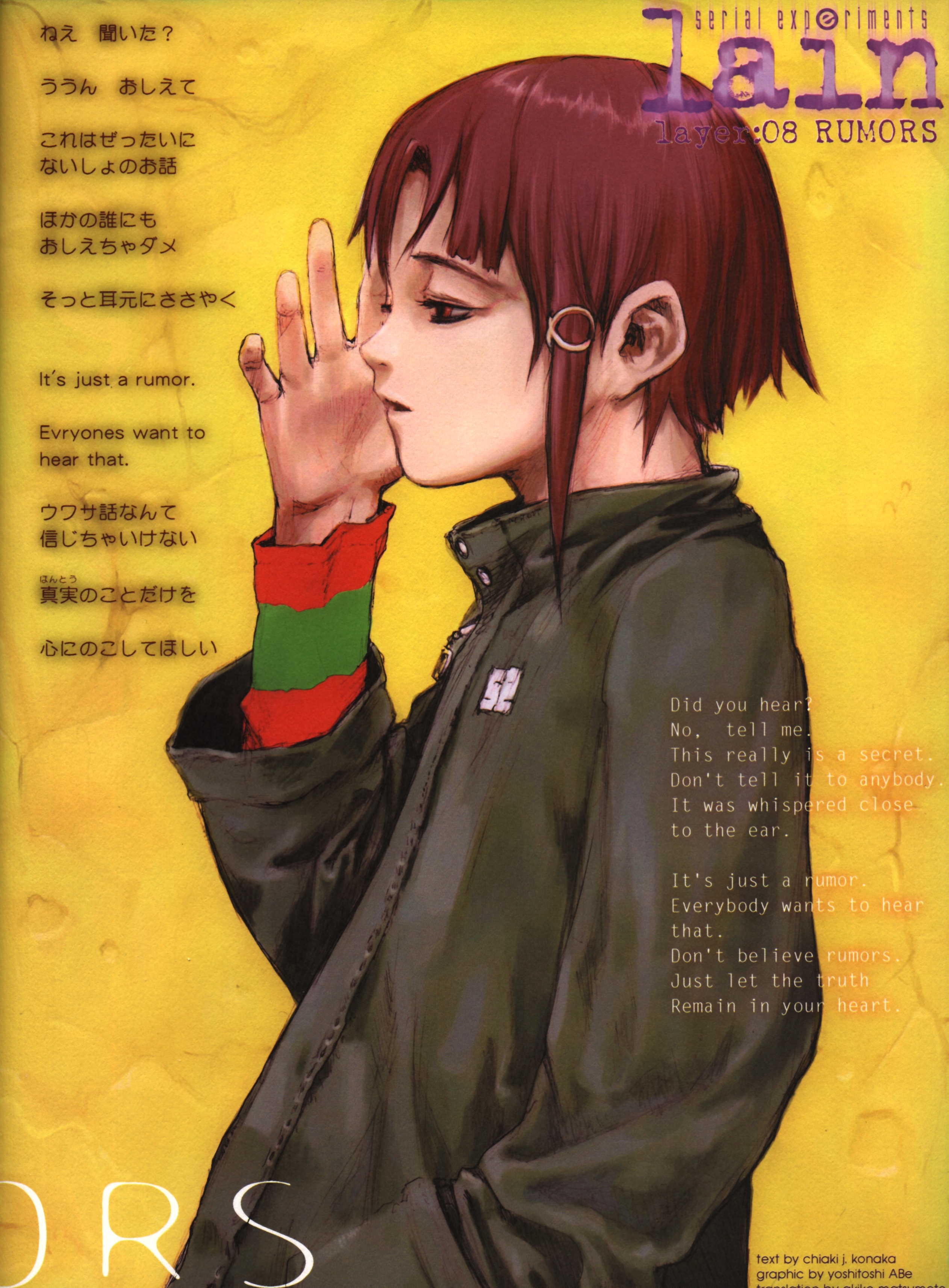 So begins serial experiments lain, which debuted on Japanese television on this day in 1998. I first saw the anime back in 2004 and have rewatched it many times since then; every time I revisit lain I fear that I’ll start noticing more shortcomings, that the novelty of this strange series will wear off, that it’ll be overshadowed by something else – yet, that’s never happened. I gave it another viewing to prepare for its twentieth anniversary, and I still admire it.

Oh, it’s not perfect by any means, and I can understand why other people may not enjoy it. As I said when reviewing Funimation’s blu-ray release, one can tell that it wasn’t a particularly high budget production, its numerous red herrings and unusual storytelling style make it difficult to follow, and it’s topped with an ending that, while not a total downer, isn’t exactly the cheeriest, either.

Honestly, though, those things don’t bother me much. I prefer an ambitious “noble failure” over a perfect execution of something safe and would be willing to forgive lain’s flaws even if they were significantly more serious than they actually are. I’ve written about he show’s appeal, for me especially, previously, and if you’re new to lain I’d highly recommend reading that post before continuing on. This series of posts will be something of a blogging experiment where I put my money where my mouth is. In that previous post, I said that lain can withstand more analysis than just about anything else I’ve seen in popular culture. What I’d like to do now is put that to the test and go through and analyse it pretty much as I would a work of serious literature. 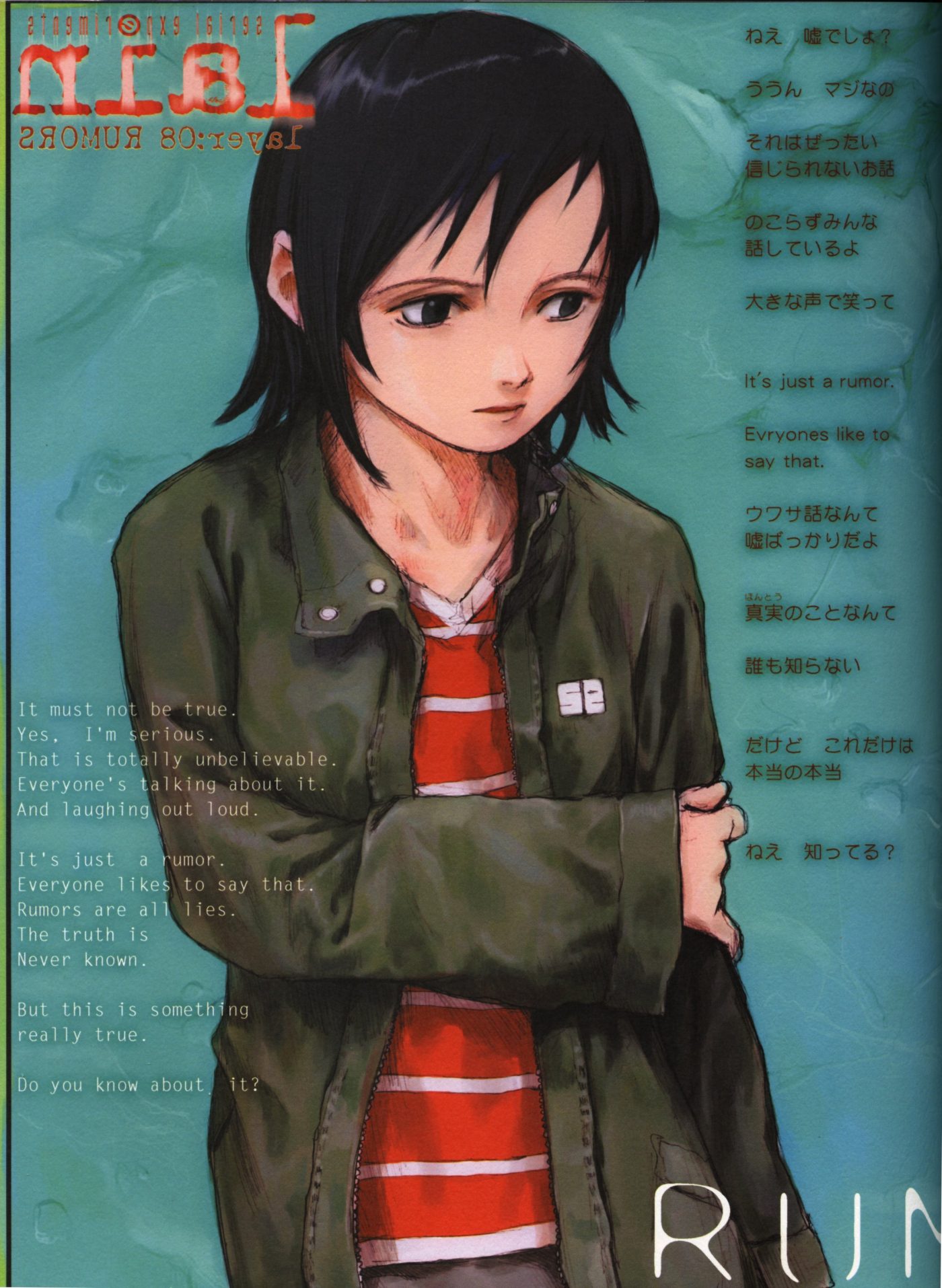 I should pause here with a brief disclaimer. I do distinguish between high and low art, but as with the Wired and the real world, the barrier between the two isn’t always clear. Lain’s medium places it within the realm of popular culture, but even though it doesn’t reach the heights of the literary canon it does take itself seriously and, beyond trying to entertain the audience, makes a competent attempt at discussing high-minded ideas within an aesthetically beautiful package. Since lain’s staff put in the effort and ask to be taken seriously, it’s only fair to approach charitably and see whether or not the show’s creators succeeded or failed not just in comparison to other anime, but on their own terms. There are several ways I considered doing this, but I’ve settled on the simplest – I’ll go through episode-by-episode, week-by-week. I’ll review each episode and discuss how it tells its story, develops its themes and characters, and occasionally go on a tangent to cover various issues it raises regarding things like digital culture and how they apply to the real world. On some posts I’ll also cover other lain-related topics, like other projects the show’s creators have worked on, lain books, and so on.

For those concerned that Everything is Oll Korrect! will morph back into an aniblog for thirteen weeks, don’t worry. Most weeks will have more typical reviews in addition to this episodic commentary.

For those who do stick around, though, I hope you’ll enjoy reading these as much as I’ve enjoyed writing them. Continue on to close the world, open the next.

So, as I said, the way I think I’ll do this is to go through episode-by-episode. I’ll begin with a brief synopsis, but keep in mind that I’m assuming you’ve seen the series, so this will mostly be to refresh your memory and provide a context for what follows. Then, I’ll offer a few comments on the episode’s highlights, discuss how lain develops its story and characters, and try to explain difficult or confusing points. If you’re watching this show for the first time and want to follow along with this commentary on a per-episode basis, be aware that I do occasionally refer to events from later episodes than the one under immediate discussion. Not too often, but often enough that if you’re cautious about spoilers you may want to finish the whole series and then come back.

Almost every episode begins in essentially the same way. First, a narrator tells us when the story takes place:

“Present day… Present time” – followed by a laugh. Then, a shot of Lain with a lot of static.

After that, the opening credits, then some nighttime shots of Tokyo with a voice-over, and finally, a title card. More on all this in a moment. In this episode, we get Yomada Chisa’s suicide and her e-mail to her classmates. Lain also takes up her initial interest in computers and asks her father for a new Navi.

Much of the episode is rather abstract. Lain, and only Lain, hears voices on the train, we see her walking to school with spots of light in the shadows, bleeding power lines, visions of Chisa and a girl stepping in front of a train, and smoke rising from Lain’s fingers during class. At the end of this and every episode, we see the message “to Be continued…” followed by the end credits, and then a “Device” segment (note, though, that Geneon’s release places the Devices in the special features and only plays them at the end of each DVD, while Funimation’s excludes them altogether!). 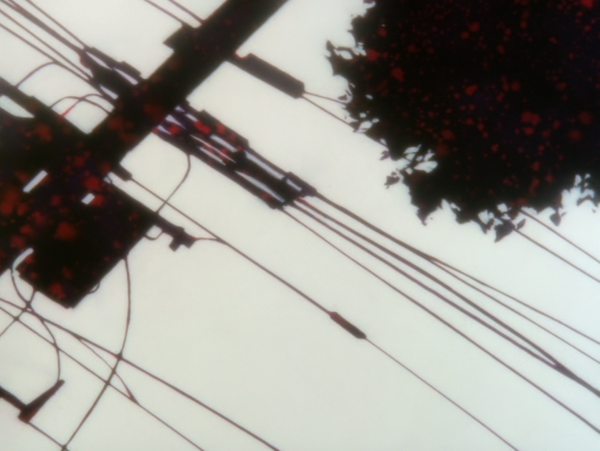 So, what’s going on here? To begin, I think we should point out that serial experiments lain has a few basic storytelling methods. First is your basic dialogue or action scene, like in any other story where characters talk about this or that and doing something that moves the plot forward. In Layer 01, Lain’s conversations with her classmates and father, and Chisa throwing herself off a building are examples. A second is through visions, where there’s typically little or no dialogue, but which consist of more-or-less abstract visuals. Think of the train nightmare and Lain’s smoky fingers in this episode. Third is the good old-fashioned infodump, which we won’t see until the next episode. This overlaps somewhat with the first method, since lain includes a lot of exposition as well as documentary-style sequences. We’ll talk about this more as we go on, though. 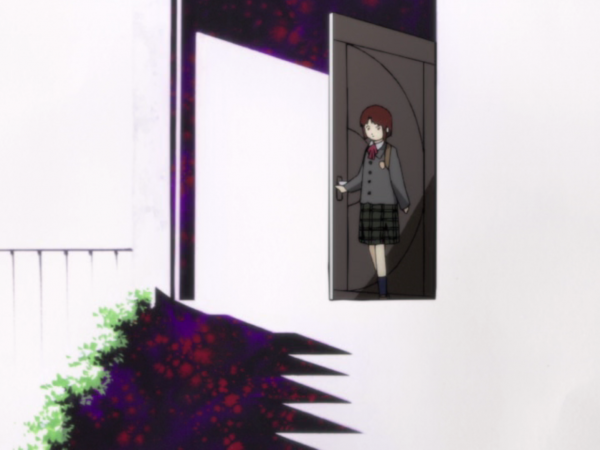 This storytelling style makes lain unusual in that it will have one scene where nothing really happens, it just shows us something weird and that’s about it. Then, in the next scene a narrator will spend a couple of minutes explaining, say, who Vannevar Bush or John C. Lilly were. Obviously, many works of fiction will mix slower moments with segments of expository dialogue, but I’m unaware of any that do it in quite the same way lain does. The closest might be Texhnolyze, which had many of the same staff as lain, including writer Konaka Chiaki.

So, a couple of questions present themselves regarding the “nightmare” segments. First, what purpose do they serve? Second, what are they – hallucinations, subjective point of view sequences, intrusions from the Wired…? I believe that most of them are visions of the Wired invading the real world, as will become more clear (well, relatively clear) as the series goes on. 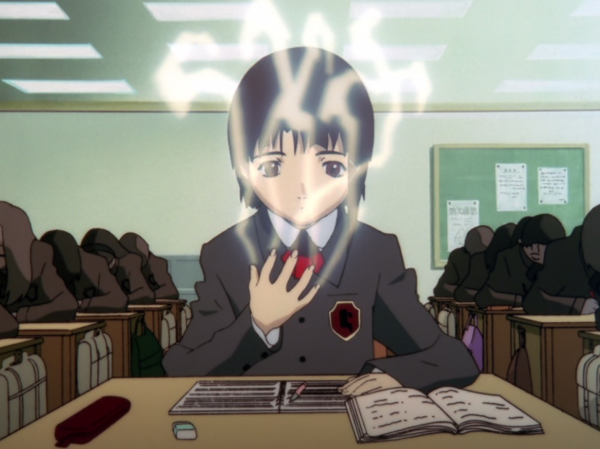 As for their purpose, they do a few things. One, of course, is mood-setting. Much of lain has the feel of a horror film because of these strange, unsettling visions like an old-fashioned chiller. That we’re never quite sure what they are makes them all the more frightening, and they can also reinforce earlier scenes.

For example, in the first major scene of this episode Chisa commits suicide. Later, Lain is on a train when it suddenly stops due to an accident. Because of Chisa, we may assume that the accident is actually a suicide, especially because of the blood dripping from power cables. This is then further reinforced by the vision of the girl stepping in front of a train in Lain’s vision, so the vision complements the main narrative. 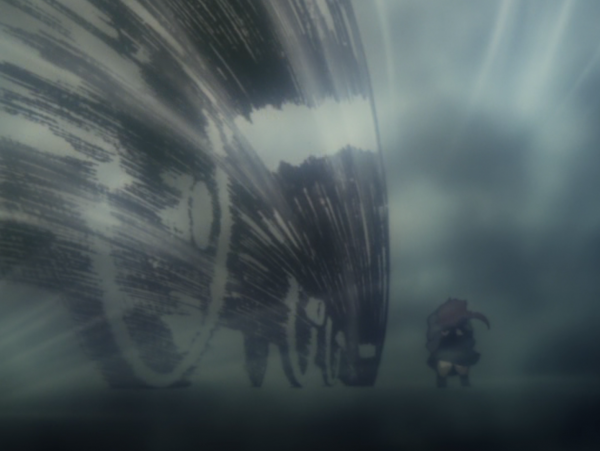 The rest of the visual effects also serve to get across the idea that the Wired is omnipresent. Lain is famous for its frequent shots of power lines and utility poles and the accompanying hum of electricity, which constantly remind of us of how connected everyone and everything is in this world. The spots in the shadows along the street don’t have a clear meaning, but again – they’re everywhere and presumably have something to do with the Wired, and the voices that Lain hears on the train serve a similar purpose. 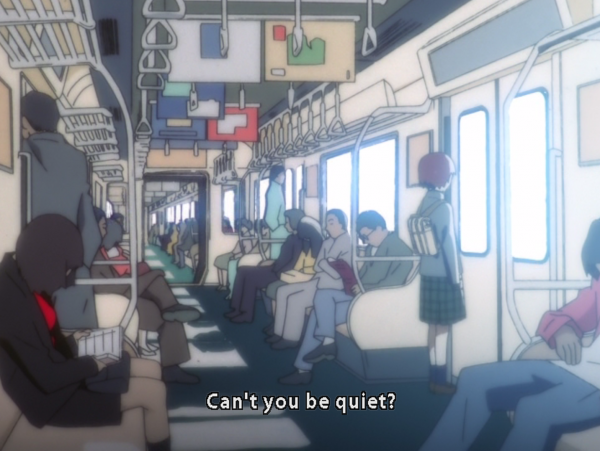 Another motif for this episode is the invitation. The shots of Tokyo that open the episode include a woman asking “Why won’t you come?” Chisa presents an invitation to the Wired in her e-mail, as does the message that appears on the classroom chalkboard. Lain accepts that invitation by asking her father for a new Navi, and we in the audience accept it, as well, by moving on to the next episode. 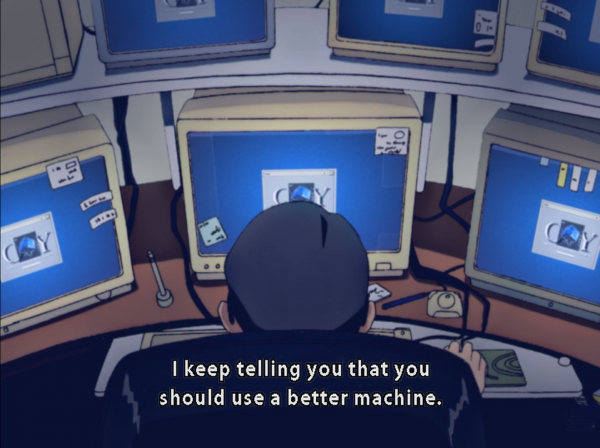 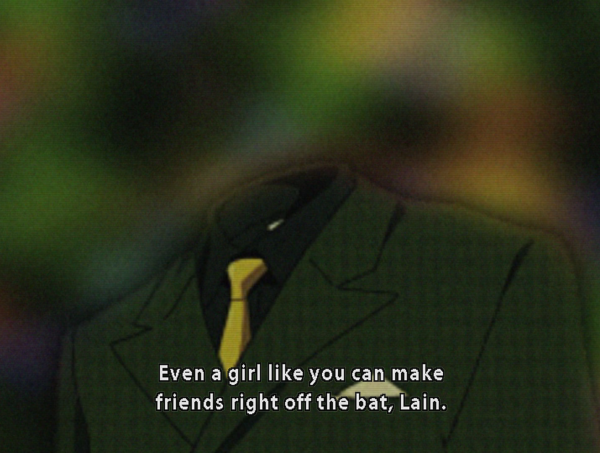 There is one more thing that bears mentioning, and that’s Lain’s pyjamas. It’s not particularly subtle, but these symbolise Lain’s childlike innocence at the start of the series. Within a couple of episodes she’ll mostly stop wearing them as she steps outside the naïve world of childhood and learns about the Wired as it really is, and indeed as she tells her father she’s ready for a new Navi she removes the hood.

That said, there are a couple of indications that her transformation is already underway. One, as mentioned, is that it appears that only she can hear the voices on the train. Also, when Lain pulls out her first Navi we see a shot of her reflection on the screen. It’s like a first glimpse of Lain of the Wired. 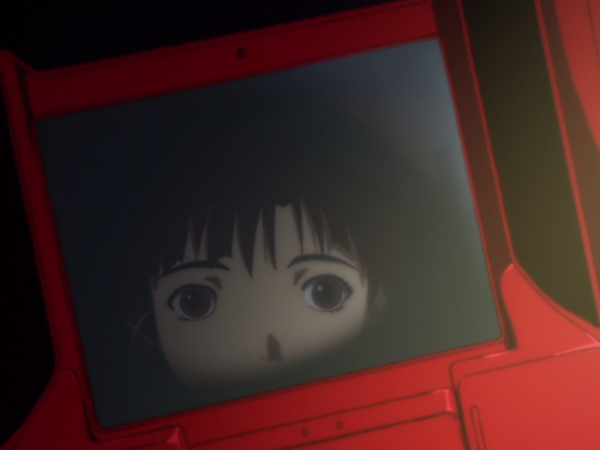