Buckle up, because this is where serial experiments lain starts to get weird. Layer 05: Distortion’s voice-over says, “If you can hear it, then it’s speaking to you. If you can see it, it’s yours to have.” The first part is true enough. The episode proper begins with the disembodied voice of Eiri Masami lamenting that mankind can no longer evolve, and tells Lain that he’s “God.” Lain speaks to a series of apparitions of a doll, a mask, her mother, and her father, each of whom speculates on prophecy and the nature of the Wired. At school, Lain’s friends ask about a hack she apparently did of the city’s traffic system, but Lain has no memory of it. Mika keeps seeing the message “Fulfill the prophecy” and is replaced by a double at the end of the episode. 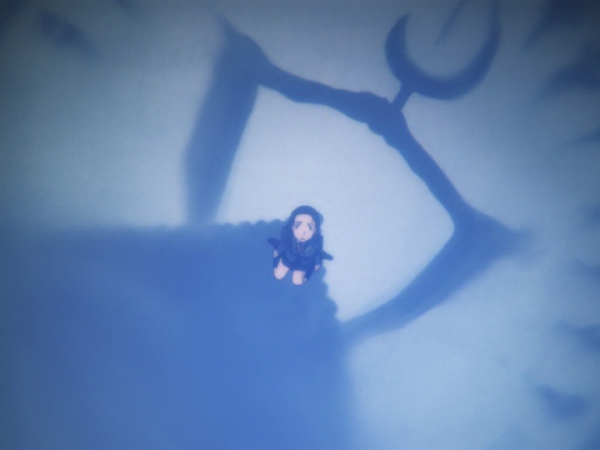 Well, this is the episode where the story gets complicated, so let me buy myself some time to think by talking about a couple minor points I like.

One is the scene where the Iwakuras are having dinner, and Mika asks Lain about seeing her in Shibuya. The conversation doesn’t go anywhere, but twice we’re shown objects being passed betwen the two, emphasising the distance between them. 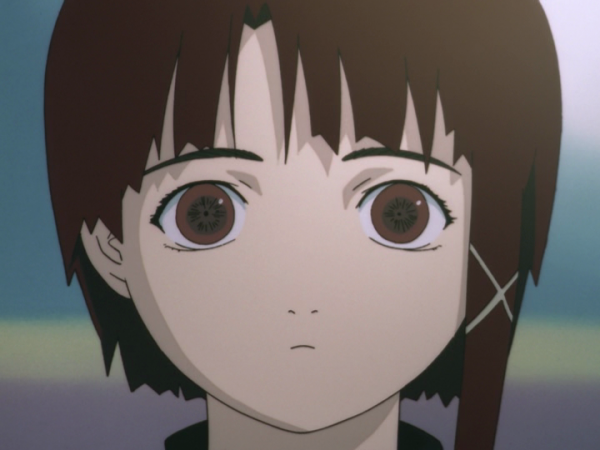 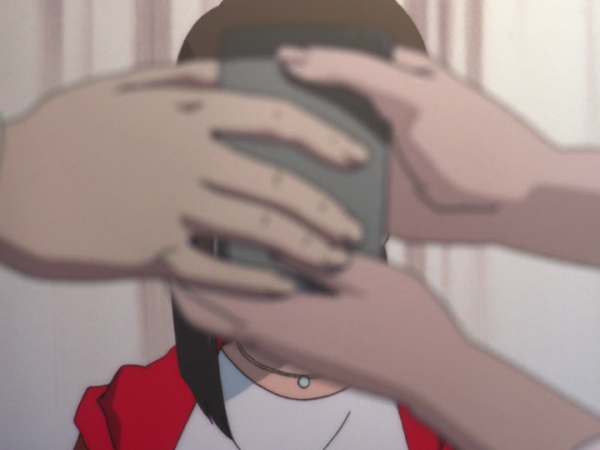 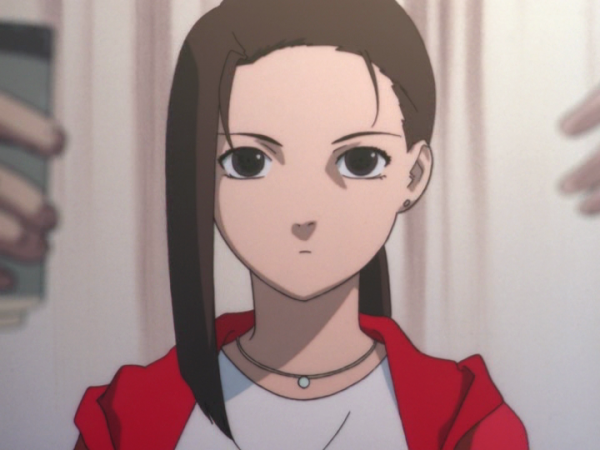 I also really like Taro trying to hit on Mika. It tells us a little about Taro, but it’s also a needed moment of levity in a show that doesn’t have a lot of comic relief.

Also, when Alice is eating with Reika and Julie, she tells them a little about the Knights. Alice is fairly computer-literate and aware of what’s going on in the Wired. However, she has a much healthier relationship to technology and doesn’t become obsessed with it as Lain does, making her a foil to Lain to some extent.

Alright, now to the main points. Let’s start with Lain’s various conversations. The first is more of a monologue from Eiri. He’s reached out to Lain before on the train, but this time she’s out on the street and is no longer startled or confused by his presence. We get some of Eiri’s motives here, his disgust with the body and the physical world, and frustration at mankind’s inability to evolve. However, he says that the Wired may be a way forward for human evolution.

Keep in mind that, though Eiri is more than a little crazy, the 1990s were a time of utopian visions for what computers, and the internet especially, might accomplish.

Now, to the dialogues in Lain’s room. Notice, first of all, that her room is almost empty – all of the computer equipment is gone. What I gather from this is that these conversations are taking place in the Wired, not the real world, and that her interlocutors are people from the Wired. I don’t recall any hints to the identities of the doll and mask, and there’s certainly doubt about the apparitions of her parents, as well.

The doll claims she can’t tell Lain a story that “she doesn’t know” because Lain knows everything. Lain herself, though, seems unaware of this. Presumably, Lain of the Wired or some other version of Lain is omniscient, or she knows (or at least potentially knows) everything that happens on the Wired, making her effectively omniscient. Still, she tells Lain “For every event, there is first a prophecy. An event first comes into existence when there is a prophecy.” When Lain asks who makes these prophecies, the doll silently disappears.

This line of discussion continues with the second interlocutor, a mask, who tells Lain that “The prophecy is being fulfilled […]. History is not merely a linear collection of points that we pass through on a timeline. They are connected by a line. No, perhaps it is more accurate to say that they are made to connect.” Lain asks who connects them, and then the mask also silently vanishes. 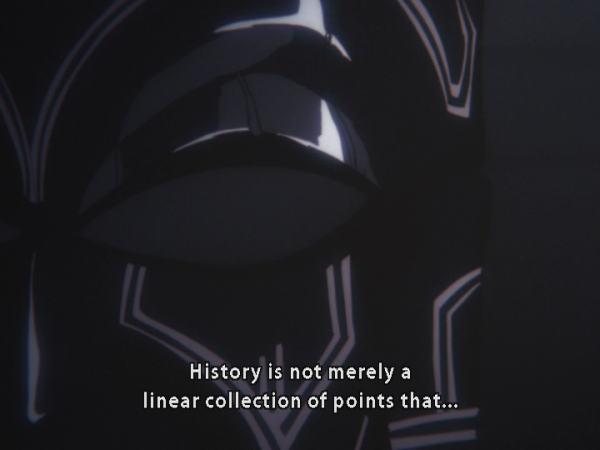 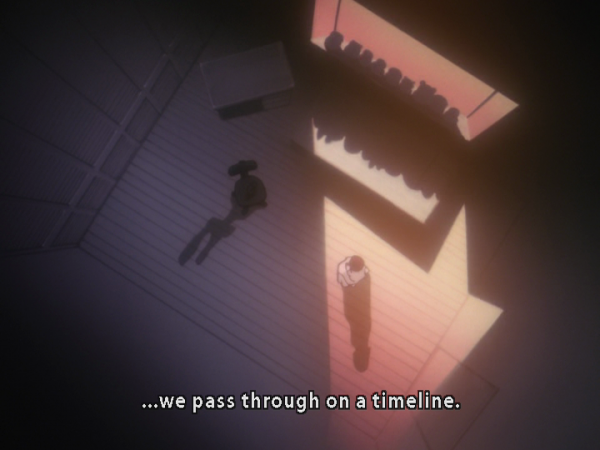 Mika also receives several messages about prophecies in this episode, so what in the world are they on about? Since Mika sees a vision of the Knights’ emblem while she’s being haunted by the “Fulfill the prophecy” message, I think it’s safe to say that these first two interlocutors are Knights. Given that Eiri styles himself as a god and the Knights are his followers, it does make some sense that a god would have prophecies about him. Unfortunately, it’s not at all clear to me what, exactly, these prophecies are, who makes them, or how they’re fulfilled.

We can make some sense of the doll’s statement that “An event first comes into existence when there is a prophecy” when we keep in mind that, later in the series, some characters would have us believe that if something isn’t remembered, it never happened. The corollary would be that if something is remembered, it did happen, and if we look from the past to the future, if something is thought of then it is happening or will happen. It’s an extremely subjective view of the world, but it fits in with the general viewpoint that lain puts forward, and from what I gather (and as a disclaimer, I’m not knowledgeable on this subject) also fits in with the worldview of people like Timothy Leary, who will be referenced in Layer 09.

After the mask, Lain’s next visitor is her mother, or least an apparition of her, who tells Lain that the Wired is “an upper layer of the real world,” or at least that it’s reasonable to think of it that way. She goes on to say that “physical reality is nothing but a hologram,” the activity of the brain merely electrical impulses, and that the body exists “only to verify one’s existence.”

Now, I have several questions. It’s not clear to me what she means by a hologram; that implies no physical existence at all, but if the brain consists of synapses sending and receiving signals, there must be some physical reality. What I think she’s getting at is that the physical world exists, but is essentially created by the signals in our brains. The Wired is real, the physical world is more-or-less a hallucination.

Lain, though, only has one question: “Are you really my mom?” So far, Lain’s been having fun with all this, but now her investigations are getting real (or unreal, if we believe Mrs. Iwakura [or the person from the Wired impersonating Mrs. Iwakura]). However, she fades away silently, like the rest of Lain’s interlocutors. 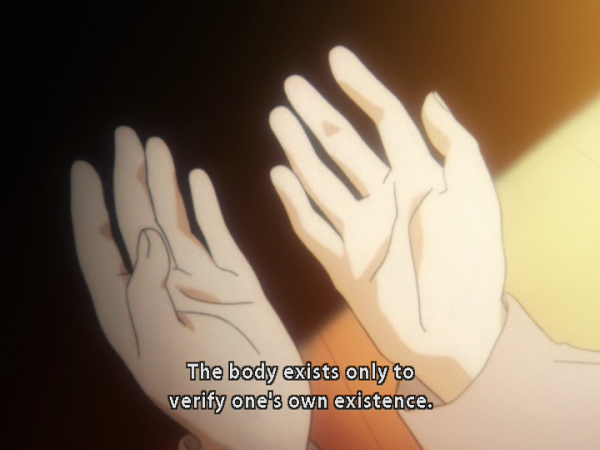 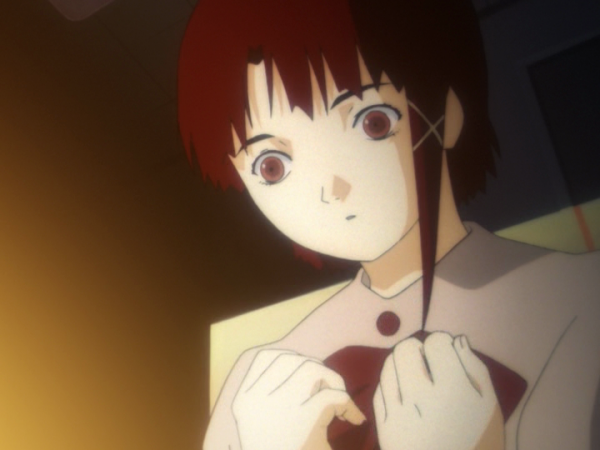 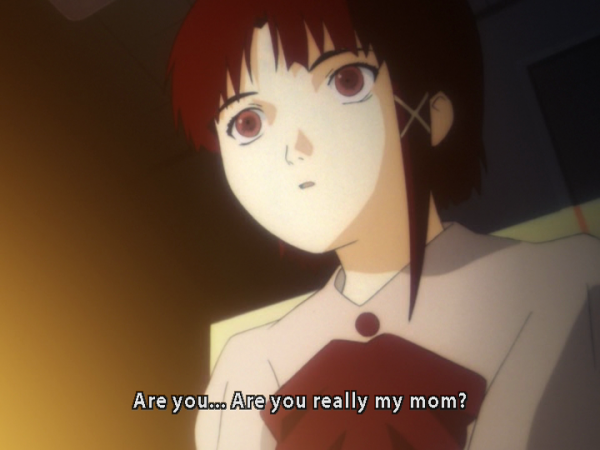 Finally, Lain sees her father (or, again, someone using his form as an avatar). He first appears in darkness, with glare on his glasses making his eyes barely visible. Even more so than with Mrs. Iwakura, Mr. Iwakura looks ghostly and even doll-like. Lain starts the dialogue by asking “Are you my real dad?” He ignores that, though, and speculates that what flows through the Wired isn’t just electrical information. When the Wired was created, it may have created a new world, and though (according to Mr. Iwakura) God in this world is only a concept, in the Wired “there may be a Deus-like embodiment.” Furthermore, this “god” may be powerful enough to influence the real world “in the form of a prophecy.”

Mr. Iwakura’s speculation ties all four dialogues together. Yes, it apparently is Eiri who creates these prophecies, presumably with help from the Knights. Furthermore, the Wired, like the real world, is essentially electrical information, though not just that – both are basically data, and both are separate, at least for the time being.

There’s one more issue to address here, and that’s what happened to Mika. From what’s been said so far, we can gather that she’s being pursued by the Knights. She then seems to have been replaced by a double. Is that what happened, and if so, why did the Knights do this? 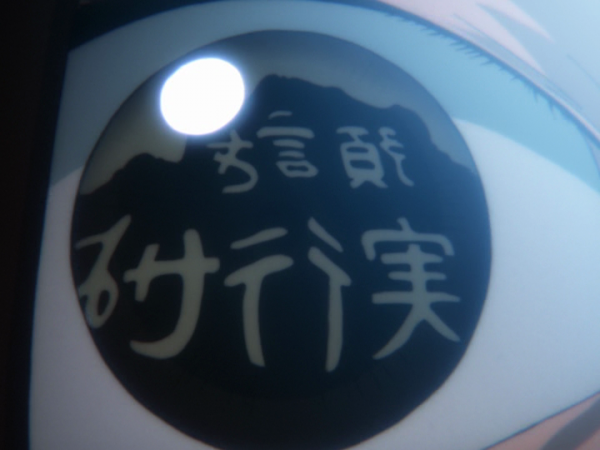 For a long time I wasn’t really sure, but my thoughts on this have been clarified thanks to a conversation with a friend on Twitter. The Knights’ goal is to destroy the barrier between the Wired and the real world, and Lain is a key to this. However, she may not go along with this if she’s too attached to the real world, so it makes sense to sever her connections with her family. So, attack Mika and replace her with a brain-damaged version of her, and plant seeds of doubt in Lain’s mind about the identity of her parents (hence, then, why they may have chosen the images of her parents as avatars for the above dialogues).

I’m aware of two possibilites for Mika’s fate. The one I’ve held in the past is that she was, as said above, replaced by a double. The other is that the Knights essentially pulled her into the Wired in the café, which is why everyone else disappeared, and then she basically “broke” when her soul made it to her house and saw her body there.

Both are plausible, I think, but at the moment I favour the latter, despite a couple reservations. One is that seeing herself at the entryway strongly implies, to me, that at that moment there were two of her. That isn’t decisive because so much of this series is either from a fully subjective point of view or is actually in the Wired, not the real world at all, even though it’s not always obvious which is which. Secondly, though, is that we don’t see anyone else’s soul separate from their body while still alive. 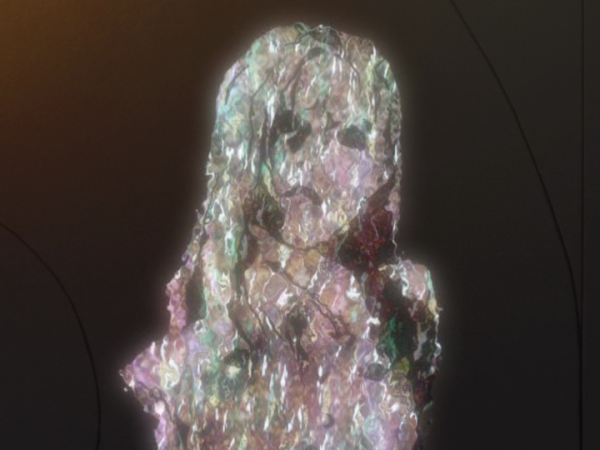 I think that covers this episode, finally. This may be the most difficult episode in the entire series, but nonetheless, it’s pretty much what we’re in for the rest of the way.