Time for another episode of serial experiments lain. The voice-over for Layer 06: Kids tells us, “If people can connect to one another, even the smallest of voices will grow loud. If people can connect to one another, even their lives will grow longer. So…” The episode proper begins with Mr. Iwakura watching Lain stare blankly into a monitor, but we then switch to Lain’s point-of-view in the Wired, where she’s having a nice chat with the Knights, though only her side of the conversation is audible. At school, Alice expresses concern that Lain is regressing to her old self, so they hang out after class. A few times in the episode we see children looking up to the sky with arms outstretched, and at one point see a figure of Lain in the sky. 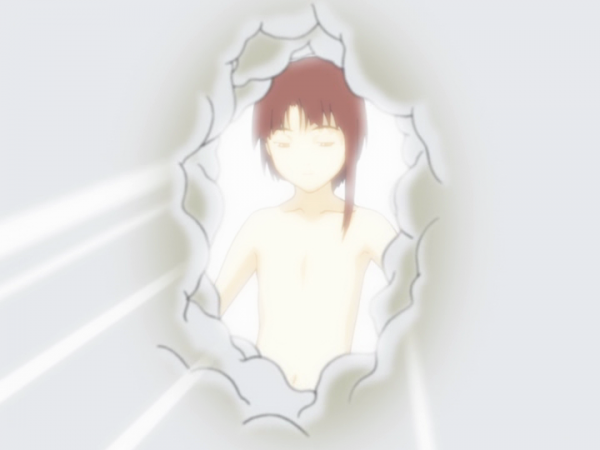 Lain tracks down Prof. Hodgson, who she finds in a nice villa somewhere in the Wired. He explains the K.I.D.S. system, and that someone has figured out a way to use it to harness psi energy even without the need for K.I.D.S. hardware. Back in her room, Lain asks out loud to no visible audience what the point of it all is, believing it must be the Knights behind this. The MIBs return and when Lain goes out to confront them, there’s an explosion in her room, which they tell her was the work of the Knights.

So, one thing to note at the start of the episode is that Mr. Iwakura’s eyes are visible again, in contrast with his ghostly figure in Layer 05. His obvious concern with Lain and her obsession is part of what marks him as one of the most human characters in this story, probably second only to Alice. Just on a side note, I’ve always found it a little funny that he’s shocked to see all this computer equipment in Lain’s room – how did she get all this stuff in the first place, and why didn’t Mr. Iwakura notice? Has someone been sending it to her? Has she been mining for cryptocurrency and paying that way? Does Lain have a Patreon? Heck, is all this stuff real at all? I assume so, but who knows with this series. 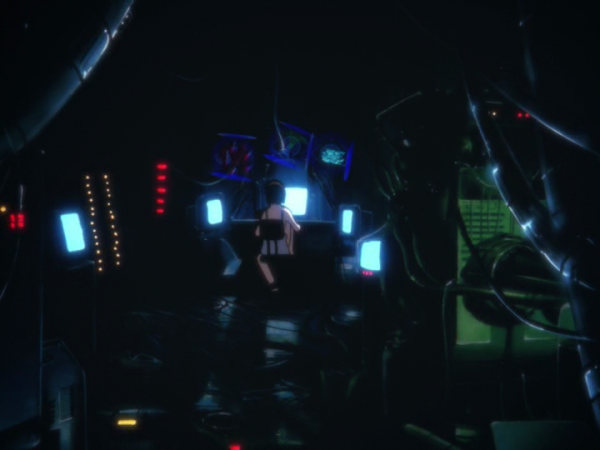 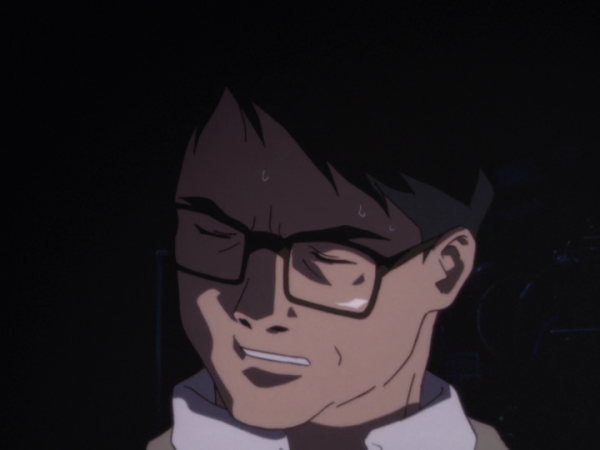 Anyway, one small thing I find interesting when Lain says she has friends in the Wired is that it’s Reika who objects that this isn’t the same as a real friend, which Alice and Julie laugh at. Given that Alice is Lain’s real-world anchor, one would expect her to be the one to say this, but as we saw last episode, Alice is fairly computer literate and apparently comfortable in the Wired. I also like that this tells us a little about Reika’s character, since she and Julie don’t get much attention or development in lain apart from Alice.

Here’s a question, though: Is a net-friend the same as a real friend? In most cases, the answer is an obvious “no.” They’re merely acquaintances who, like coworkers in a different department, we may get along with and be friendly to, but are never all that close to. That said, sometimes we do have a deeper relationship than that, even though we’ve never met the other person. “Acquaintance” seems too casual, but “friend” seems like a strong word. There isn’t really an existing English word that adequately covers this situation; pen-pals are probably the closest pre-internet analogue.

Now, “friendship” is used a few different ways, and loosely following Aristotle here, two of them certainly apply to online relationships. Friendships of utility, e.g., business partners, is obvious enough. Also, friendships of pleasure, which I think covers the large majority of online relationships. In almost all cases, I follow this person or that on Twitter because we share common interests and have fruitful conversations on those topics, or because I simply enjoy that person’s company. I do miss these people when they vanish, but it’s in much the same way I miss good coworkers from past jobs. It’s nice having them around, but I’m not too torn up over their absence as I would be a family member.

Finally, though, there’s what Aristotle calls virtuous friendship, which is basically what people have in mind when they object to calling online acquaintances “friends.” Here I can only speak from my own experience, but there are a small handful of people, maybe two or three, whom I’m tempted to say really are friends of mine. Yet, there still seems to be something missing since I haven’t met them in person and don’t even know their names.

Man is a social animal, and we were created live among one another, which necessarily involves a physical presence – hearing each other’s voice, shaking hands, making eye contact, all of that. Without it, our relationships are rather abstract and ungrounded. “No matter where you go, we are all connected” Lain tells us. That’s true in a few senses; no man is an island, after all. However, the nature of Man is such that we cannot meaningfully connect to each other in an abstract way, without a real-world meeting.

With that out of the way, back to the episode. I’ll skip over Prof. Hodgson’s infodump, except to note the difference between his and Lain’s reaction to how his invention is being used. She feels that something must be done, and isn’t impressed with his remark that “No matter how I punish myself, those children won’t return to the real world. And there’s even less I can do about this current group.” It’s not clear how genuine these feelings are, since he shows little body language and his tone of voice remains mostly even throughout the scene, but it’s possible that both this and his acknowledgement of the talent of whoever modified his designs are real. We can, after all, acknowledge someone’s skill without approving of their actions, even if it is difficult.

Oh, and Mika (or Mika’s double)… well, she probably isn’t going to get that college recommendation. 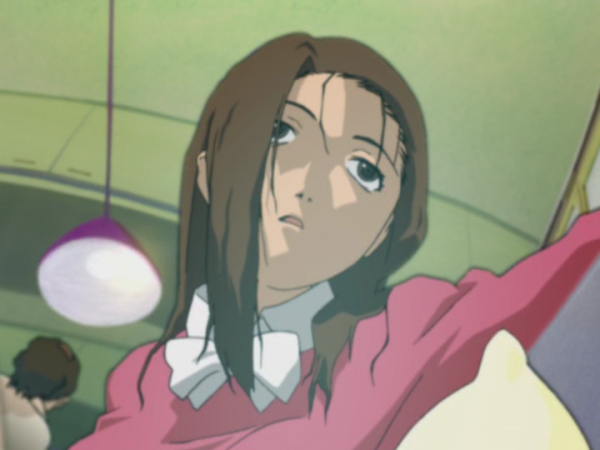 As for the end of the episode, who was responsible for the bomb in Lain’s coolant system? Karl says it was the Knights, in which case I assume it was a warning shot not to dig too much farther into the K.I.D.S. system. One other possibility that, at this point, seems plausible is that the MIBs or their client may have done it since Lain has, so far, been more-or-less on the Knights’ side, though that starts changing with this episode. Now, it is possible that they’re responsible, though we’ll find out much later that Tachibana and Eiri may not be so antagonistic after all.

It’s fairly common for popular anime to have books come out related to them, most often things like art books or episode guides, which vary wildly in interest and quality. Lain is no exception, and Japanese-literate fans are fortunate to have a few books all worth getting. As for those who aren’t up on their Japanese, though they have more limited options, can still enjoy a couple of these.

Let’s start with the best-known, the art book An Omnipresence in the Wired, which received an American release as Lain Illustrations. This was actually ABe’s first published art book, and though the book doesn’t make it entirely clear what each illustration was originally intended for, they’re mostly sketches and paintings for promotional materials, DVD and soundtrack covers, and so on. It’s well worth owning, but what really makes this an essential for lain fans is the comic the nightmare of fabrication, a short story about an alternate version of Lain and Eiri Masami which, though narratively unrelated to the TV series, does touch on the motif of rewriting memories. Part of the original concept for lain, and part of the reason they call it an “experiment,” was that they planned to elaborate on the story’s various themes in different media, and this was part of that. We’ll get to the third experiment, as well as more details about this comic in particular, later on. 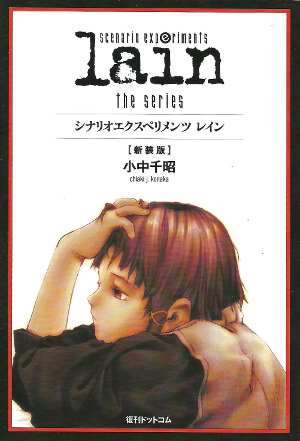 Next up is scenario experiments lain, which is simply Konaka Chiaki’s screenplay with some notes, staff and cast credits, and a few illustrations. It’s exactly as advertised, and I have to say it is well put together. There is no English edition, though, so unless your Japanese is strong and having the lain script in print sounds handy it may not be of much use outside of collector’s value. For myself, I’m happy that I was able to make some use of my copy in writing up this series for a later episode.

Visual experiments lain is primarily an episode guide, again with credits and information about characters and things that appear in each episode alongside many screencaps and illustrations. It also includes a handful of interviews with the staff. Unfortunately, this one is also Japanese-only, and so also just a collectable if your language skills aren’t up to the task.

We anglophones did get something comparable to visual experiments lain, though, in serial experiments lain: Ultimate Fan Guide, written by Bruce Baugh. The largest part of the book goes through episode-by-episode, summarising each and illustrated with many small screencaps, and it also includes character profiles. Again, the primary value for most people will be as a collectable, but I did find it very handy while writing about the series. Also, about 1/3 of the book provides information on how to incorporate lain into the BESM (Big Eyes, Small Mouth) system for role-playing games. This was intended as a major selling-point for this book, but I have no idea how popular BESM was then or is now. For what it’s worth, I have seen a handful of reviews mention that it could really have used more information on this, so keep that in mind if you are one of the brave few (or brave many, for all I know) still using BESM.