Ready for more serial experiments lain? Our friend the voice-over says in Layer 08: Rumors, “Do you want to be hurt, too? Do you want your heart to feel like it’s being scraped with a rasp? If you do, don’t look away, whatever you do.” Lain meets with Taro in a computer game world where he’s killing other player characters, telling Lain that nobody knows what’s fun or why. Lain speaks to an artist making models of scantily-clad women, and they speculate on Tachibana’s R&D efforts and whether they’d do anything illegal. In particular, he mentions how Protocol 6 (essentially, IPv6 in our real world) is “reaching its throughput limit,” and that whoever can control Protocol 7 can control “the economy of the Wired,” and that there are constant sabotage efforts against it.

Lain mentions to her parents, with a nervous laugh, how she’d been recently asked if they’re her real parents, but gets no response besides a stare. At school, Alice and her friends confront Lain about spreading rumours about Alice. Lain next enters a chatroom of some kind where the participants are, of course, sharing rumours and wild speculations; “God” appears and talks about his and Lain’s nature. Now, she’d apparently been absorbed in her pocket Navi but snaps out of it to see everyone in her classroom staring at her and a message on her Navi, “Lain is a peeping tom.” She runs away and worries about what she’d done on the Wired, and we see a vision of the school exploding. We then cut to Lain of the Wired watching Alice fantasise about a teacher. Lain confronts Lain of the Wired and strangles her. Back in the chatroom, Eiri tells Lain that she’s omnipresent in the Wired, and Lain figures that she can erase people’s memories – including the memories of her double and the rumours she’d spread, which she then does.

They did indeed forget, but as Alice and the rest walk toward Lain a double, the cruel Lain, appears – and it’s this Lain that they can see and interact with. 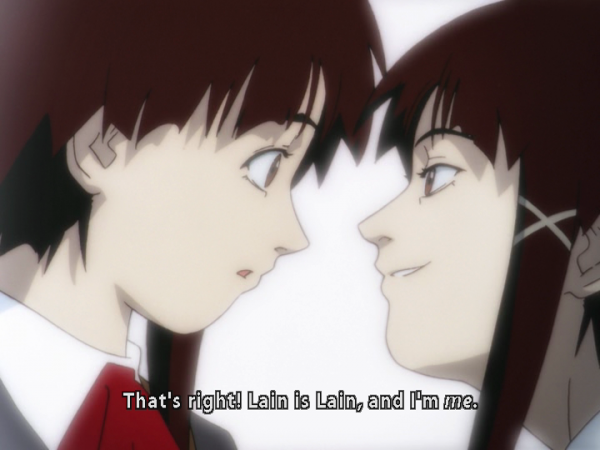 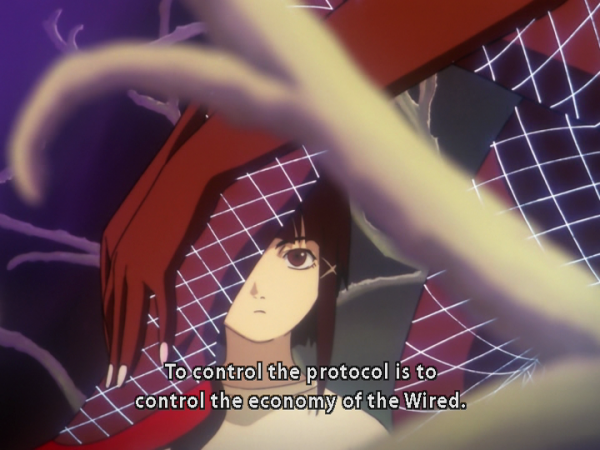 The question regarding Lain’s parents was, of course, brought up last episode, and their response to Lain here tells me that the Tachibana boss was on the right track; the Iwakuras are not Lain’s real parents. Note that Mr. Iwakura’s glasses are opaque because of a glare from an unseen source as Lain enters the room, but the glare is gone when he and his wife look to Lain, not saying anything but with an expression like they have some bad news to deliver. The effect is that he seems distant at first, but more honest at the end of the scene.

At school, and really throughout the series, Alice is very patient and forgiving with Lain. In contrast to the Wired rumourmongers, Alice always prefers to assume the best of people. The internet tends to bring out the worst in people, because the people we speak with seem less real due to pseudonyms and lack of things like tone of voice, eye contact, etc., and our own anonymity removes us from a feeling of responsibility. Alice’s good nature, then, makes her feel more like a real person as opposed to the extremely online personalities of the chatroom participants.

Who knows how much of what the chatroom participants say is true? It doesn’t matter, really, as they’re essentially voyeurs. As for “God,” it is interesting to see Eiri talk about himself a little. He at least doesn’t claim to be the creator of the world (meaning the real world, I assume), but adds that “The all-powerful ruler of the world” is “giv[ing] God too much credit.” Well, God would be all-powerful pretty much by definition, but Eiri is, I believe, mostly interested in increasing his own power, or at least the perception of his power, and one way to do so is to downplay the power of other “gods.” He does claim to be like God in that he’s omnipresent, though. He also talks about how Lain has always existed in the Wired and that the “real world” Lain is just a hologram of the Lain of the Wired, much as the apparition of Mrs. Iwakura said in Layer 05. 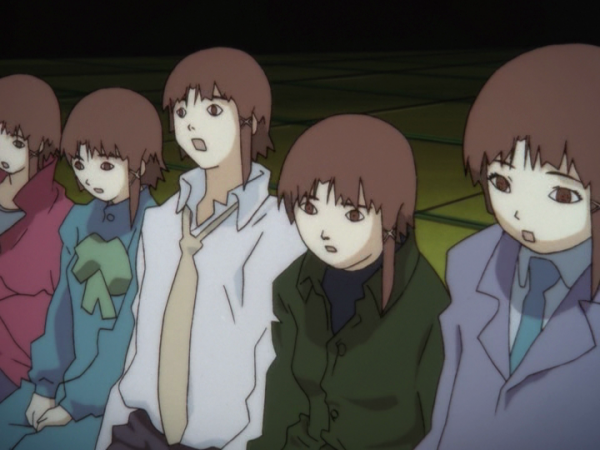 One confusing comment Eiri makes when Lain asks who he is, is “I am you.” Now, I don’t think that’s true, so I assume that he says this to throw Lain off-balance and make it harder for her to think through what he tells her next. If she accepts that the real world doesn’t matter, then she’s more likely to help weaken the barrier between the real world and the Wired, giving Eiri more influence over both.

Do all of the students at Lain’s school really stare at her? If rumours of what Lain’s been doing as a peeping tom get around, as they certainly could in a school, then it’s possible that most everyone would recognise and stare at her. That said, I think it’s more likely that this scene is from a subjective point of view. Alternatively, the scene takes place entirely in the Wired. This would make the finale of the school exploding easier to understand, because while it’s unlikely that Lain has turned into an IRL terrorist she very well could, in some fashion, destroy a Wired version of the school, which we could think of as a space where her classmates share information and rumours. Something like nuking all of your teachers’ and classmates’ social media accounts all at once.

I’ll also say that this is one of my favourite scenes in the series and one of the creepiest. Cutting between shots of Lain, her classmates, and panning across crowds of students looking at her is effectively uncomfortable, especially since we naturally assume, at least at first, that this is taking place in the real world. 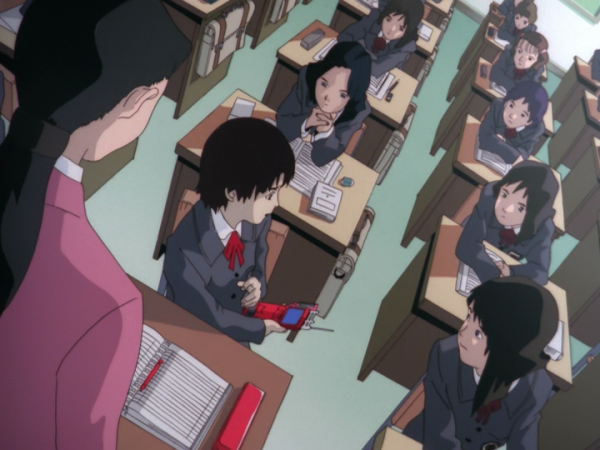 One question in the scene of Alice touching herself is how Lain of the Wired knows what she’s fantasising about, exactly. It could be an intelligent guess given what she already knows about Alice and the teacher, but if humans are already “connected” in some sense without devices then it’s also possible that Lain can essentially read minds.

Oh, and we get a good example of one of lain’s trademark shots, seeing a reflection (Lain of the Wired, in this case) in a character’s eye. I’ll give the animators credit for making good use of these shots without abusing them. 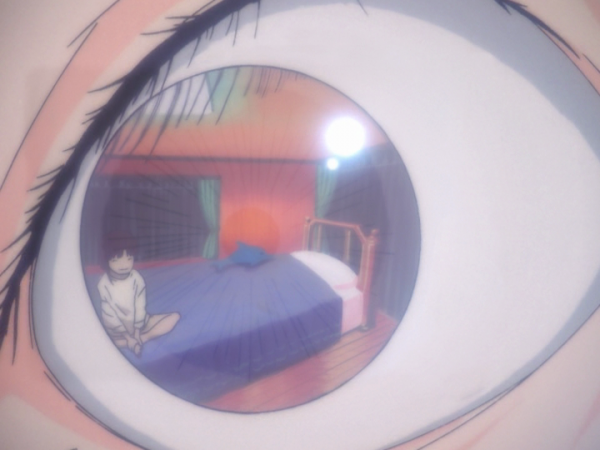 We’ll come back to Lain vs. Lain of the Wired shortly. Reinforcing the idea of the omnipresent Lain, all of the headless figures from the chatroom now have Lain’s head. Eiri slightly modifies what he said before, “I am you,” to the more plausible “You’re the same as me.” I don’t know the connotations in the original Japanese, but in English this could simply mean that they’re alike in some way, not literally the same. For reference, the “I am you” line is “僕は君さ。” “You’re the same as me” is “君は僕と同じさ。” As far as I’m aware “同じ” (“onaji”) does mean identical, but I’ll have to defer to someone who speaks the language better than I do on that.

Regarding spreading rumours, Eiri’s position is an extreme version of “information wants to be free.” He doesn’t explain here, but mere data, after all, is useless. It must flow to accomplish anything. Lain’s bright idea of erasing memories will turn into something of a motif, and we’ll return to this concept in a later episode when it’s a little more fleshed out.

Lain’s cruel double at the end of the episode tells Lain as she calls out to her friends, “Lain is Lain, and I’m me.” This is something Lain doesn’t want to believe, as she claims when she tried to strangle this double earlier that “You’re not me. I’d never do what you do.” Yet, she later adds, “Why are you acting like the part of me I hate?” Apparently, then, Lain of the Wired isn’t so much a second Lain as she is a part of Lain. 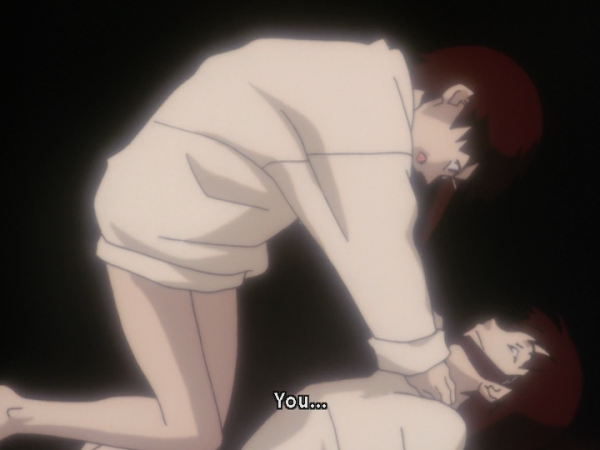 It’s impossible to say just how frequent or extreme this is, but it’s been observed for a long time. In Cyberia, for example, Douglas Rushkoff discusses an incident on a BBS where a respected moderator took over an alt account where he acted as a vicious troll, and I’d wager that this was by no means the earliest occurrence of this phenomenon. An anonymous account frees the user from social penalties for antisocial behaviour, though this can be good or bad. If a man is particularly resentful or mean-spirited he’s apt to turn into a mere troll. However, it also opens up discussion of politically incorrect topics that few are brave enough to talk about under their real name.

Note, by the way, that this is all well beyond merely performative socialising, like only posting about positive events on Facebook, which are simply online, sometimes amplified versions of what we already do in the real world. Indeed, the normie’s default mode of carrying his real name and identity into online space is, to digital natives (and I’d include myself as one), bizarre. In some cases, like 4chan and similar image boards, we don’t have a unique identity at all. Usually, though, on forums and social media, we create an entirely new identity – or more accurately, an avatar.

That word, “avatar,” is significant. Though it’s become basically synonymous with “profile picture,” its root meaning is a god’s manifestation in the real world. Through our avatar, we manifest ourselves in the digital world, free to recreate ourselves however we see fit. This freedom is exhilerating, but as we’ve seen, it can turn out for better or worse.