Note: This is another post originally published at Thermidor Magazine, in this case on March 21, 2017. Again, I’m posting this with only minimal editing. 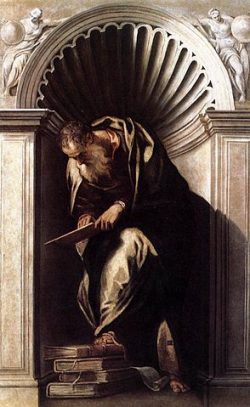 Much of the process of moving politically Rightward consists in correcting the inadequacies of ones education. This process is most obvious in things like history or human biodiversity, but is certainly present in the arts, as well. Though a handful of books from the Western canon are still commonly covered in school, like Beowulf or The Odyssey, most curricula, even at the university level, fall far short of a comprehensive treatment. I majored in literature in college, and even aside from the cultural problem of being one of the few students truly passionate about this stuff, my formal education covered very little written prior to about 1800 aside from Shakespeare, and almost nothing not originally in English.

How does one go about correcting this? The simplest is just to start reading. Beginning with the Classics is a solid option, and I’ve offered my own suggestions elsewhere, but almost anything is better than nothing, so, as long as one builds a habit of reading, most works above the level of young adult literature will do as a start. SWPLs are deservedly mocked for their obsession with the Harry Potter series, not because they started their reading “careers” there but because they stopped there. So even relatively light material will work as a starting point, as long as one progresses towards the Classics.

Now, though selecting one’s reading according to whim is good enough for many, some of us do prefer a more structured approach and appreciate some guidance. One often recommended resource is Mortimer Adler and Charles van Doren’s How to Read a Book, which focuses on non-fiction but much of their advice is broadly applicable. They also include a handy list of recommended reading. Henry Dampier’s review from a couple years ago offers a solid overview. For something more specific to poetry, there’s Ezra Pound’s idiosyncratic but helpful ABC of Reading, which is especially valuable for anyone interested in Pound’s own work. Those who feel a little braver, though, and really want to get into the nuts-and-bolts of how fiction is put together, may want to take a look at Aristotle’s straightforwardly-titled Poetics.

Though hardly the most exciting book I’ve ever read, even by the standard of things I had to read for school, it’s been one of the most valuable. Aristotle spends most of the book defining terms and drawing conclusions based on first principles. If you’ve read any of his other books you likely know just what to expect, so one excerpt should suffice to get across the flavor of the work. Here he compares the two genres of drama, comedy and tragedy, and epic poetry:

Comedy, as we said, is mimesis [very roughly, imitation or representation] of baser but not wholly vicious characters: rather, the laughable is one category of the shameful. For the laughable comprises any fault or mark of shame which involves no pain or destruction: most obviously, the laughable mask is something ugly and twisted, but not painfully. […]

Epic matches tragedy to the extent of being mimesis of elevated matters in metrical language; but they differ in that epic has an unchanging metre and is in narrative mode. They also differ in length: tragedy tends so far as possible to stay within a single revolution of the sun, or close to it, while epic is unlimited in time span. […]

Tragedy, then, is mimesis of an action which is elevated, complete, and of magnitude; in language embellished by distinct forms in its sections; employing the mode of enactment, not narrative; and through pity and fear accomplishing the catharsis of such emotions.

Great, so now you have an idea of what each of these media are, or at least of how Aristotle thinks of them. However, though that’s helpful in understanding Greek literature, the specific definitions are, as I said, the surface level of what this book teaches. More importantly than that, Aristotle’s work trains the reader to think seriously about storytelling at a technical level. That’s obviously helpful to those of us who make literature a primary academic focus, but what about to more casual readers, those who just want a basic familiarity with the Western canon? Flannery O’Connor, in her essay “The Teaching of Literature,” offers a good explanation:

For the reading of literature ever to become a habit and a pleasure, it must first be a discipline. The student has to have tools to understand a story or novel, and these are tools proper to the structure of the work, tools proper to the craft. They are tools that operate inside the work and not outside it; they are concerned with how this story is made and with what makes it work as a story.

Think of biology for a moment. How useful is it to dissect a frog in school? It’s not a practical skill for the vast majority of people, but it does give a student an understanding of how an animal’s body is structured, which helps understanding biology more broadly. Though not a necessary exercise, it’s a more broadly useful skill than is first apparent. Similarly, very few people will ever analyse a novel, poem, or play on the level Aristotle discusses them. However, internalising that knowledge and way of thinking does help in understanding literature in general more easily.

I don’t want to overstate how textbook-like the Poetics is, though, because there are some engaging passages apart from the definitions of terms. I’ve always liked his discussion of whether tragedy is superior to epic poetry, and I had to smile at his observation that “poetry is the work of a gifted person, or of a manic: of these types, the former have versatile imaginations, the latter get carried away.” Translator Stephen Halliwell notes that this should, perhaps, be “rather than a manic” instead of “or of a manic,” but I prefer the “or” because there are poets of the manic type, though perhaps these aren’t necessarily the best writers.

Aristotle also includes a few points of practical writing advice. After discussing different types of metaphor, neologisms, and loan words, and how they can strengthen a work, he adds, “But if one composes entirely in this vein, the result with be either a riddle or barbarism – a riddle, if metaphors predominate; barbarism, if loan words.” Elsewhere, he explains how plots have a beginning, middle, and end, which sounds rather obvious but he uses that to point out that a narrative should not begin or end at an arbitrary point. Though not a total prohibition against beginning a story in media res, knowing where to start and end a novel, short story, etc. is an important part of storytelling.

Now, for those wondering about which edition to get, I read the Loeb Classical Library’s version of the Poetics, translated by Stephen Halliwell. I can’t address his accuracy because the original is Greek to me, but his English sounds natural, though a bit formal. I do prefer philosophy to be written in a straightforward, simple style, but even for me, Aristotle’s writing is dense and very dry, and there’s not much a translator can do about that.

In any case, Loeb’s publications are always of good quality and include the original text on a parallel page from the English translation. Halliwell’s annotations are consistently helpful, and his introduction is fairly interesting. As a bonus, since the Poetics is short, Loeb includes On the Sublime, written by Longinus, as well as On Style, written by Demetrius. These other two works, though not as essential as Aristotle’s, are worth reading and make Loeb’s edition an excellent resource for anyone interested in studying literature or, for that matter, doing some writing of their own.