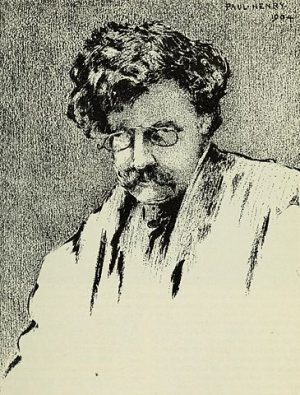 One thing that makes his work especially impressive is that, besides his innumerable essays, he wrote several deservedly popular novels. After burning myself out a bit on his non-fiction, I recently decided to revisit some of his novels, beginning with The Man Who Was Thursday: A Nightmare. It’s about poet Gabriel Syme, recruited by Scotland Yard and tasked with infiltrating a cabal of anarchists. It’s a classic setup for a spy or detective story, aside from the poet protagonist, and up until the final chapter plays out much as one would expect of a Chestertonian detective novel.

So, for example, there’s a lot of humour and an element of farce to much of the plot. At one point, Syme finds an unexpected ally when one of the anarchist conspirators reveals himself as a fellow policeman – while attempting to arrest Syme. After this incident, Chesterton observes:

Through all this ordeal [Syme’s] root horror had been isolation, and there are no words to express the abyss between isolation and having one ally. It may be conceded to the mathematicians that four is twice two. But two is not twice one, two is two thousand times one. That is why, in spite of a hundred disadvantages, the world will always return to monogamy.

The line about monogamy is rather out-of-place, and given Chesterton’s journalistic background one might expect a lot of editorialising. Fortunately, he does keep these asides to a minimum. Though the characters and narrator do a lot of philosophising, it’s mostly organic to the story and never feels preachy. Despite a few digressions, our novelist is a novelist first, journalist second.

I’ve criticised Chesterton elsewhere for getting carried away in his romanticism of the common man, and that does appear here. While discussing whether the people of a small town are collaborating with the anarchists, one character tells Syme:

So you talk about mobs and the working classes as if they were the question. You’ve got that eternal idiotic idea that if anarchy came, it would come from the poor. Why should it? The poor have been rebels, but they have never been anarchists: they have more interest than anyone else in there being some decent government. The poor man really has a stake in the country. The rich man hasn’t; he can go away to New Guinea in a yacht. The poor have sometimes objected to being governed badly; the rich have always objected to being governed at all. Aristocrats were always anarchists, as you can see from the barons’ wars.

Chesterton’s populism won’t endear him to the absolutists in the audience, but these passages do typically have at least a grain of truth in them.

Another minor criticism of his essays carries over into the novel, as well. In his non-fiction, Chesterton tends to belabor his points, and though he’s a good enough novelist not to get totally carried away, this is still a very talky novel. This leads to a few silly moments; for example, when Syme and another detective go to confront one of the leading figures of the anarchist Supreme Council, they devise a system of communicating by tapping their fingers in which certain patterns correspond to letters. So, they can essentially telegraph messages to each other, disguised as mere fidgeting. During the conversation with the anarchist, Syme suspects he knows something about the man’s true identity, and when his friend expresses doubt he taps out, “You scarcely realize how poetic my intuition is. It has that sudden quality we sometimes feel in the coming of spring.”

I laughed, but it’s also obvious that even a poet like Syme would be constrained by this system to very short messages, making this line rather distracting. Similarly, characters tend to have an awful lot to say to each other, even when being pursued or shot at by their enemies. Again, this isn’t a major problem, but it gets distracting.

Now, most of the novel is an enjoyable detective story, but it makes itself memorable via a sharp, sudden turn in the final chapter. I won’t spoil this conclusion because it relies on surprise to achieve its full effect. It’s not quite a “My God, it’s full of stars” moment, but it is totally unexpected, and I’ll admit that I don’t really understand it. My only clue is a comment by Chesterton from an article collected in The Modern Library Classics edition of the novel, which he wrote on the occasion of a stage adaptation of the book. Chesterton writes:

For though I know very little about The Man Who Was Thursday, only a very casual acquaintance is needed to make sure that if it is a novel it is a bad novel. To do it justice, by its own description, it is not a novel but a nightmare. And since that subtitle is perhaps the only true and reliable statement in the book, I may plead it as a sort of excuse for my share in the matter.

He continues a little later:

I tried to turn this notion of resistance to a nightmare into a topsy-turvy tale about a man who fancied himself alone among enemies and found that each of the enemies was in fact on his own side and in his own solitude. That is the only thing that can be called a meaning in the story; all the rest of it was written for fun; and though it was great fun for me, I do not forget that sobering epigram which tells us that easy writing is dashed hard reading.

Some of this, especially the “bad novel” comment, is likely just humility on Chesterton’s part; fun as it was for him to write, it is certainly fun to read, as well, despite the obscure ending. The novel does follow something like dream logic, and like a vivid dream, it feels like it has some deep but inscrutable meaning, lying just beyond our grasp.

So, those who want tidy conclusions in their novels will likely find Thursday a frustrating read. Despite that, and though it’s not a great work, I’d highly recommend the novel to almost anyone. Those who’ve enjoyed anything else by Chesterton will almost certainly like this, too. If you’re new to Chesterton, he’s extremely consistent, so you’re safe starting with almost any of his books, and while this isn’t my favourite of his novels, it’s well worth picking up and makes for as good a starting-point for his work as anything else.

4 thoughts on “Chesterton and The Man Who Was Thursday”