So, first of all, “infornography” is a great word. I think most people know it’s a portmanteau of “information” and “pornography,” but according to visual experiments lain the portmanteau also includes “Inferno.” Didn’t I say back in Layer 02 that by going into Cyberia Lain was descending to hell?

Also, this is how you do a recap episode. They even made the title screen part of the recap, didn’t waste a lot of time going over stuff we already know, edited it all in stylish fashion, and used it to point to Alice’s central role in the last few episodes.

They also gave Apple some free advertising, though this is only the most explicit of a few references to Apple in this show. 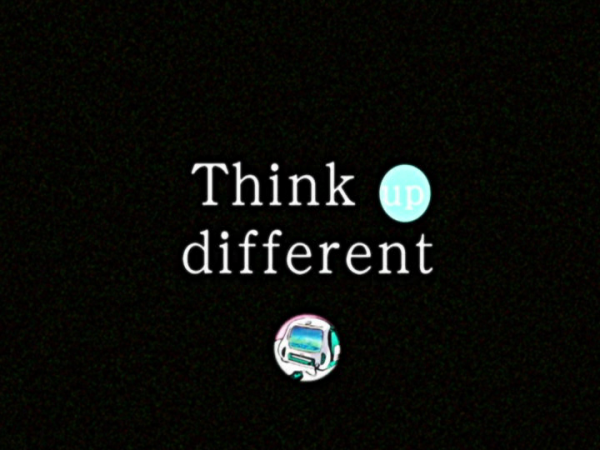 Anyway, Lain has apparently uploaded a Navi emulator into her brain. I’m not sure exactly how that’s supposed to work, but having a computer in one’s brain would make accessing the internet convenient – which is basically what Lain does. While she has appeared in the real world via the Wired previously, based on her comment to Alice that she can go anywhere now this was apparently limited in some way. Perhaps she had been able to manifest only as an avatar, whereas now she’s physically present?

The scene out in the street is excellent. Lain chases off some slithering creature, and Chisa appears from behind it. She’s blurry at first and Lain blinks to be sure of what she’s seeing, like Chisa’s existence is still uncertain at this point, but then seems genuinely happy to see her. The shooter then appears, looking like a sinister figure covered in shadows and the way he’s shot from an odd angle. 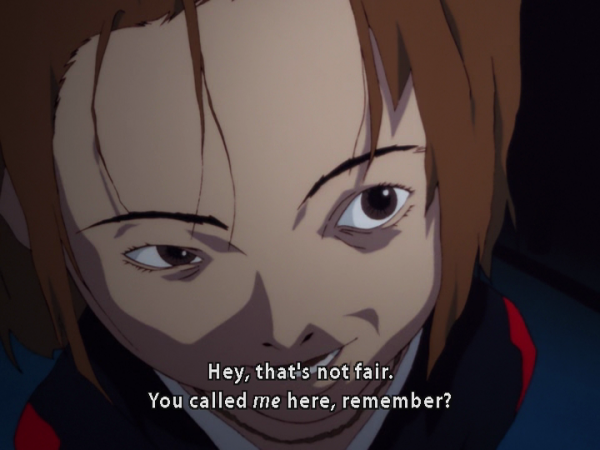 Then, at school, when Lain arrives everything suddenly goes white except for Lain, Alice, and Lain’s weird shadow. Lain gives this creepy smile reminiscent of the cruel, Wired version of herself, which I take to mean that she’s essentially brought all of her alter-egos’ personalities into herself. The scene then fades to black, with both Lain and Alice shown at an angle that emphasises the distance between them. 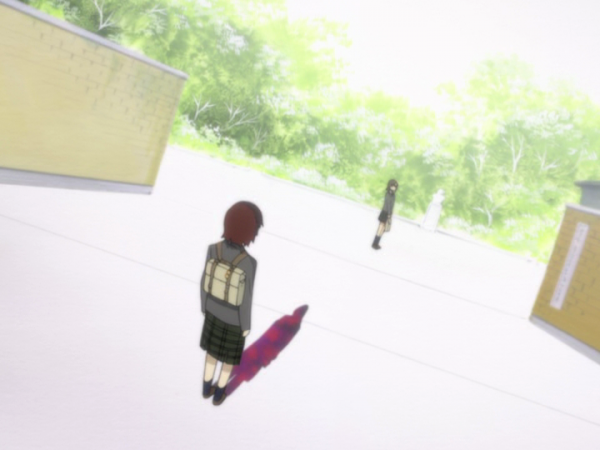 I think the one big mystery of this episode is why Lain has the alien body. All I can figure is that it indicates an affiliation with whatever alien power or higher intelligence the first alien represented.

What this episode lacks in plot development it more than makes up for in style, and it may even be my favourite episode. Everything so far has been condensed, not just via the recap segment but in what Lain now knows and is able to do, as well as her relationship with Alice, and the last two episodes are set up for the climax. 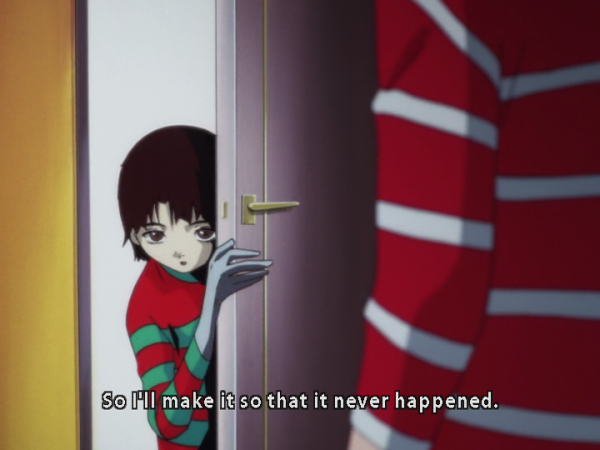 On a final note, I mentioned above how great a word “infornography” is. It’s relevant to lain directly because, of course, so much of the show revolves around the use and misuse of information. In the real world, we can see that otaku culture and nerd culture more broadly has traditionally valued accumulating information relevant to one’s fandom. For example, among PC enthusiasts that might mean knowledge of how computers work, programming, and so on, while among anime fandom knowledge about individual creators and their work and lore about one’s favourite show, etc. Today nerd culture seems to revolve more around conspicuous consumption, which means there may be less elitism due to the lower barrier of entry, but my impression is that this has mostly been a change for the worse.

Regardless, there are still people out there who do get off on infornography. I’ve been seeking it out to write this very series, and we can also relate the concept of infornography to that of “insight porn” sought out by people in various fringe political sub-cultures, as well as those addicted to their social media feeds. What better word is there to describe those glued to their Twitter timelines any time there’s a big event like election results, a natural disaster, or mass shooting. There will always be a thrill in knowing something that most people don’t, and in gaining new knowledge generally. 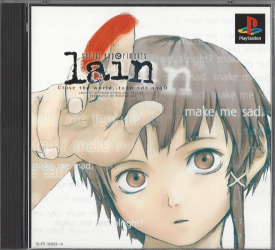 As I’ve mentioned previously, one thing that makes serial experiments lain a “serial experiment” is that the creators wanted to tell variations of the story using different media. The anime is, of course, by far the best and most famous, and I wrote about the comic “A Nightmare of Fabrication” a few episodes back. The third and final lain experiment is the PlayStation game, published by Pioneer and designed primarily by Konaka Chiaki and Ueda Yasuyuki.

Now, when people hear about the lain video game, their first question is typically, “How do you adapt a story like lain into a game?” The answer is that it’s not quite a game, but more like a visual novel. The player navigates through a menu, and each menu item contains an audio recording or, in a few cases, video, which give a snippet of the story. The player pieces together the plot himself from the disparate information he’s given. It’s unique, and I think it’s an interesting method to convey a story, almost like an epistolary novel in visual and audio form.

As for the plot, it begins with a psychiatrist visiting Lain, who’s been identified as a troubled child, for therapy. So, many of the snippets are taken from her notes and her interviews with Lain. From there, the plot bears little resemblance to the anime, but does have a few things in common with “Nightmare of Fabrication” due to questions surrounding her friends’ identity and existence and an attempt to replace a family member with an AI, but I won’t spoil the details for those who want to experience it for themselves.

However, that brings up a serious problem: how do you experience this game? It was only released in Japan, so you’ll need a Japanese PlayStation to start with, and copies of the game can easily cost you $200 or so. Once you have that, you’re in good shape if you speak Japanese. If not, you still have a few other options. One is to simply watch this video with the game’s video scenes and a synopsis of the plot in the description. That will give you the gist of the game, and works well enough if you just want the highlight reel.

Alternatively, you can find a fan-made translation of the script over here. It’s a bit of pain to jump around a PDF document while playing, but it’s doable and that’s how I played through the first hour or so. Finally, there’s a fan-made online version of the game, which is actually easier to use than the real game because of its menu.

So now that you know how to play, is it actually any good? Well, I hate to say this, but:

See, the story actually isn’t bad, though the ending is rather bleak. You can get that from the video linked above, though. The animation gets the aesthetic about right, but even when taking into account that it’s a PlayStation game it looks like a poor man’s version of the anime. Even worse, the menu is a pain to navigate because of slow loading times and it’s not always clear where to move the cursor or what you can and can’t select at a given time. I made it about an hour, but I can hardly imagine grinding through this whole game, especially since I’d need to constantly reference the fan translation.

So, unfortunately, it fails as a game. Still, I’m glad I own a copy because, though it might be the only failed serial experiment, it’s still a unique and interesting one and I’d rather see a noble failure than something good but generic.