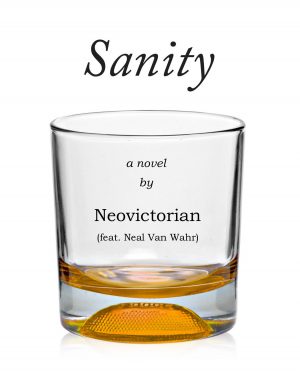 Though fairly short, Sanity is difficult to summarise because it’s one of the fastest-paced books I’ve ever read. Chapters are seldom more than a few pages long, and every one skips to a new time or location with something significant happening in all of them. Even the slower chapters, with the protagonist, Cal Adler, camping out in the desert or just having a conversation with someone take on a narrative significance in part because of the contrast with the frenetic pace of the rest of the book. To give an idea, the very first chapter opens with a mass shooting, then the next chapter skips ahead a few years to Cal thinking back on the experience, and the next skips all the way back to his school days dealing with a playground bully. Soon he’s in high school and the guidance counsellor is essentially giving him an invitation to a secret society, and the rest of the work follows Cal as he moves from one experience to the next, job to job, place to place, in a way that seems almost random but which, by the novel’s climax, has has worked its way to a classic rebirth metaphor.

The opening gives a good idea of the narration style, so breathless that it doesn’t even use past tense:

The second I remember clearest is that James is chewing his second bite of steak when the first pop! comes from somewhere out in the main mall. He’s still holding the fork pointed up at the ceiling and I swear to God I can hear every clink of glass that was in that moment, see the untouched baked potato oozing melted butter on James’ plate, the green bottle of 18-year scotch on the top shelf of the bar behind him, the red/brown paint on the walls and a thousand other things, all at the same time.

By now there’ve been enough of the shootings that some people are *aware*, one might say, but not one of the others there does anything more than move their heads toward the sound but James and I look at each other for some part of a second and we *know*, then pop!pop!pop! three more and they’re louder. More like boom. I grab my bourbon glass, it’s the heaviest thing at hand, without thinking or hesitation we’re down low on our hands and knees, partly under the next table toward the door and James has got his steak knife. I look at him and he looks at me and we don’t need to say anything at all, we talked this through a few times before: “What would you do if…” and the door from the mall slams open and two quick rounds go off, loud as the end of the fucking world, it’s obviously a rifle not some 9mm. I’m sure people are screaming but it’s quiet in my bubble now.

There’s so much going on in this book that even the genre is difficult to pin down. In some places Sanity reads like a coming-of-age story, as Cal speaks to mentors, takes on odd jobs, and reads widely. Then in roughly the second half it’s like Raymond Chandler took over and turned it into a detective story, with Cal working as essentially a private investigator tracking down a rich heiress’s mother. The overall structure of the book, with Cal’s growth and the vast Right-wing conspiracy (more-or-less), resembles an Ayn Rand novel if Ayn Rand wasn’t a bore, and this hardly touches on the secret organisation that first contacted him in high school, which sounds similar to what a couple broadly Reactionary organisations are trying to build here in the real world but which are currently still just planting seeds. The range of influences isn’t surprising given the huge number of references Neovictorian drops, touching on everything from Stranger in a Strange Land to the Chronicles of Narnia, Faust to the I Ching, among many other things.

Now, this all sounds like a fun game of Spot the Reference, but what’s the sum of all these parts? It may be a good story, but the best literature gives the audience something to reflect on afterwards. Doubtless, many of these homages were essentially Neovictorian having fun and winking to the audience, but they aren’t arbitrary, and the story as a whole does have a point to it.

For example, we do see a lot of what appears, at first, to be a message of good old American-style self-reliance. Cal is self-motivated, competent, and when in danger must ultimately help himself. In that first chapter Cal mentions that mass shooting victims will often delude themselves into thinking that help is on the way, but “Lesson number one is, They are not fucking coming.” He and his buddy then head toward the shooter like a couple John McClanes, in what could easily have degenerated into a work of mere wish-fulfilment.

Yet, this isn’t just some individualist manifesto since Cal is never quite alone, and a few of the novel’s turning points are instigated by other characters coming in to support him, whether with advice (as with a couple mentor figures) or helping in a literal fight (as with his friend James in the first chapter, among other places). That mysterious organisation is, again, especially significant and it’s easy to read the book as a combination of two frequent ideas floated around Right-wing circles about how to go about restoring order in the Western world. First, you must improve yourself (“lift weights, read old books,” etc.). Second, you must network with other like-minded people – and like-minded people do exist. I’ve met several people who felt for a time like they were the only sane people left in the world, but felt a great sense of relief when they did discover fellow travellers, whether through Twitter or some Reactionary blog or podcast.

Only Neovictorian can say, but I suspect that this is what Sanity’s title is getting at. If you want to restore sanity to the world around you, start with yourself, and find others you can rely on.

There is more that one could talk about but this is a novel that’s best experienced first-hand. Neovictorian has written a bit about the novel’s background if you want to know more, but the best thing to do is simply to swing by Amazon and check it out for yourself. “The Right needs to do more to cultivate the arts” is an old cliché, but there do seem to be more Reactionaries in the past couple years who’ve been trying to do just that. If we can continue improving our artistic output like this, in quality and quantity, then perhaps we can be optimistic about the state of the arts for the first time in decades.