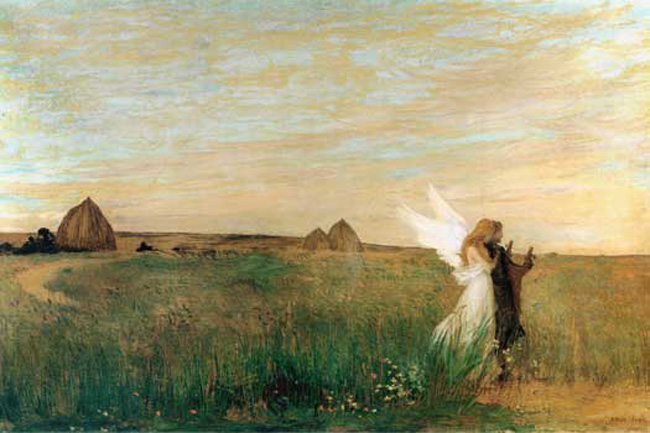 In The Works and Days, Hesiod offers some good, down-home advice. He addresses much of the poem to his brother Perses, who cheated him out of much of his inheritance, encouraging him, and the reader, to give up his dishonest ways and pursue virtue:

Look, badness is easy to have, you can take it by handfuls
without effort. The road that way is smooth and starts here beside you.
But between us and virtue the immortals have put what will make us
sweat. The road to virtue is long and goes steep up hill,
hard climbing at first, but the last of it, when you get to the summit
(if you get there) is easy going after the hard part.

Like any good working man, Hesiod especially emphasises the value of hard work:

Famine is the unworking man’s most common companion.
Gods and men alike resent that man who, without work
himself, lives the life of the stingless drones,
who without working eat away the substance of the honeybees’
hard work; your desire, then, should be to put your works in order
so that your barns may be stocked with all livelihood in its season.
It is from work that men grow rich and own flocks and herds;
by work, too, they become much better friends of the immortals.

Now, The Works and Days is full of pious advice and observations like the second and last lines of that last quotation, and much of the poem has a moralistic tone, but Hesiod devotes at least as much space to practical advice on dressing appropriately for the season, what time of year to plant and when to sail, at what age to marry, as well as reminding us of what days are holy and which are auspicious for various tasks:

Observe the Days that come from Zeus, all in their right order.
Explain them to your workers; that the thirtieth of the month
is best for supervising works, and for doling provisions.
And here follow the days that come to us from the counsellor
Zeus, when men who judge their true nature can observe them.
First of all, the first, fourth, and seventh of the month are holy;
it was on this last that Leto gave birth to Apollo
of the golden sword. Then the eighth and ninth, two days in each month
as it waxes, are excellent for mortal labors.

With so much space devoted to giving advice, the book may could easily have become preachy, but it’s actually one of the most charming books I’ve ever read, like listening to your grandfather reflect on lessons learned throughout his life.

Besides all this, Hesiod also goes into some mythology, describing the various ages of man (the famous golden, silver, bronze, and iron ages), and discussing a few particular myths, like that of Pandora, in more detail.

In The Works and Days, he touches on these myths mostly as a way to illustrate his broader themes. He goes into much more detail, though, in Theogeny. The central narrative is the conflict between the Titans and the Olympian gods, though there are some other brief narrative sections. That’s all fine, and those with a special interest in mythology will certainly enjoy it, but much of the book is more of a catalogue of the gods with the genealogies that ancient peoples delighted in so much, but that modern audiences tend to find rather tedious. If you enjoyed The Iliad’s catalogue of ships, or the Bible’s genealogies, then I can guarantee that you’ll love Theogeny. As much as I enjoyed The Works and Days I have to admit that I found Theogeny tough going. I blame myself more than Hesiod for that, though, because I have only slightly more patience for genealogies than most of my contemporaries, and only a passing interest in mythology, so my lack of enjoyment is mostly a matter of personal preferences.

Now, I read the edition translated by Richmond Lattimore and published by Ann Arbor Paperbacks, which conveniently includes The Works and Days, Theogeny, and The Shield of Herakles all in one volume. A running outline accompanies the first work, with the text of the poem on one page and the outline facing on the opposite page, which isn’t very helpful while reading but does make it easier to scan for a particular passage. Lattimore also has a brief but interesting introduction, genealogical tables, and a glossary, but no annotations. Translating poetry is infamously difficult, and Lattimore’s rendition is serviceable, but not spectacular or memorable.

Both The Works and Days and Theogeny are firmly within the canon of Western literature, referenced often by later authors both ancient and modern, so both are required reading for an educated Westerner. Despite some dry portions, especially in Theogeny, Hesiod’s poetry is enjoyable, and even cosy in some parts of The Works and Days, making it a perfect way to end a day of honest labour out in your fields.