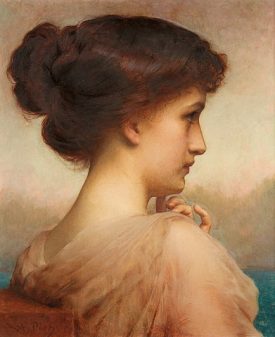 Note: This is republished from Thermidor Magazine, where it was originally posted on November 19, 2017.

When looking across the Western literary canon, it quickly appears that writing is, in a sense, a man’s game. Take a list of recommended authors from before the era of political correctness, and one generally finds only a few women represented. To take a convenient example, Mortimer Adler and Charles van Doren’s list of essential authors from the first appendix to How to Read a Book (which includes fiction and non-fiction) has only one female author, with Jane Austen standing alone to represent her entire sex. Now, that doesn’t particularly bother me; I don’t believe that we should grade on a curve so that we can include mediocrities like Maya Angelou or Rupi Kaur on “great authors” lists. There are, however, a handful of women who even a vile Reactionary like myself will gladly give credit to. Besides Austen, works by Flannery O’Connor, Emily Dickinson, Elizabeth Barrett Browning, and others all have a space on my bookshelf.

By far the longest-standing of all of these, though, is Sappho, widely respected among the ancient Greeks themselves and ever since. When discussing her poetry, though, we quickly run into two problems. First, a minor one, is that we don’t know much for certain about her. She’s hardly unique in this, as the lives of Homer and Hesiod are also largely mysterious. For Sappho, we know that she lived on Lesbos in the early Sixth Century B.C. There are also many stories about her that may or may not be true; translator Mary Barnard’s biographical note in her edition of Sappho’s poems lists some of these:

That she was born in Mitylene, or in Eresus on the same island;
That her birth date was about 612 B.C., or earlier, or later;
That her father’s name was Scamandronymous, or Eurygus, or Simon, or Eunominus, or Euarchus, or Ecrytus, or Semus;
That her mother’s name was Cleis;
That she married a merchant of Andros, named Cercolas, and had a daughter Cleis; or, contrariwise, that Cercolas is a fictitious name, and that Cleis was not her daughter;
That Sappho herself was a prostitute; that she was not;
That, maddened by her hopeless love for Phaon, a ferryman, she threw herself from the Leucadian cliffs […]; or, contrariwise, that she died at home in bed, tended by her daughter, Cleis […];
That the girls whose names are mentioned in the poems – Anactoria, Atthis, Gongyla, Hero, Timas – were her pupils, and participants with her in the religious exercises of kallichoron Mitylene (Mitylene of the beautiful dances); or, conversely, that they were no such thing.

How much of this is true? The name “Cercolas” is almost certainly fake, the prostitution charge can safely be discarded, and the story about Phaon is also unlikely. Some of this information came via Athenian comedians, which is like writing a biography of American presidents based on Saturday Night Live skits, others are possibly legendary accretions. There is a story that she was exiled to Syracuse, which is interesting because it would indicate an involvement in political life. Also, whether she was indeed a priestess, and what her relationship was to the other people mentioned in her work, does influence how we interpret some of her poems.

Ultimately, though, we can only speculate about most of this. Though biography and literary history are interesting in themselves, they sometimes act as a distraction from an author’s actual work. C. S. Lewis wrote in The Screwtape Letters about men who read philosophy and concern themselves with who the writer influenced, who influenced him, and so on – basically considering every aspect of the writer except whether the author’s opinions were true. Similarly, in literature, our main concern should be examining the work under discussion, considering its merits and faults, and maybe even simply enjoying it, if one can imagine such a thing. Biography, interesting as it is, is seldom essential.

In any case, when we turn to examine Sappho’s work, we run into the second problem: almost all of it is fragmentary. Only one of her poems, the “Ode to Aphrodite,” is certainly complete; the rest has been preserved only piecemeal, and often in very small pieces. There are stories of her work being purposely destroyed by some churchman or another because of their poor moral character, but this, like so much else about her, may or may not be true. Whatever happened, we generally only have quotations from later grammarians and literary critics, who seldom quoted entire poems. Rather, the grammarian would illustrate some point about dialect or sentence structure by quoting a line from her work, or a critic may simply refer to her poem by a single line, and assume that you knew which poem he was talking about. It would be as if all we had of Shakespeare’s sonnets came from snippets like a critic saying, “For example, in the sonnet that begins ‘When in disgrace with fortune and men’s eyes,'” and then only that one line survived.

To give a few examples of how dire the situation is, consider these from Peter Russell’s parallel text edition, including the Greek since it’s not as if I don’t have room for it:

The single images we have are often striking, and one could easily imagine a skilled poet writing excellent work around them. In fact, several editions of Sappho’s work aren’t translations but rather “reconstructions,” taking her lines and then building a poem based on them. Though hardly a replacement for the original, lost poems, that does make for an interesting exercise, and any aspiring poets may enjoy the challenge of using these fragments as writing prompts.

Not all is lost, though, and we do have some longer material to allow us a glimpse of what her admirers saw in her work. One example, from Mary Barnard’s translation:

To an army wife, in Sardis:

Some say a cavalry corps,
some infantry, some, again,
will maintain that the swift oars

of our fleet are the finest
sight on dark earth; but I say
that whatever one loves, is.

This is easily proved: did
not Helen – she who had scanned
the flower of the world’s manhood –

choose as first among men one
who laid Troy’s honor in ruin?
warped to his will, forgetting

love due her own blood, her own
child, she wandered far with him.
So Anactoria, although you

being far away forget us,
the dear sound of your footstep
and light glancing in your eyes

Even in translation and with Barnard’s short, choppy line lengths, this is good stuff and she serves as a good complement to the two giants of Greek poetry, Homer covering the heroic in his work, Hesiod the pastoral, and now Sappho the domestic world of friends and lovers.

As for the fragments, many are too short to appreciate on their own, but a few do give us enough to savour. Quoting Barnard’s translation again:

The moon and then
the Pleiades
go down

The night is now
half-gone; youth
goes; I am

This may be short, but not terribly shorter than a few of the Homeric Hymns, like the “Hymn to Demeter” (nine lines in Jules Cashford’s translation), or the “Hymn to Asklepios” (eight lines). Perhaps the best way to enjoy this type of work is to jump across Asia and borrow from the Japanese approach to poetry, which traditionally favours short work of a few lines focusing on a handful of images. One can easily imagine “Tonight I’ve watched” sitting alongside Lady Akazome Emon’s contribution to the Hyakunin Isshu (Frank Watson’s translation):

I waited
But should’ve slept –
Alas, the night grew late,
And I saw
The setting moon

The key to appreciating poetry of this type is to read it slowly, imagining the scene, and savouring the imagery. In other words, think of these types of poems not as narratives, but as essentially verbal paintings.

Fragments are sadly common when dealing with ancient literature, and are often frustrating to work with. In Sappho’s case, the situation is such that it’s hard to confirm whether ancient praise of her work was justified or not. Based on what does remain, though, I’m inclined to agree with the Classical assessment. Though fragments can never be as satisfying as a complete poem, there’s still enough to fully justify working through and appreciating what remains.