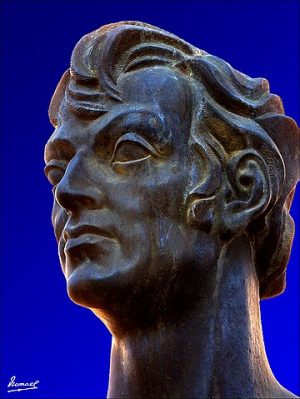 It makes one feel good about the brotherhood of Man to know that, in all times and all places, we can all agree that fart jokes are universally funny. You won’t find those in Virgil, by the way.

Anyway, there will always be those who disapprove of this sort of thing, and Martial was well aware of it. In the introduction to Modern Library Classics’ edition of the Epigrams, Shadi Bartsch notes that after the Aeneid many Roman poets attempted to imitate Virgil but with rather mixed success, to put it charitably. Nonetheless, the epic was the high status form, and Martial occasionally gives a defence of his style of verse, as in Book IX, Epigram 81:

Readers and listeners like my books,
Yet a certain poet calls them crude.
What do I care? I serve up food
To please my guests, not fellow cooks.

That said, Martial was clearly concerned with his own reputation, and in several poems he laments the difficulty of finding patrons for good poetry, and complains of how praise is seemingly given only to authors who are long dead. In Book V, Epigram 10 a friend asks him about this, and he answers:

The character of envy is to value
The ancients higher than the moderns. So,
Nostalgically, ungratefully, we go
For shade to Pompey’s antique colonnade,
So old men praise the ugly temple made
Uglier by Catullus. You read Ennius, Rome,
When Virgil was available nearer at home;
In his own century Homer’s public found him
Uncouth; Menander’s audience seldom crowned him
Or even clapped; though Ovid was a poet,
Corinna was the only one to know it.
But there’s no cause, my little books, to worry:
If glory must be posthumous, why hurry?

Of course, I among many others frequently encourage people to read old books, but Martial is right that living authors deserve praise, as well. Good authors, anyway – there are plenty of writers who receive more than their fair share of wealth and fame today, but more because of fads and marketing than talent. When a good book does come along by a talented author, though, we can and should take a break from the ancients and support our contemporaries.

Back to Martial, though, so far I may have given the impression that he was rather bitter, but this isn’t the case. He could, at times, be self-deprecating; in Book I, Epigram 117 he tells a friend where to buy a copy of his latest book and how much it costs. He then adds, “Do I hear you say, ‘You’re not worth that expense’? / Lupercus, you’ve got sense.” Also, in Book XI, Epigram 17:

Not all the epigrams I write
Belong to naughtiness and the night.
You’ll find a few that can be read
Before midday, with a clear head.

Well, that’s quite true. Like Catullus, Martial may be known for his insults and obscenity, but he did have some range and did write several more conventional poems of the kind that people like Lord Macauley would’ve been more likely to approve of. Book XII, Epigram 31, for example, is a pleasant pastoral poem about his home in Spain, given to him by a friend who, unlike the subjects of many other epigrams, apparently actually did something for him:

Wood, fields and streams, this latticed shade
Of vine, my conduits and cascade,
My roses which can challenge those
That super-fertile Paestrum grows,
My vegetables, frost-immune
And green in January as June,
My private tank where tame eels swim,
My dove-cote just as white and trim
As its own inmates – everything
In the small realm of which I’m king
Was given me by my patroness
And friend, Marcella (whom heaven bless),
When I returned to Spain and home
After thirty-five years in Rome.
If Nausicaa’s father were
To make me the inheritor,
Of all his gardens and his throne,
I could say, “I prefer my own.”

Perhaps Martial’s most moving poems are those written for his slave girl Erotion, who died as a child. This one is from Book V, Epigram 34.

To you, my parents, I send on
This little girl Erotion,
The slave I loved, that by your side
Her ghost need not be terrified
Of the pitch darkness underground
Or the great jaws of Hades’ hound.
This winter she would have completed
Her sixth year had she not been cheated
By just six days. Lisping my name,
May she continue the sweet game
Of childhood happily down there
In two such good, old spirits’ care.
Lie lightly on her, turf and dew:
She put so little weight on you.

The last two lines are, in my opinion, particularly powerful, and though this isn’t the style of poetry Martial is known for this may still be his most famous individual epigram. If you do a web search for it you can find many sites reproducing and discussing it.

Finally, the translation used here is that of James Michie, published by The Modern Library Classics. It’s only a selection of the complete Epigrams, but is enough to give one a good sample of Martial’s work. Michie, as you’ve likely noticed, uses rhymed couplets and other simple rhyme schemes, which adds an appropriate sense of playfulness to most of the epigrams. Of course, the weakness to this approach is that Latin poetry did not rhyme, and Michie does have to pad out several lines to keep his metre mostly consistent. In English this isn’t really noticeable, but I’m sure purists won’t be happy about it (of course, purists will likely just stick with the Latin and ignore the translations, anyway).

Some translators use prose instead of verse, such as the anonymous 1897 translation available at Tertullian.org or Gideon Nisbet’s, published by Oxford World’s Classics. Nisbet defends this choice, saying he did so because “Martial is conversational rather than poetic (though he has moments of elegiac tenderness), because I am not a poet, and because attempts to put Martial into verse typically blunt his concision and point.” These are all fair points; I’m ideologically opposed to treating poetry as if it’s prose, but it is worth looking into a few options if you’d like to read the Epigrams. Oh, and be aware that the anonymous translation at Tertullian.org omitted some of the more obscene epigrams, similar to how older translators of Catullus omitted or bowdlerised his more obscene verses.

Whichever version you choose, though, I think you’ll enjoy the Epigrams. Martial’s verse may not have the magnificence of the Aeneid or Metamorphoses, but of all the Classical authors I’ve read so far he does have this advantage: he’s easily the most fun to read, and that’s certainly worth something.