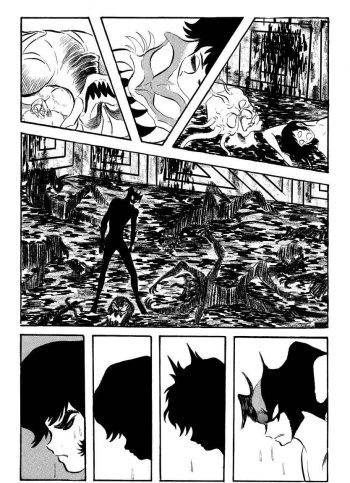 The protagonist is high schooler Fudo Akira, who isn’t exactly a wimp but definitely doesn’t have much backbone. His friend, rich genius Ryo, asks for his help with something and takes him to a rave crazier than a Chick tract, where crap happens and he ends up merging with a demon, making him part-devil and part-man, Devilman. So, now that he has awesome powers (and a far more aggressive personality) Ryo explains that demons are roaming the earth seeking to destroy humanity, and asks for his help in stopping them. Those who’ve seen Crybaby will know what’s up, and those who are new to Devilman are in for a hell of a ride. As one may expect from only two omnibus volumes, the story is short and keeps up a brisk pace throughout. The first 2/3 or so is more-or-less episodic, with most chapters using action scenes to nudge the plot forward, though a handful of time-travel themed chapters are, frankly, just filler and Crybaby was right to exclude them. The last third is by far the most intense, with betrayals, characters dying left-and-right, and leading up to a contender for the bleakest ending I’ve ever seen in a work of fiction. 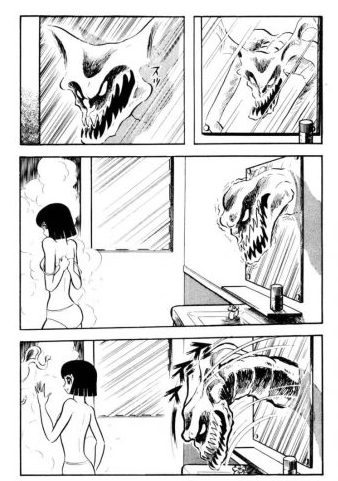 Oh, and for those wondering, yes the book is as full of nudity and violence as you’d expect if you’ve seen Crybaby (or if you know who Go Nagai is). The adaptation ramped it up to 2018 standards and beyond, but was very much in the spirit of its source material.

The artwork is cartoony and old-fashioned, but mostly effective. I can’t decide if a more realistic approach would’ve suited it better or not; suspension of disbelief is generally easier with less realism, but the horror of what’s really going on in this plot isn’t really expressed by the sometimes goofy artwork. For the first part of the story it doesn’t make much difference, as it’s essentially episodic monster-of-the-week stuff, but when Akira himself gives the reader a warning that things are about to get serious 2/3 through there’s more of a disconnect between the plot and the art. I’ll let those more familiar with the ins and outs of the art world handle the details on this, though.

The bleakness of the ending does give me some pause in recommending it, but in Nagai’s original telling it doesn’t feel quite as brutal as the recent adaptation – that, or it’s less powerful because I expected it this time. Either way, if you’re looking for an uplifting story you’ll need to look elsewhere. I should also mention that the general flow of the story could’ve used a little work. I already mentioned that a few chapters could easily have been cut entirely, while other plot points and characters would have benefited from some more time and exploration. I’d be curious to know how much of the plot was planned out – Devilman was originally conceived as an anime and Nagai worked on both, and he wanted to make the manga a more mature version of the story. In fact, the two ran side-by-side as the manga began serialisation only a month before the anime debuted. I’d assume that the ending was planned, but I don’t know if the weaker chapters are just filler or if they were thematically important plot points that missed the mark.

Speaking of themes, Nagai intended for Devilman to have an anti-war message; some of this comes through with the tyrannical and counterproductive government reaction to demonic attacks, and the “devilman” concept as an analogy to the draft. More interesting is the exploration of the dark side of human nature once the general public becomes aware of the existence of demons, and the paranoia and brutality that ensues. Akira himself is also a tragic figure, whose noble desire to help everyone has a terrible consequence. 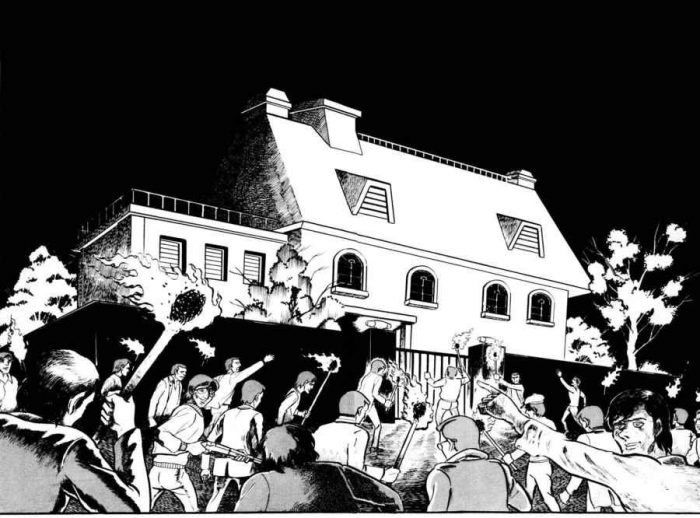 Go Nagai is such a major figure in manga history that anyone who takes the medium seriously should be at least somewhat acquainted with his work. A few caveats aside, I’d say that Devilman has aged well, and is worth reading even aside from any historical interest. It’s good enough, in fact, that I’ll likely check out the other adaptations and, perhaps, review them at some point as well.