Now, before going further, I’ll just offer a brief explanation of what mahjong is. You have a set of tiles (144 in a Chinese set, more or less in other styles) consisting of three suits (bamboo, circles, and characters, equivalent to playing card suits) numbered 1-9, and honours tiles. There are four of each tile, e.g., there are four of the east wind honour tile, four of the one of bamboo, etc. The game is played with four players and on each turn you draw one tile and discard one, trying to form sets of three or four tiles (similar to rummy, as said above) and eventually melding all of your tiles into a winning hand. You can also claim other players’ discards. There’s more than that, of course, but that should be enough for now. Tom Sloper can help you out if you want to know more.

With that out of the way, one issue that a few people have brought up to me is that they’re interested in mahjong but aren’t really sure how to go about learning to play. I’m still a beginner since I’ve only played for a few months now, but my method was to read Tom Sloper’s book The Red Dragon & the West Wind, which covers both Chinese Official and American style mahjong. This was the same one I bought years ago, and it’s very helpful. After that, I tried out several different mahjong apps and programs but settled on an iOS app called Let’s Mahjong, which is also available for Android. It’s almost the only software of its kind that has a decent aesthetic, single-player and online multiplayer, and doesn’t require you to make an account, buy “tokens” of one kind or another, or any other such nonsense.

If you’re wanting to learn, that’s a good way to do it. If there’s a mahjong group in your area, you may also want to get in touch with them to see if they can teach you.

What about other software? Well, the only one I could see using is MyJongg, which is for American style. Mahjong Time has an actual leaderboard which Let’s Mahjong lacks and has tournaments for real money, but an ugly aesthetic. That’s also true of Red Mahjong, which is an offshoot of Games Colony. Finally, there’s Four Winds Mahjong which actually does look and play well but the full version costs €30 and you can’t play online.

There are also a lot of books about mahjong out there, more than I’d expected given that mahjong isn’t terribly well-known in the United States. Sloper’s is the best for learning to play, but David Pritchard’s Teach Yourself Mahjong is also a good resource, and includes a section on strategy for once you’ve learned the basics. David H. Li’s The Happy Game of Mah-Jong, which has such a good title I stole it, is a pleasant read but not as good for learning to play. He does have some good commentary on several sample hands, though, as well as a lot to say about mahjong etiquette. He’s a big proponent of keeping the rules and scoring hands simple, and his chapter on etiquette is a good addition for those planning to play in-person and not just online.

The Great Mahjong Book, by Jelte Rep, has a lot of interesting information and pictures for those already into mahjong, but probably won’t be of great use to those who just want a helping hand in learning to play. Dr. Chung Wu’s An Advanced System for Playing Mah Jong spends a lot of time describing and defending a new scoring system for the game, basically making him an opposite of David H. Li, but he also includes some good commentary on sample hands and advice for strategy. Finally, there’s Dr. Tong Seng Tjoa’s Mah Jong Fun, which is a short book aimed at teaching beginners how to play but isn’t as useful for that purpose as Sloper or Pritchard. I did notice that Drs. Tjoa and Wu were both medical doctors who wrote about mahjong as essentially amateurs, which I actually like because it’s old-school and charming. If that’s not enough mahjong literature for you, Tom Sloper has you covered.

So that’s all great, but the real fun of any board or card game is playing with other people. I found my mahjong group via Meetup.com. It’s a good group of about fifteen or so people, mostly Asian aside from a few white guys and the very old ladies who play American style mahjong, which I understand is typical of the American game. One mildly amusing thing is that, since mahjong is popular in so many different countries, there are multiple names for each tile. It’s not hard to catch on to what’s what, but while playing through a game one gets to hear each discarded tile referred to by its American name, Cantonese name, Mandarin name, and English-translated Chinese name. I use the American terminology.

Finally, my mahjong set. The one I bought years ago has vanished. I don’t know if I sold it, threw it away, or if the Mexican dudes who moved my stuff to my current apartment stole it to sell on the black market. Whatever happened to it, a couple weeks ago I went ahead and bought my own new mahjong set from Yellow Mountain Imports. I went with their black “Jet Set” even though black is an unusual colour for mahjong sets and it only uses Chinese characters, making it a little awkward for new players, for the same reason I do most things. It looks cool. 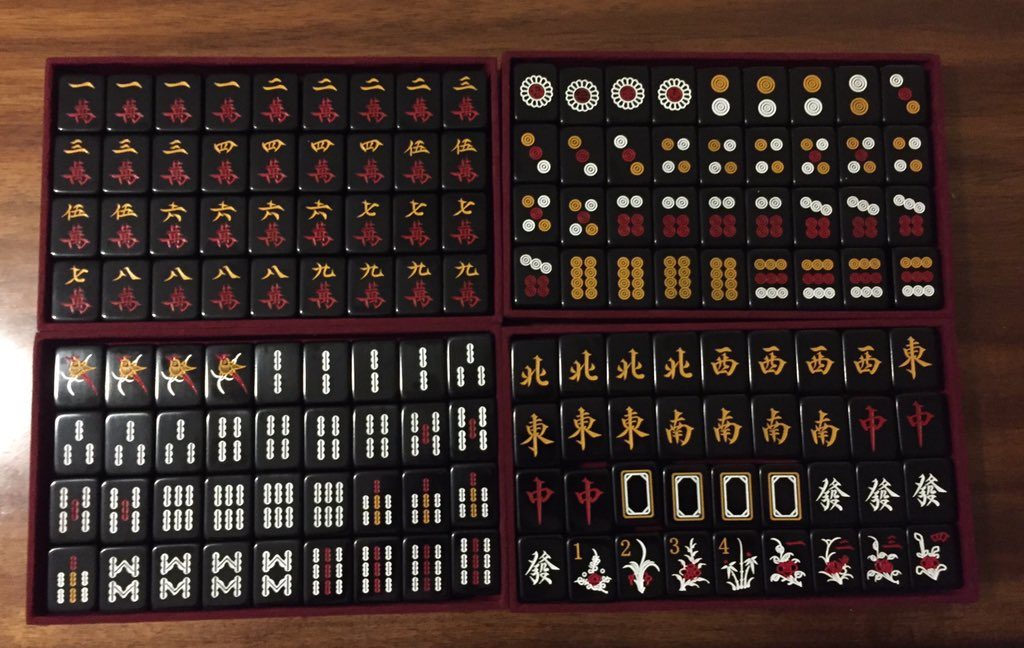