The King of Sports

The biggest surprise I’ve ever given my parents was last year when I told them that I was getting into professional wrestling. My online presence here and on Twitter reflects my real-life interests and hobbies closely, and as you can tell from a scan of my article and review index most of what I read and watch leans toward high culture. I’ll dip into popular culture with things like Devilman now and then, but overall I’m more likely to be reading French poetry or something. I have little interest in sports generally, and most guys who are into wrestling started watching when they were young. I remember several friends in middle school talking about it, but I had little interest. So what happened?

Well, over the last few years I’ve noticed that a lot of people in my Twitter circles are into wrestling. Though hardly as visible as the Anime Right, Right-wing Pro Wrestling Twitter is surprisingly big even if its members tend to mask their power level. I had a few friends in particular who enjoyed it and when they gave an open invitation to watch an upcoming NXT event I figured I’d see what it’s all about. Needless to say, I enjoyed it, watched a few recommended matches from yesteryear, joined in with almost every group-watch this group of friends has done since, and eventually subscribed to NJPW’s (New Japan Pro Wrestling) online streaming service.

It’s sometimes difficult to explain why we enjoy the things we do, but for pro wrestling I can point to a few things. A big one is the social aspect, which is largely what got me to watch that first event. It’s fun watching something with friends and talking about a shared hobby. As for the wrestling itself, I love the athletic performance. Yes, it’s scripted, but so are most things on TV so who cares. These guys are doing incredible things in the ring and it’s great fun to watch. 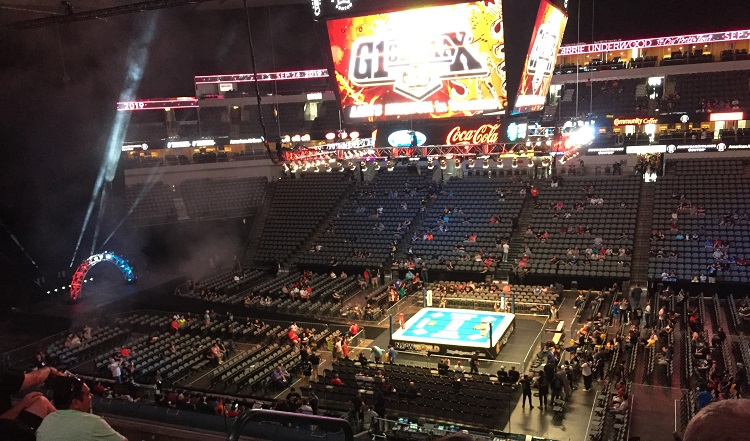 Getting ready to see NJPW in Dallas

Occasionally wrestling fans will defend their interest by appealing to the storylines, as in this popular video. I do appreciate having some context for a fight, but I don’t need any more than your typical sporting event has. Frankly, most of the storylines I’ve come across, including those summarised in that video, aren’t terribly impressive. One acquaintance pointed out that I got into the sport well after the high point of strong storylines. That may be true, but I can only judge the wrestling I have in front of me, so as things are if I want a deep plot I’ll read a book.

One thing about pro wrestling that I learned quickly is that there are a lot of promotions out there. The average American, from what I can tell, is only aware of the WWE, but even within the United States it’s far from alone. Incidentally, I’ve hardly watched any WWE content. I know a few people who follow their subsidiary NXT and I do watch their events with them once in a while, but I rarely hear anything good about WWE itself so I’ve never really bothered with it. I have watched some ROH (Ring of Honor) and everything so far from new promotion AEW (All Elite Wrestling), whose matches are wildly hit-and-miss. Throw in a few glimpses of Impact Wrestling and a live event with Metroplex Wrestling (MPX), a local promotion here in Dallas/Fort Worth, and that’s roughly my first year of wrestling viewing.

Mostly, I follow NJPW. I hear the cries of “weeb!” coming now, and I’m in no position to fully deny the accusation. That said, I’ve genuinely enjoyed their wrestling the most out of any promotion I’ve seen so far. My favourite wrestlers tend to be those with relatively simple styles, whose matches look more-or-less like an actual fight but with some added flair and machismo here and there. For those already familiar with the wrestling world, it’s probably enough to know that Ishii Tomohiro is my favourite wrestler. NJPW has a good variety of wrestlers and styles, staying grounded enough (by pro wrestling standards) that I can take it seriously while still having some extra flair. I don’t know any promotions that are overly serious, but one of AEW’s problems is that they get too silly at times.

Now, streaming is cool and all, but any sport or music fan knows that there’s nothing like a live performance, and I have attended two live events. The first was on July 6 at the American Airlines Center in Dallas, which hosted the first night of NJPW’s G1 Climax, an annual tournament for heavyweight wrestlers. NJPW has had very few events in the United States and they are trying to break into the American market with more events already announced down the road. Most of those are nowhere near me, though, so the opportunity to see most of my favourite wrestlers live was a great experience, and most of the matches delivered on my high expectations. Really, there were only a couple downsides. One is that the crowd wasn’t as large or energetic as I’d expected. There were an oddly high number of empty seats, and though the people on the first level were into it, my section up in the terrace had all the energy of Jeb Bush. For instance, the people on the lower levels got up for two standing ovations, one for NJPW legend Jyushin Thunder Liger, who plans to retire in less than a year, and when Tanahashi Hiroki entered (after Tanahashi they remained standing for his opponent, Okada Kazuchika). No one in my section stood either time except for me and a few guys off to my left. The rest hardly even applauded.

Also, despite the relatively low attendance, I still had to enter the G1 Linemax for merchandise and they sold out of the two event-exclusive t-shirts. I haven’t been linecucked this hard since I failed thrice to get Yuasa Masaaki’s autograph at AnimeFest 2017. (Long story short: Yuri on Ice fans are still and ever shall be my mortal foes).

Anyway, since I enjoyed that one of my friends suggested checking out local promotions. North Texas has four that I found, but I decided to go to MPX’s weekly show. Their event centre is in a strip mall and can’t seat much more than a couple hundred people, and the matches themselves were more-or-less like larger promotions but with a fraction of the budget. That said, the wrestling was still good and that crowd was lit. From the first bell they were completely invested, cheering the faces and booing the heels with all their might, shouting personalised insults that the heels could actually hear and respond to, and joking around with other audience members, several of whom obviously knew each other and one of whom introduced himself to me since we were sitting next to each other.

MPX’s venue is rather more modest

Also, this event featured probably the last match with MPX for Leva Bates, who’s now signed with AEW. Unfortunately, her character is the extremely lame Librarian. Let’s hope AEW finds something better for her soon.

So what’s next? I do plan to check out the other local promotions and will return to MPX at some point; I also already have a ticket to see a taping for MLW (Major League Wrestling) Fusion. I’m not very familiar with them, but the one episode of Fusion I have seen was alright and they have a wrestler by the name of MJF, who’s a 10/10 heel. So, there’s a lot to look forward to. I don’t expect to turn this into a wrestling blog, but expect to see the subject pop up once in a while.