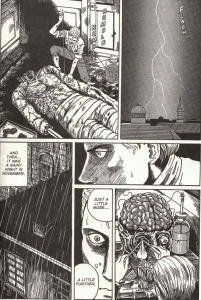 The plot is essentially Mary Shelley’s Frankenstein as a short story. Ito is very faithful to the original novel, down to keeping the framing device of Frankenstein narrating his story to an arctic explorer. He does condense much of the story, but the essential points are there and the theme is fully intact; the only major departure is with the monster’s wife. I won’t spoil it, but as a few general comments I’ll say that I appreciate the involvement of Frankenstein’s friend Henry Clerval. Because the story is condensed we don’t get to see a lot of the side characters, but Clerval getting some extra “screen time” lets us become more invested in his fate, and his presence also explains Frankenstein’s choice of whether or not to finish building the creature’s wife.

The creature’s reaction to the final result of this second experiment is more emotional than in the novel, making the creature look more passionate and less calculating. I prefer Shelley’s characterisation of the monster, but I’m reluctant to say that it’s objectively better. One thing I didn’t like is that the head he finds for Frankenstein to use for the wife makes him come across as spiteful and unreasonable, reducing the sympathy we might have for the monster. Part of what makes Frankenstein excellent is that the creature is in many ways sympathetic; though we cannot approve of his revenge against his creator, it is at least understandable. Adding one additional slap in the face to Frankenstein just pushes him farther into “villain” territory.

Despite that, though, Ito’s adaptation of Frankenstein is excellent, enough so that I wish it were longer so that he could have either drawn more from the original novel or explored more alternate paths for the story. Because it’s fairly short, Viz’s edition of the book includes a few additional short stories. Since Viz’s hardcover edition is just a nice book overall (much the same as their editions of Gyo and Uzumaki), it’s an easy one to recommend for any horror fan. 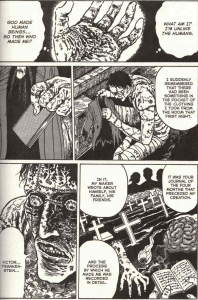