This album was something of a lucky find for me. About seven years ago or so I was browsing the vinyl section at a Half Price Books and stumbled across Tales. I wasn’t very familiar with APP outside a couple hit and that Parsons was involved with Pink Floyd, but those were enough to pique my interest. Also, I liked the idea of a concept album based on Poe’s stories and besides, used vinyl was very cheap aside from collectible stuff. I wouldn’t call it a great album, but it’s right up my alley and is quite good. 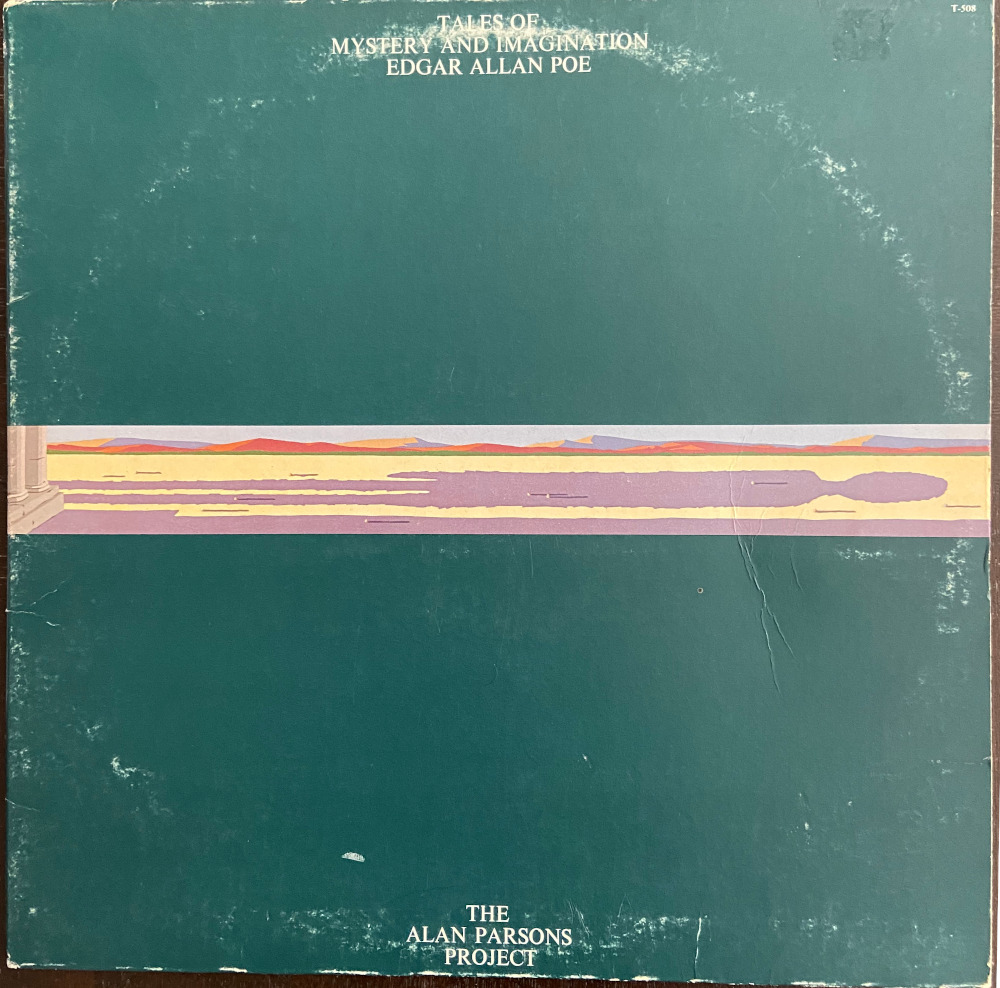 My vinyl copy of the album

Now, I do need to add a caveat before getting in to the review: I have no idea how to review music. I’ve only touched on music once previously while talking about serial experiments lain, because I have no serious background in music and lack the knowledge and vocabulary to assess and describe it. So, though I’ll touch on the music, I’m going to focus on the lyrics and how APP adapted Poe’s source material for the album.

So, the first track is “Dream Within a Dream,” which is spoken (all the lyrics in this post are taken from this site).

“For my own part, I have never had a thought which I could not set down in words,
with even more distinctness than that which I conceived it.
There is however a class of fancies, of exquisite delicacy, which are not thoughts, and
to which, as yet, I have found it absolutely impossible to adapt to language. These
fancies arise in the soul (alas, how rarely!) only at epochs of most intense tranquility
– when the bodily and mental health are in perfection – and at those mere points of
time where the confines of the waking world blend with the world of dreams.
And so I captured this fancy, where all that we see or seem is but a dream within
a dream.”

There’s really not much connection to the original poem:

Take this kiss upon the brow!
And, in parting from you now,
Thus much let me avow —
You are not wrong, who deem
That my days have been a dream;
Yet if hope has flown away
In a night, or in a day,
In a vision, or in none,
Is it therefore the less gone?
All that we see or seem
Is but a dream within a dream.

I stand amid the roar
Of a surf-tormented shore,
And I hold within my hand
Grains of the golden sand —
How few! yet how they creep
Through my fingers to the deep,
While I weep — while I weep!
O God! Can I not grasp
Them with a tighter clasp?
O God! can I not save
One from the pitiless wave?
Is all that we see or seem
But a dream within a dream?

One interesting note is that the narration is done by Orson Welles. I have no idea what he thought of the album or if he even cared, since he was willing to do a lot of projects to raise money for work he did care about. Regardless, he does a fine job and he does add a little gravitas to the album, even if I’d have expected someone like Vincent Price or Christopher Lee on a project like that.

Anyway, APP did borrow the final couplet of each verse from the source material, and the music could fit either the original or the adaptation. Thematically, though, they’re effectively two separate things and APP’s song is not only not really based on Poe, but scarcely even inspired by it except perhaps as using the title and final couplet as a writing prompt. The rest of the album is better from the perspective of faithfulness, though, and this is a fine introduction. Half the piece is instrumental, and it leads into the next track, which is obligatory in any Poe adaptation, “The Raven.”

The original is rather long so I’ll just link to the text at the Poetry Foundation. The adaptation is typical of what we’ll see for the rest of the album; the lyrics give a bare outline of the story, but the music perfectly gets across the tone of the original. There’s little of Poe’s build-up to the raven’s appearance, none of the conversation with the raven, and at the end we have a narrator who’s just stuck with this bird hanging out in his house without any reason given for why it’s there or why the narrator is so disturbed by it. I think the adaptation works anyway, though, because APP can safely assume that the audience is at least somewhat familiar with Poe’s original. It’s less a work that stands on its own and more of a complement to Poe.

Also, honestly, I suspect that Poe would approve of the music carrying the song. His primary goal in his stories and poems was to convey a mood, an atmosphere, and the Alan Parsons Project did that in a way appropriate for the medium. One odd thing about the song is that the voice distortion gives it a mechanical, robotic sound, which at first seems like it would be out of place with 19th Century Gothic literature. What it does, though, is add a little unreality to the singing, a little uncanniness, adding to the sense of unease in a subtle way. 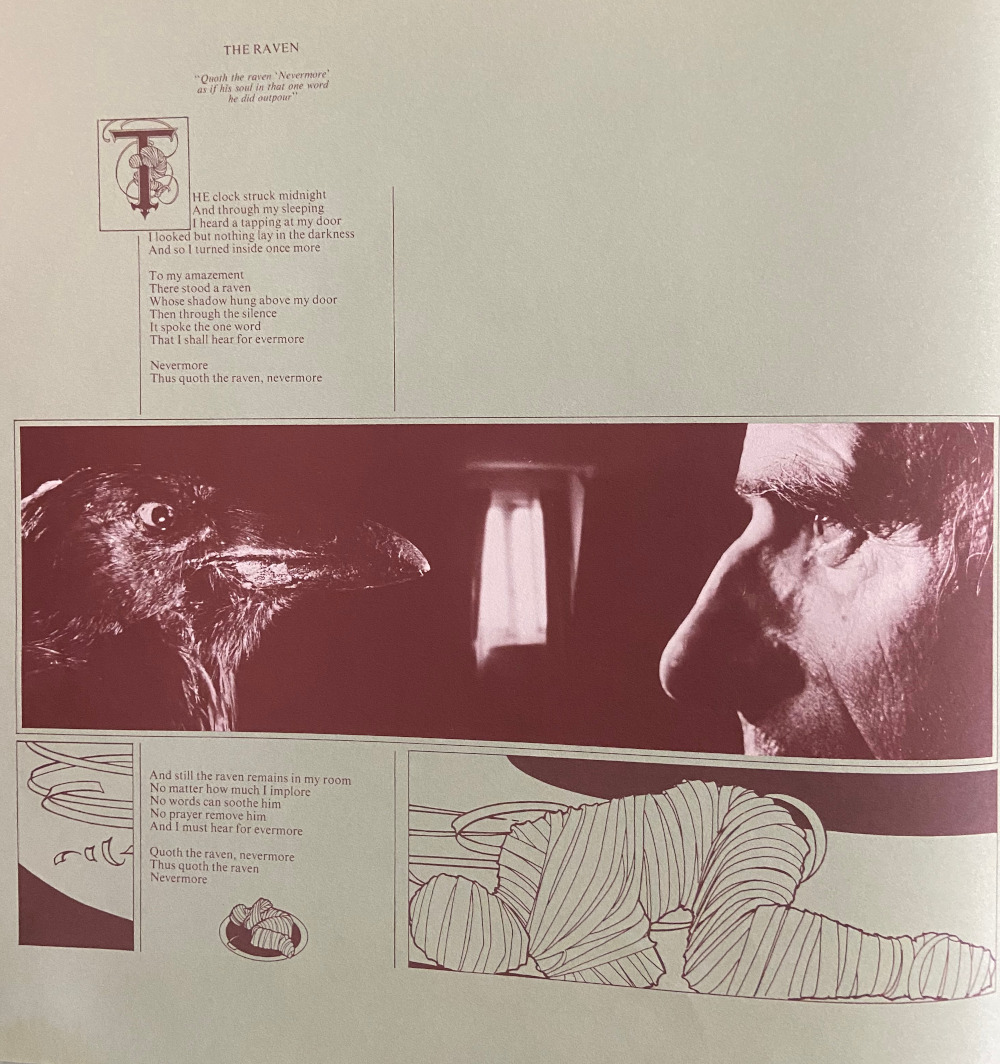 From the inside of the album

Not so subtle is their treatment of “The Tell-Tale Heart.”

So for the old man
Ashes to ashes, earth to earth and dust to dust
No one will see me
No one with guilt to share, no secret soul to trust

Take me away now
But let the silence drown the beating of his heart
I can’t go on
Let me flee from this guilty secret that I carry
Please, set me free now

Once again, we get an abbreviated version of the story, and the main points are basically here. The lyrics on their own do a fine job conveying the mood of the original. Like in Poe, we have a narrator trying to convince us he isn’t mad (spoiler: Poe’s protagonists are always mad). Aside from the slower tempo in the “And he won’t be found at all” verse APP conveys the narrator’s madness by his tone of verse and by yelling over much of the song. Not, say, “Okkusenman” levels of yelling, but quite a bit. He certainly sounds crazy, though the shouting and cacophonous music make this the least pleasant song of the album.

We get a break, though, in “The Cask of Amontillado,” the original of which is a contender for my favourite of Poe’s stories.

It’s a much slower song than “The Tell-Tale Heart,” but as my fiancée said, hearing just the opening music and not knowing or remembering the source, it sounds creepy or sinister. The more melodious tone does a fine job conveying Montresor’s high class, but it’s certainly not comfortable. Like “The Raven” it benefits from familiarity with the source, but it’s not exactly difficult to piece together what’s going on. All told, it’s the most successful adaptation of the source on the whole album.

Next, things lighten up a little bit both musically and lyrically with “(The System of) Doctor Tarr and Professor Fether.”

It’s probably the most enjoyable song on the album, but what does it have to do with the source? Well, the narrator’s whole trip to an insane asylum is cut out, and there’s not much borrowed from Poe besides the names Dr. Tarr and Prof. Fether. The song is thematically of a little more interest if you know the context of the asylum, and the music at the end calls back to “The Raven,” adding a more sinister feel to the song.

Up next is a multi-part song, “The Fall of the House of Usher.” The “Prelude” is spoken by Welles again, while the other parts, “Arrival,” “Intermezzo,” “Pavane,” and “Fall,” are entirely instrumental.

“Shadows of shadows passing. It is now 1831, and as always, I am absorbed with a
delicate thought. It is how poetry has indefinite sensations, to which end music is an
essential, since the comprehension of sweet sound is our most indefinite conception.
Music, when combined with a pleasurable idea, is poetry; music, without the idea, is
simply music. Without music, or an intriguing idea, colour becomes pallor, man
becomes carcass, home becomes catacomb, and the dead are, but for a moment,
motionless … “

I suppose it works as a soundtrack to the original, and I have no problem with the music. One could think of it as a more modern attempt at a tone poem. Because it’s instrumental, though, there’s no essential connection to Poe. They could’ve titled it something else and nobody would be reminded of “Usher” listening to it. Honestly, though I have nothing against instrumental music of course, it’s a little disappointing and out-of-place on a concept album like this. Sorry to the tone poem defenders out there.

The album closes with “To One in Paradise.”

“And all my days are trances,
And all my nightly dreams
Are where thy dark eye glances,
And where thy footstep gleams–
In what ethereal dances
By what eternal streams.”

Thou wast that all to me, love,
For which my soul did pine—
A green isle in the sea, love,
A fountain and a shrine,
All wreathed with fairy fruits and flowers,
And all the flowers were mine.

Ah, dream too bright to last!
Ah, starry Hope! that didst arise
But to be overcast!
A voice from out the Future cries,
“On! on!”—but o’er the Past
(Dim gulf!) my spirit hovering lies
Mute, motionless, aghast!

For, alas! alas! with me
The light of Life is o’er!
No more—no more—no more—
(Such language holds the solemn sea
To the sands upon the shore)
Shall bloom the thunder-blasted tree,
Or the stricken eagle soar!

And all my days are trances,
And all my nightly dreams
Are where thy grey eye glances,
And where thy footstep gleams—
In what ethereal dances,
By what eternal streams. 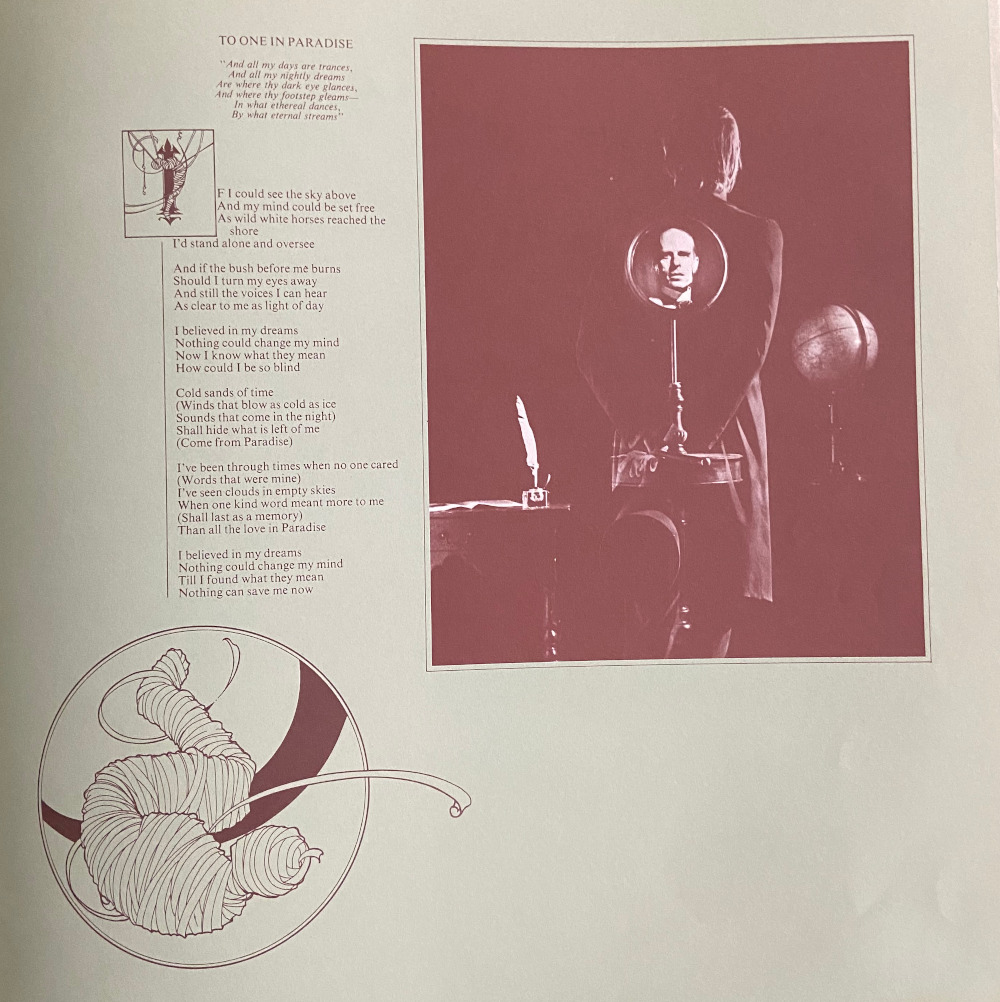 Also from inside the album

So there you have it. It may not be a masterpiece, but I love this album even if I could do without “Usher.” Both versions of Tales are, for me, essentials of the Halloween season and since both are cheaply and easily available, why not check it out?